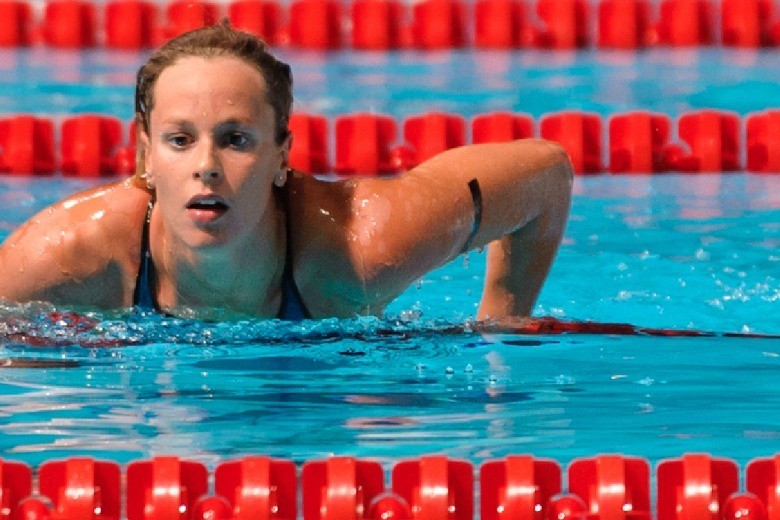 Was Federica Pellegrini's semi-finals performance in the 200 free for real? Is she back? (Photo: Victor Puig/victorpuig.com)

Day 4 finals of the 2013 FINA World Championships, swimming portion, begin at Noon Eastern Time in the United States on Wednesday, July 31st at the Palau Sant Jordi in Barcelona, Spain. Here’s a look at the events that we’ll see in tonight’s finals session:

A reminder of all of the links you need to follow Wednesday’s finals session is available here.

There are some really great races tonight, not the least of which will be the women’s 200 freestyle. A revitalized Federica Pellegrini leads the way; a more-rested-than-expected Missy Franklin (after scratching the women’s 50 back semi); Camille Muffat looking more relaxed than in her first few races; and Shannon Vreeland looking like she’s saved up some steam to close her 200 free well.

The men’s 50 breaststroke final should be quite the race as well, though hopefully this time the times don’t plummet like they did in the 50 fly final. After the semi’s, the World Record is still in play, but Cameron van der Burgh won’t be swimming alone. Slovenia’s Damir Dugonjic will be right next to him.

The men’s 800 free suddenly doesn’t look like as much of a ‘sure thing’ for Sun Yang as it once did, with Canadian Ryan Cochrane swimming well and Sun not swimming as well as he did in London. Still, though, the reality is that Sun is a big favorite, and Cochrane winning that race would be a significant upset.

The women’s 200 fly is as of yet without any spectacular swims, but it is a very tight field, with 7 swimmers all sitting within 6-tenths of each other. Look for the true favorites to emerge from tonight’s semifinals, especially with the Chinese overall not swimming great at this meet so far. The most likely candidates to start to pull away are Spain’s Mireia Belmonte and Hungary’s Katinka Hosszu, but then again they both have a lot of meters under their belts already at this meet as compared to someone like American Cammile Adams.

There’s also a potential for heartbreak in the men’s 100 free, as James Magnussen was the top seed by an astonishing 8-tenths of a second, but Nathan Adrian was only 12th in 48.93.Marcelo Chierighini from Brazil, Adam Brown from Great Britain, and Sebastiaan Verschuern from the Netherlands are other guys who are on the cusp of elimination headed into the semis, as they all held seeds between 9th and 16th place after prelims.

200 Fly M- Le Clos SMASH. He looks unbeatable. Just toying with the field. Korzeniowski and Clary for the medals.

200 Free W- Pellegrini SMASH. Wouldn’t have said that yesterday. But Missy has the 50 Back (stupidly), Muffat looks flat, and nobody else is looking 1:55 lowish. Missy and Muffatt for medals.

50 Breast M- Van Der Burgh SMASH. He’s the only one clearly capable of a 26-mid. Will be a crapshoot for the rest of the medals. I’ll say Dugonjic and Skagius for medals.

800 Free M- Sun Yang SMASH. Looked easy this morning, Mellouli and Jaeger will chase him for the medals.

I wish de Deus could try for a medal too.

I almost agree with you on others, but you are not counting Cochrane And Pal on 800 free..

The women’s 200 free will be the best race of the final session tonight. I don’t see le clos and sun yang losing in their finals tonight.

The Lioness of Verona has been playing a very cagey game. I believe she has been training for this very event in spite of all the smokescreen about giving the free strokes a rest this year, which was primarily to deflect all the glare of the public attention and attendant expectations that would she otherwise have have to cope with. Pellegrini is very, very competitive, and I think she wasn’t too pleased when the buzz in Shanghai was revolving round how an upstart young American swam faster than the World Champion. Add to that her subpar performance in London, and she will want to prove a point or two tonight, after having very successfully pulled the wool over all our… Read more »