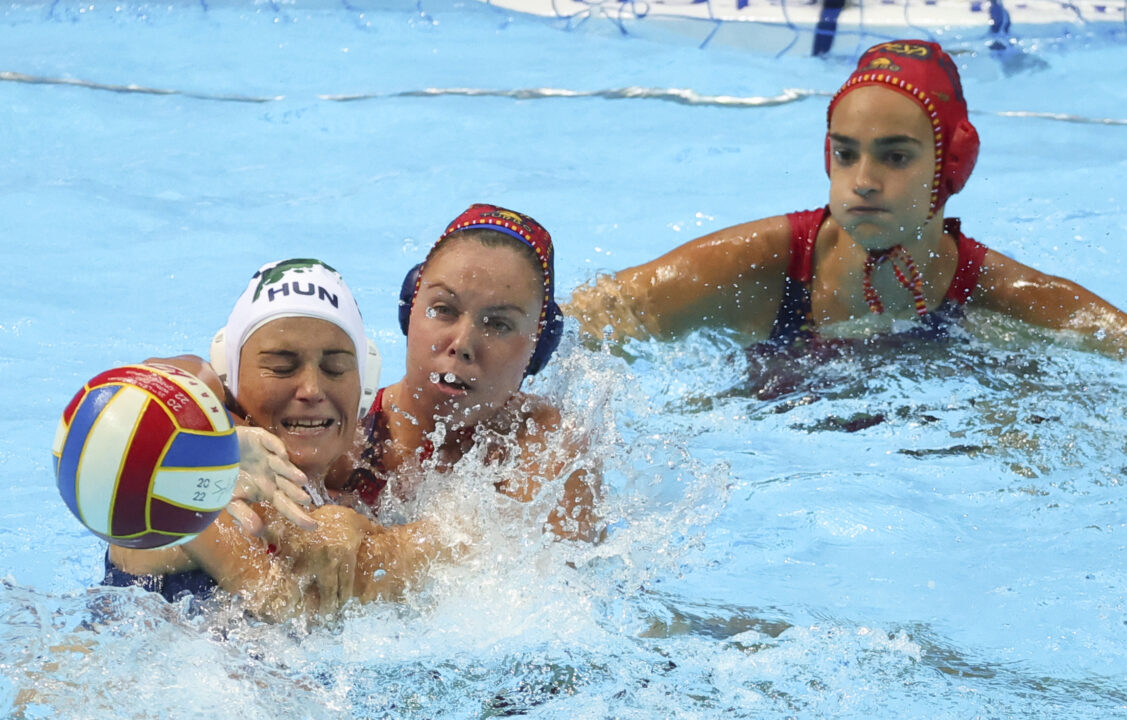 The Kap7 Champions Cup is a three-day event with competition in two divisions, girls and boys ages 14 years and younger, and in 8th Grade or under.

The Super Final gold-medal match was tied at 11-11 after full time and four of the first six goals were saved and 13 more crossed the line before the final shot was stopped on the line, needing a VAR decision to confirm Spain’s victory. The bronze-medal final was also 11-11 at the final whistle and outgoing champion United States of America won the shootout 5-4 over Netherlands for 16-15. In the lower classifications, Italy held off a resurgent Australia 13-11 for fifth place and Canada sent off New Zealand 13-6 for seventh ranking.

European champion Spain can now add the FINA World League title to its resumé after a stunning 20-shot penalty shootout victory over Hungary. It was a magnificent match, which was tied at every number to nine with 3-3 at the quarter, 6-6 at halftime and 9-9 at the final break. It was end-to-end action with Hungary taking the first lead and Spain leading at four, six, seven and 10, going to 11-9 before Hungary claimed the final two goals and the last just beating the buzzer and a VAR decision just to make sure, thus forcing the shootout. If you looked back at the match, you could pick out certain mistakes, like Spain’s failure to assist goalkeeper Martina Terre — the tournament’s best — by leaving her stranded with a defender, eventuating in a three on one at 6-6, one second from halftime. Then there was Paula Leiton who was caught in a clutch at 5:29 in the last quarter and the play was stopped for five minutes as VAR was used, firstly sending Leiton from the pool with a red card for fighting and then having it overturned. If that was not enough drama for the packed Spanish crowd, there was a double exclusion at 3:07, but Judith Forca gained a second consecutive goal soon after for 11-9. The crowd was in raptures. Then Dora Leimeter scored on extra-man attack for 11-10. Soon after, Hungary had a shot rebound and regained at 0:13 and Greta Gurisatti banged in a shot from wide left and VAR used to determine that it left the hand before the buzzer sounded. It did and the shootout eventuated. It was as excruciating for the players as it was for the spectators with Spain shooting first and having both stopped by the stoic Alda Magyari. Terre stopped the second and third Hungarian shots and then 13 went past the keepers before Gurisatti, the Hungarian heroine 15 minutes earlier, having her shot stopped millimetres from crossing, according to VAR. Spain had won its first crown and will forever have the trophy as the final World League victor before the World Cup overshadows it in coming years.

Match Heroes
So many, with Forca and Leiton netting four each for Spain, but it was probably the tournament’s most valuable player, Hungary’s Rita Keszthelyi, who emerged the finest in water with five goals. She was tireless all week and, while not scoring a lot of goals earlier on, stepped up when most needed. Her long career deserved a gold medal, but she should be satisfied with her efforts for silver.

Stats Don’t Lie
Both teams converted six extra-man goals with Spain doing it from 10 attempts and Hungary from 13.  The sole penalty goal went to Hungary.

Bottom Line
Spain has travelled an amazing journey under head coach Miki Oca, the 1996 Olympic champion, since he took over the reins and the team has achieved so much, especially this year after the disappointment of fifth place in the Budapest Worlds and then the European gold in Split. Now Spain adds a second World League medal, but this time it is gold, to go with the silver from 2016 and 10 Super Final appearances. Hungary goes home with eight showings and three silver medals and that amazing victory over USA the previous day.

UNITED STATES OF AMERICA 16 NETHERLANDS 15 in penalty shootout (FT: 11-11. Pens: 5-4)
For the second time in 18 appearances, USA collected a bronze medal, which means that in the history of this event, it only missed out on a medal once — fifth in 2005. By winning 14 titles and finishing second once, the USA leaves the competition as the most successful nation. Although it was not gold today, the team showed what it can do and swatted a game Netherlands in the shootout by a single goal. Such was the closeness of the match that it was tied seven times — one, two, three, seven, nine, 10 and 11. Netherlands opened, but then had to play catch-up to USA, trailing 6-3 and then 7-4 at halftime. The Dutch brought it to 7-7 in less than three minutes before Jordan Raney sent in a double for the 9-7 final-break advantage. Another three-goal surge by the women in orange not only gained a draw when Lola Moohuijzen converted extra-man attack, but also went to the lead thanks to Maartje Keuning. Moolhuijzen committed a cardinal sin earlier in the match when she was ejected and then inexplicably returned to the pool as an illegal player, earning a penalty foul that USA converted for 2-1. She made amends later with a penalty score of her own en route to 10 goals for the tournament while celebrating her 18th birthday. Raney and Bente Rogge traded goals and at 2:53, Rachel Fattal blasted in the 11-11 equaliser, which led to the shootout. Netherlands won the toss and the only shooter to have her shot saved was Marit van der Weijden, who had an excellent FINA debut at this venue otherwise.

Match Heroes
Raney scored six goals before today and sent in five more in the match that mattered and scored the final shot of the shootout rotation to win the match and take home the bronze medal. Goalkeeper Ashleigh Johnson made one crucial save for USA in the shootout, but made numerous others, including two consecutive snap saves earlier in the match, thwarting what should have been an easy Dutch score.

Stats Don’t Lie
USA converted five from nine on extra-man attack and the Dutch four from eight and there was a penalty goal apiece.

Bottom Line
USA has been the leading nation in the world for so long and the 14 World League crowns, one silver and two bronzes from 18 appearances is unprecedented in world sport. Netherlands leaves with a silver and a bronze from eight outings and the thought “If only…” It could have been the second team to defeat the normally invincible North Americans at this tournament.

FINA Power Ranking before the event

With a 9-4 lead two minutes from halftime, Italy was the deserved winner of this final encounter for the teams. It looked all over as Australia struggled to find decent shots and was blocked out by the Setterosa. The quarter time was 4-2 to Italy after being tied at one and two. Even though Australia slipped in the last goal of the first half, thanks to Matilda Kearns on extra, four seconds from the buzzer, Italy was the team of the day. Then an unusual thing happened. The Aussie Stingers repeated their antics of the previous day against Canada when it won the third period 5-1. Today  it was 6-2, which put a different complexion on the match. Starting from 9-4 in the previous quarter, the Stingers twice went three straight with the second stanza taking the match to an incredible 11-11 by the final hooter. It took two minutes for Dafne Bettini to score on counter and captain Chiara Tabani drive and take a cross pass on extra for the 13-11 Italian scoreline at 5:06. Nothing either side did could bring up another goal and Italy finished fifth.

Match Heroes
Domatilla Picozzi scored three goals with a pair in the opening quarter and a third to push the score to 10-7 in the third. Alice Williams tuned into the match with three goals for Australia and Bronte Halligan scored another pair for 14 in Tenerife.

Stats Don’t Lie
Italy scored four from nine on extra-man attack and Australia three from nine. Claudia Marletta converted two penalty fouls for Italy — 15 goals for the week —and Halligan one for Australia.

Bottom Line
Italy has the experience this year with World League, World and European Championships and this showed through. Australia played brilliantly in parts and needs to string more good periods together in the lead-up to Fukuoka 2022 next year. Italy bows out of the competition with four silvers and a bronze while Australia leaves with four silvers and six bronzes, second in total number to USA.

Canada gained a second win for the week and finished seventh. Its shootout win over Netherlands was heroic, but did not improve its position in the bottom four. Canada showed why it deserves to be in the top echelon of world reams, shrugging off the Kiwis at 4-4 in the first quarter, rising to 7-4 at halftime and 10-5 by the last break. The Kiwis were kept nearly scoreless in the middle quarters with the Maddie Quin goal at 1:44 the only relief. New Zealand levelled at one, three and four in an interesting first quarter that had eight goals and none was on extra-man attack. They were all field goals, including three centre-forward backhands. In fact, the first of the three extra-man goals came halfway through the second quarter. It was that kind of match where the players were enjoying themselves and playing freely. Congratulations to Canada, whose 18 appearances in the World League Super Finals alongside United States of America, is a record and reaped two silver medals — 2009 and 2017. For New Zealand it was a cameo performance with five matches in its first appearance and vital data received for following years.

Match Heroes
Kyra Christmas was the undoubted star with four goals, scoring in four different manners, including a penalty strike. She tallied 14 for the tournament. For the Kiwis, Emily Nicholson scored the first three goals for her team by quarter time, and 10 for the week, as it was well in the hunt.

Turning Point
The second, third and fourth quarter where Canada went from 4-4 to 13-5.

Stats Don’t Lie
In a match that gave few chances on extra-man attack, Canada did the best with two from six while New Zealand gained one from seven. Canada converted both penalty attempts.

Bottom Line
Canada was the superior team coming into the tournament and had that glorious shootout win under its belt. Canada has played more matches on the world stage that the Kiwis in recent years and that showed through.

FINA Power Ranking before the event