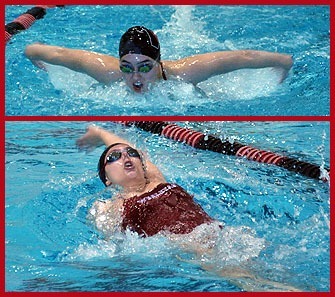 MIDDLETOWN, Conn. – echoes of Defend this Nest can be heard throughout the athletic center as Wesleyan University hosts the 2015...

MIDDLETOWN, Conn. – echoes of Defend this Nest can be heard throughout the athletic center as Wesleyan University hosts the 2015 Women’s New England Small College Athletic Conference Swimming & Diving Championships. The defending champions – no. 8 Williams – is hoping to take home their 14th overall NESCAC title. Last year, Williams hosted the rest of the ‘CAC in Williamstown and became the first team to win with over 2,000 points in NESCAC history – doing so with 2,007 points.

Here are the results at the end of night one:

Williams had a good start to the first night – taking the 200 free relay with a meet-record breaking time of 1:34.36. The relay consisted of freshman Emma Waddell on the lead, followed by Catherine Treesh, Faye Sultan, and Sarah Thompson.

No. 20 Amherst had a nearly unrivaled win in the 50 fly – by junior Sarah Conklin – who swam a time of :24.73 and took first place by over half a second. Conklin’s 50 fly also broke Wesleyan’s pool record.

Williams senior Sarah Thompson went into the A final of the 500 seeded third, but won by nearly a second – swimming a time of 4:56.40.

Second place after the first night would go not to Amherst or Middlebury, but to Bates – with Whitney Paine scoring high points by taking first the 50 back with a time of :26.13.

NESCAC freshman are having a good meet – dominating first place in the  200 IM, and 50 free.

To finish off the meet, Williams’ 400 medley relay – consisting of Olivia Jackson, Breanna Nguyen, Emma Waddell, and Sarah Thompson – took the gold in a meet-record breaking time of 3:44.22.

Check back at SwimSwam for more updates as the NESCAC 2015 Swimming & Diving Championships progresses.