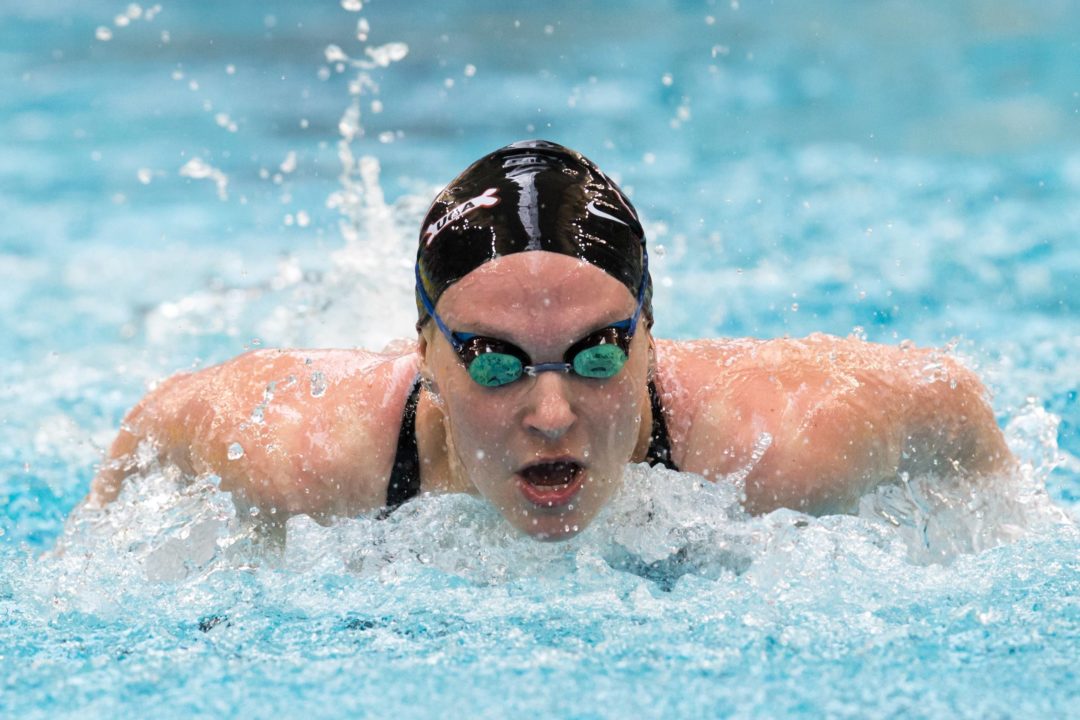 Georgia already has 11 point-scoring swims and dive slots tonight and has moved up 4 points from its seeds. Current photo via Tim Binning/TheSwimPictures.com

The first of 6 sessions has wrapped up at the women’s Division I NCAA Championships in Minneapolis, and already Georgia is showing why they’re considered the pre-meet favorites. The Bulldogs put 9 swimmers/divers/relays up (in the championship final) and 2 down (in the consolation final), a total of 11 point-scoring swims at night 1 finals.

Stanford had a good morning of its own, putting 5 swims up and 2 down. It’s fitting, then, that Georgia and Stanford will battle for the very first NCAA Championship to be given out tonight; those two teams are tied for the top seed in the 200 free relay.

Note: these ups/downs include diving, which completed its preliminaries just after the swimming session. Diving consols will happen this afternoon between sessions.

An interesting way of putting those numbers into context: We scored out the meet based on prelims results and compared that to the day 1 scores we came up with in scoring out the psych sheets. If nothing changed from prelims to finals, Georgia would be leading the meet by over 60 points heading into day 2. The Bulldogs had a good event lineup today (that 500 free was a bruising way to begin the meet), but they actually outperformed their seeds as a whole, setting up to score 4 more points than they were seeded to.

Stanford had an even better morning, moving up 11.5 points. The opposite is true for Cal, which dropped down 6.5 points from their seedings. A big part of that was the 400 medley relay, though, where the Golden Bears didn’t seem to swim their “A” squad this morning after coming in with the 2-seed. They should be able to make a lot, perhaps all, of those points up tonight by adding Rachel Bootsma and perhaps Liz Pelton to the relay. Also, Missy Franklin has a shot for a double-whammy: if she wins the 500 free, she’ll both steal points from Georgia and gain some for Cal.

The biggest movers and shakers of the morning were the hometown Minnesota Gophers, who moved up 25 points from seeds and will have a point-scoring swim in every event tonight. Georgia, Cal and USC are the other three teams with representation in each of the swimming events on night 1.

Note: in order to compare the psych sheets, which didn’t include diving, with the preliminaries, we didn’t score diving into this analysis.

Ready for some fast swimming! Looking forward to see what Georgia/Cal/Stanford will be bringing to the table on day 1. I will also be rooting for Emma Reaney and Ivy Martin who can surely bring some parity!! Woo!