Why The Peaks and Troughs Of The Swimming Stroke Cycle Matter 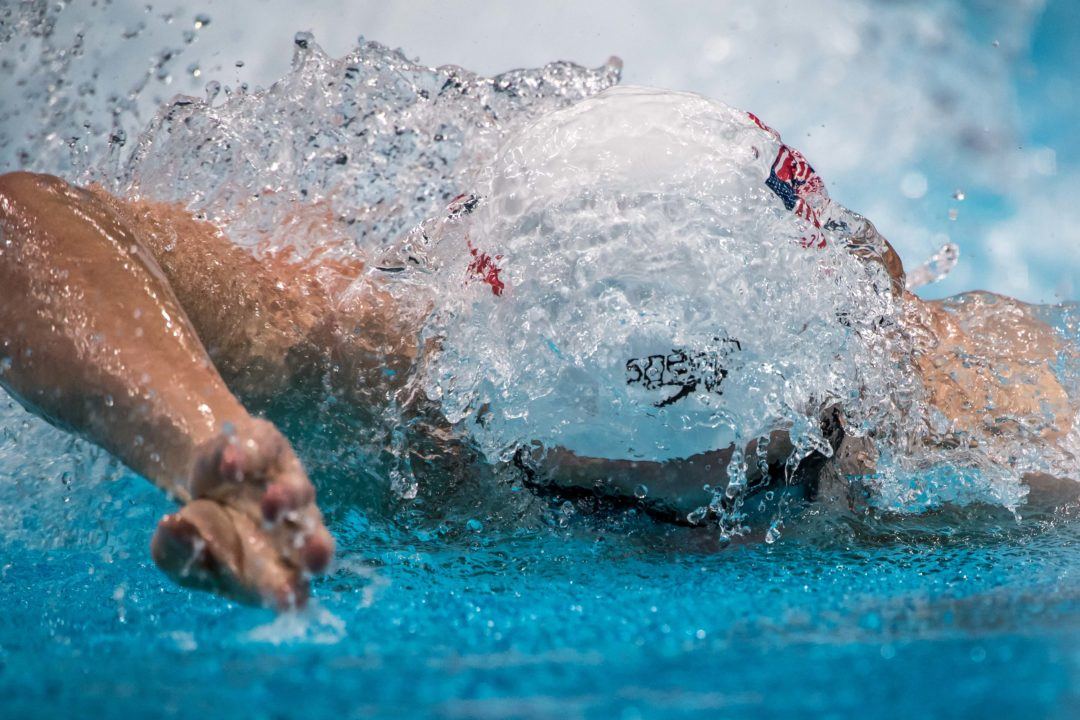 After performing many of studies on great and not-so-great swimmers, we have come to appreciate what the ‘desirable values’ are for the differences between peak and trough speeds in each swimming stroke cycle. Current photo via Mike Lewis/Ola Vista Photography

Once we understand how important it is to obey the law of inertia in the water, how do we really know if we are? Each of the four strokes demonstrates peaks and troughs of our body’s speed during the swimming stroke cycle. In freestyle and backstroke, there is a right arm peak and trough speed and a left arm peak and trough speed. Butterfly has a peak for the first down kick, which occurs while the hands are pulling underwater, and a peak for the second down kick, when the hands are recovering over the water. Between each peak is a trough. In breaststroke, there is a kick and pull peak and a trough that follows each.

At The Race Club, through the technology of the velocity meter, we measure a swimmer’s velocity, acceleration and deceleration at all times throughout each swimming stroke cycle. It enables us to identify and quantify all of the peak and trough speeds. When synchronized with video, it also enables us to identify stroke deficiencies, such as poor kicking or pulling motions or head and body position that magnify the differences between peak and trough speeds. The velocity meter enables us to make corrections in technique that we could never identify from the deck nor from an underwater window without also understanding the impact they have on body speed.

Looking at butterfly, we often see a difference range of 1 to 1.5 meters per second or more between the peak and trough speeds. In breaststroke, since we are starting from nearly a dead stop before beginning each kick and the kick provides the majority of propulsive forces, we want to see a big increase in speed, or a large difference between peak and trough after the kick.  Breaststroke is analogous to doing a standing dunk under the basketball net.

Certainly in freestyle and backstroke, minimizing the difference between peak and trough speeds conforms to the law of inertia and makes us more efficient swimmers. The question is how do we do that?

In both strokes, there are really only three things we can do to conform to inertia. First, sustain a steady six-beat kick. Second, increase the stroke rate, which lessens the ‘down time’ of our pulling propulsion. Third, reduce frontal drag in all aspects possible; better head and body position, proper elbow bend and arm position and a tighter kick.

For example, in a study of my freestyle pull (no kick involved), I found that in the three tenths of a second between the peak and trough velocities of each hand, the deep arm pull caused a 40% drop in body speed due to increased frontal drag versus a 25-30% drop in speed with the high elbow pull (less frontal drag). The amount of work required to overcome a 10% difference in body speed on each and every pull is overwhelming. The speed cannot be sustained for long with the deeper pulling motion.

For starts and turns, conforming to the law of inertia generally means not waiting too long to initiate the dolphin kicks off the wall or entry. Or it means keeping the kicks fast and tight and transitioning to flutter kick before the breakout….all designed to help sustain our speed.

In summary, don’t ignore Galileo’s discovery and Newton’s first law of motion. Inertia is vital to our success as swimmers. If we learn to conform to it, we might just win some races.

Have used the velocity meter before and found it to be a great teaching & correctional tool. Found in Breaststroke 3 peak cycles insweep/arms, the drive/compact shoot forward and the kick (afterburners). Do you have a recommendation of where to find a system & cost? Good to see some video on here as well ex. the depth of Fly stroke

Good observation. There are really only two major velocity and acceleration peaks in breaststroke, one from the pull and one from the kick (early in the motion backward). Because the kevlar string is attached around the hip, there are pseudo-peaks that occur when the upper body elevates and then presses forward. One just has to sort out what is real acceleration from that caused from the upper body motion.
We use AP Labs from Italy for our device and like the ability to measure peak acceleration and deceleration, as they are time sensitive with maximum propulsion and maximum drag forces and help enable us to identify what are causing or creating those.