Why RPM Matters in Swimming 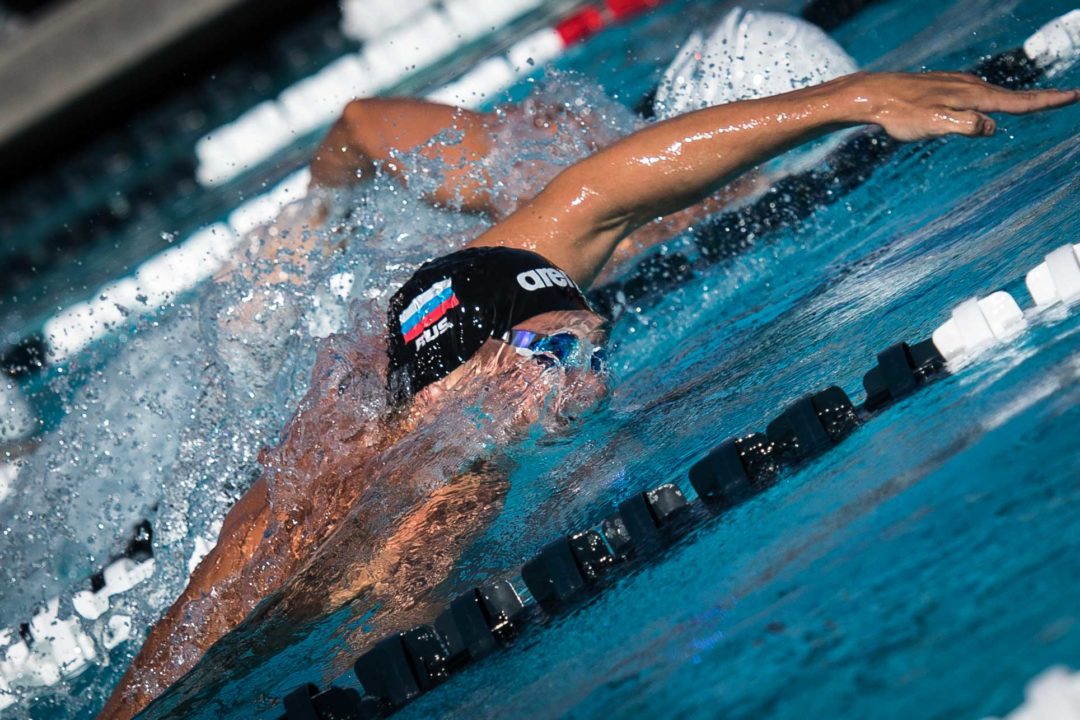 In the sprinters’ world, RPM matters. When a swimmer goes from hip-driven to shoulder-driven, he basically changes the technique of using his hand (and arm) from an airplane wing and paddle to using it as a propeller. Current photo via Mike Lewis/Ola Vista Photography

Virtually all of the elite sprinters use shoulder-driven freestyle technique. Shoulder-driven freestyle, as opposed to hip-driven or hybrid freestyle, requires that the swimmer gets the hand into the propulsion phase as soon as possible after entering the water. In other words, there is no delay of the hand out in front before it begins pushing backward. The result is a higher RPM or stroke rate.

In the sprinters’ world, RPM matters. When a swimmer goes from hip-driven to shoulder-driven, he basically changes the technique of using his hand (and arm) from an airplane wing and paddle to using it as a propeller.

The propulsion of a swimmer comes from both the hands and the feet. While all elite sprinters have very fast kicks, the total contribution of a sprinter’s overall speed from the kick and the pull remains controversial. Elite sprinters can pull 50 meters freestyle faster than they can kick it on the surface (by a few seconds), but from that one cannot necessarily conclude that the pull contributes more to the overall speed than the kick. While there is clearly more propulsion coming from the arm pull, there is also more frontal drag from this motion than with the kicking motion. Also, the measured pulling speed has the benefit of the coupling motions, while the kicking speed (with a board) does not.

Regardless, since the contributions of pull and kick to body speed are likely to be pretty close to equal in the sprints, the point is that the kick had better be fast. A few years ago, I trained a Race Club member that was trying to reach a goal time of 23.0 for the 50-meter freestyle. His best time had been 24.5. In six months, he improved his kick time from 50 seconds for 50 meters (1 m/sec) to 38 seconds (1.32 m/sec). His sprint time improved to 23.2 seconds…all due to a faster kick.

At The Race Club we have a saying that when it comes to the pulling motion, ‘frontal drag trumps power’. However, that is not so in the 50 meter sprint.

The deeper elbow pulling motion puts the arm in a biomechanically stronger position for propulsion, compared to the high elbow pull. It also causes more frontal drag from the forward motion of the upper arm. In any event longer than 50 meters, the additional frontal drag caused by the deeper elbow will wear the swimmer down. In the sprint for a short duration, it is more manageable. The pulling motion of the elite sprinters ranges from nearly a straight arm down (Anthony Ervin) to an elbow that is about half way from the surface to the straight down pull (Manaudou, Adrian). Either is a compromise in position from the lower drag, high elbow pulling motion of the elite distance swimmers.

The fourth common feature of all elite sprinters is the effective use of coupling motions; body rotation and arm recovery. Perhaps the least understood and appreciated of all four qualities, these coupling motions are an important way to augment propulsion and swim faster. Both motions are circular. The amount of kinetic energy that is generated from each of these motions is determined by the mass (of upper body or arm), the square of the radius (width of the body and length of the arm) and the square of the angular velocity of each (the rotating body or recovering arm speed). The more kinetic energy in those motions that is coupled with the kick or pull, the greater the propulsion that is created.

Since there is more mass in the upper body than the arm, this motion is likely the more important of the two motions. We cannot change our upper body mass nor our body’s radius, but we can change the rotational speed of our body. By doing so, we can have a huge impact on our propulsion due to the exponential relationship of angular velocity.

Through the power of coupling motions, we see nearly all of the elite sprinters increase speed by rotating the shoulders quickly from one side to the other and by recovering their arms quickly with them either straight or nearly straight. Those two motions require a lot of work, but significantly increase the propulsion of both the pull and kick.

Sprinting fast requires that you have certain anatomical and physiological tools, as well as good technique. In the next and final article, we will describe ways in which your training can help you develop better tools for sprinting.

Such a legend. I’m constantly analysing sprinters in this way and it’s great to see great minds out there doing the same.

I’d like to understand if this sprint stroke should be taught from the time kids are young, or modified as they get older and it becomes more clear they are a sprinter. Is this sprint stroke with straight arms hard on the shoulders?

Also, didn’t Janet Evans swim with a straight arm freestyle, yet she was a distance swimmer?

Most of the torque on the shoulder is occurring during the underwater pull, not the recovery. That is not to say that some shoulders may have impingement during the recovery, but if the body rotates well, then I believe that it ‘unlocks’ the shoulder joint for a much easier straight arm recovery.
Janet Evans did swim straight arm at 100 stroke rate for the entire 1500 meters..which is a great testimony to her work ethic and fitness. Lotte Friis (Denmark) swims distance today with one straight arm and one bent arm, so there are some that use the technique for more than sprinting.
We believe that a swimmer can learn to use straight arm recovery at any age… Read more »