What Happened When Beijing Had Morning Prelims in 2008?

On Friday, SwimSwam editor-in-chief Braden Keith published an editorial arguing that there are some pro-athlete facets to the decision to... Current photo via olympic.org

On Friday, SwimSwam editor-in-chief Braden Keith published an editorial arguing that there are some pro-athlete facets to the decision to hold finals at the 2020 Tokyo Olympics in the morning.

One of his points was that there wasn’t clear evidence that morning finals sessions will lead to slower times. So I set out to gather some data on this topic from the most-relevant sample we have on the flip: the Beijing 2008 Olympics.

The last time the Olympics were held in Asia,  the organizers set up the schedule in the same order as they will in 2020. Prelims were during the night session and semis/finals were in the morning.

At the 2000, 2004, and 2012 Olympics the schedule was a more traditional prelims in the morning, finals at night set up. 2016 was a bit of an outlier with prelims in the early afternoon and finals starting at around 10PM and wrapping at midnight.

We can get some idea of the impact of the altered schedule by comparing the 2008 Olympics to the Olympics with a more standard schedule. I compared the time change from prelims to semis, semis to finals and prelims to finals (for events without semis) for the same swimmers, individual events only. For example, in the prelims vs semi comparison, a single data point was Gary Hall Jr. in 2004 50 free prelims 22.04, semis 22.18, a time add of .6%.

Prelim vs Final Average Time Change  (for events without semifinals)

In the years with a standard morning prelims/evening finals schedule, swimmers were noticeably faster in semis than in prelims. In 2008, with the evening prelims/morning finals schedule, on average women were slower in semis than in prelims and slower in finals than prelims in distance events. The men were slower in the finals of distance events and faster than prelims in semis but by a smaller amount than in the standard schedule years (-.1% vs -.3%).

Swimmers were a bit better in 2008 than normal years comparing their finals times to their semis times, but not by the margin they were worse in the previous round.

There does seem to be an effect where semis and finals times are slower relative to prelims times in 2008. But is the different schedule the cause?

This data is from 2008, so the obvious first question is “What about the super suits?” The comparison is of swimmers times to themselves in previous rounds. I assume for the most part swimmers were wearing the same suit from one round to the next, so it doesn’t seem like the suits should be a big factor. If someone can present a compelling argument in the comments why super suits would change the way swimmers attack a prelims/semi/finals format meet, I’m all ears.

Another complaint I anticipate: the use of averages instead of medians. Medians are often better because of the skew that can be caused by outliers or asymmetric distributions. That doesn’t seem to be a problem here. The distributions are pretty symmetric and relatively outlier free. The shifts above are present in the medians as well. Here are the distributions for the prelims vs semi data that show the shift in the overall distribution of time changes. 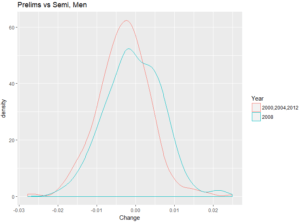 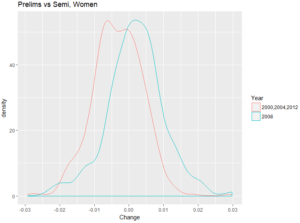 Is the schedule shift the cause of the worse performance relative to prelims in 2008? Maybe. The suits could be to blame. Some other environmental factor could be the cause. The schedule does seem like a likely culprit. Swimmers aren’t used to finals in the morning.

Alternatively, this isn’t evidence that 2008 finals were actually slower than they would have been in neutral conditions. Perhaps swimmers went abnormally hard in prelims in 2008. Records were falling so fast in the super-suits and times dropped so quickly overall, that maybe it became harder to control energy in early rounds.

Personally, I think the most likely explanation for the shift in the data is that the morning finals/semis is a disadvantage. It’s the simplest explanation.

Interesting but you also need to determine whether these differences are statistically significant or just down to random variation.

Thank you. That makes a more complete argument.

So we should expect slightly slower final times overall but it is the same for everyone so fair. There are likely to be some individuals better suited to early starts but as professionals they all have time to prepare for this.

The Rio schedule was even worse in my opinion. In that situation the time of finals was extreme. Who wants to swim that late? I would imagine it had a bigger effect on recovery than morning finals does. So potentially disadvantages multi eventers like Chad le Clos.