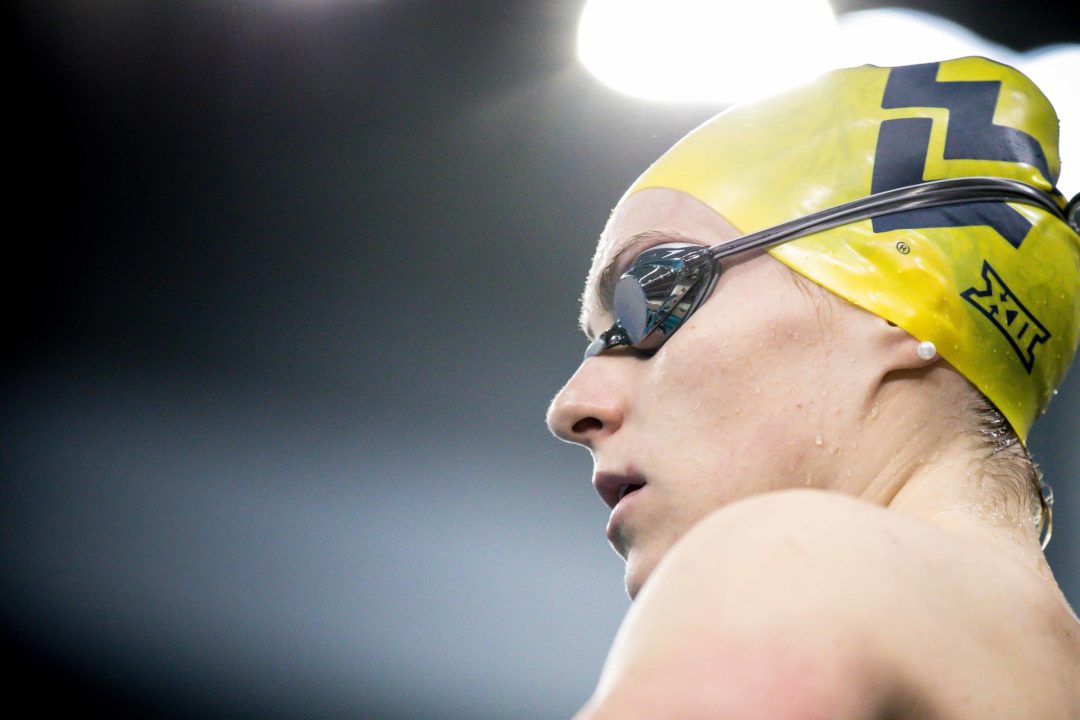 Honorable mention All-American Morgan Bullock won 3 individual races for West Virginia in their win over Iowa State. She got the ball rolling in the 200 fly, winning by 2 seconds in 2:03.41. She went on to sweep the butterflies, building her lead over freshman teammate Emily Haimes on the back half for a 565.47 to 56.85 victory. Her final win came in the 200 IM, where she led from start to finish in 2:05.77.

Iowa State also got a couple of freshman wins from Nolwenn Nunes and Elizabeth Richardson. In the 1000 free, Nunes was almost 10 seconds ahead of the field with her 10:26.78. Richardson used her front-half speed to set the pace early on, swimming to a 2:04.12 victory in the 200 back.

The Mountaineers topped the Cyclones by a score of 167-133 and collected 14 of 16 event victories, including both relay races. Senior Morgan Bullock paced WVU with four total victories, including three solo wins. Freshman Emily Haimes also picked up multiple solo victories, while freshman Holly Darling earned a sweep of events in the diving well.

“It’s always good to get a conference win,” WVU coach Vic Riggs said. “We knew it was going to be a really big challenge, especially coming off our meet last weekend. This is the first of three meets in seven days for us, so this was important. We talked a lot about preparing ourselves correctly and getting ourselves ready, and their energy was great today. We had a lot of kids step up to get a couple points here and there that were really pivotal in helping us win. The divers again did a phenomenal job on the boards, and it was just really nice to get a win.”

Saturday’s meet began with some excitement in the 200-yard medley relay, as the team of junior Ally VanNetta, freshman Mathilde Kaelbel, Bullock and senior Julia Nilton pulled away with a come-from-behind win. A 50 freestyle split of 22.77 from Nilton helped the team move in front of Iowa State, touching the wall in 1:44.69

West Virginia collected another pair of wins just before the first break of the day, as Bullock took first place in the 200 butterfly in 2:03.41 and Haimes captured the top spot in the 50 free (23.45).

In the diving well, Darling again paced the West Virginia divers, collecting victories on 1- and 3-meter springboards. Darling tallied NCAA Zones-qualifying scores on both boards to take the victories, earning marks of 297.90 on 3-meter and 276.23 on 1-meter.

Sophomore Camille Burt grabbed second place on 1- and 3-meter against the Cyclones, tallying a score of 287.55 on 3-meter and 273.23 on 1-meter. Burt’s totals also were NCAA Zones-qualifying scores.

“Today was a great demonstration of team and pride on both the swimming and diving sides,” diving coach Michael Grapner said. “I think the divers could hear the energy in the crowd and on the swimming side, so it helped propel them on the boards. I’m hopeful that this win today can help motivate us and set the standard for the divers as we move into the last two meets of the season, the Big 12 Championship and the NCAA Zone Diving Championships.”

Next, Gursoy finished in second place in the 500 free with a time of 5:03.81, followed by another victory for Bullock in the 100 fly (55.47). Bullock secured her fourth and final win of the afternoon in the 200 individual medley. The senior touched the pad in 2:05.77 to add another victory to the Mountaineers’ win column.

The day concluded the same way it started, with a come-from-behind win for WVU in the 400 free relay. The team of Nilton, Gursoy, Bliss and Haimes was just behind Iowa State’s team until Haimes hit the water to put the Mountaineers in the lead. The team combined to finish in 3:30.55 to secure the victory.

Coming up next, the Mountaineers are set to compete in a pair of dual meets to complete the regular season. On Thursday, Jan. 30, Villanova comes to town for a mid-week dual, beginning at 2 p.m. ET, at the Aquatic Center at Mylan Park. On Saturday, Feb. 1, WVU closes the regular season against George Washington, with action at the Aquatic Center set to begin at 11 a.m. ET. West Virginia also will honor its 15 senior members before the start of the meet against George Washington.

AMES, Iowa – The Iowa State swimming and diving team (3-4, 0-1 Big 12) dropped their first conference matchup to West Virginia (2-2, 2-0 Big 12) 167-133. The Cyclones took the title in four races, while second and third-place finishes proved to be crucial in keeping the fight.

Nolwenn Nunes brought Iowa State back to business in the Cyclone’s first dual since Dec. 13. The freshman from Quimper, France touched first in the 1000 free in 10:26.78, 12.44 seconds faster than the Mountaineer runner-up finisher.

Prior to three-meter diving, the Mountaineers held the Cyclones to a three-point lead, 67-64.

Freshman Elizabeth Richardson out-touched opponents in the 200 back with her finish of 2:04.12. Nunes (5:03.03) had a strong finish in the 500 free to bring the Cyclone event win total to four.

Both the 200 medley and 400 free relay just got beat out to take second. The 200 medley team of Emily Haan, Haas, Wyli Erlechman and Sophia Goushchina (1:45.05) touched .36 after West Virginia. The 400 free team of Andersen, Haas, Goushchina and Emma Ruehle missed the title by just .64 seconds.

“We learned a lot about ourselves,” said head coach Duane Sorenson. “This was the first time swimming in this pool and when we come back in about a month for Big 12s, hopefully we’ll be dialed in.”

Iowa State returns home for the second double dual of the season. The meet will be split into two days, beginning on Jan. 31 at 5 p.m. and continuing Feb. 1 at 10 a.m.