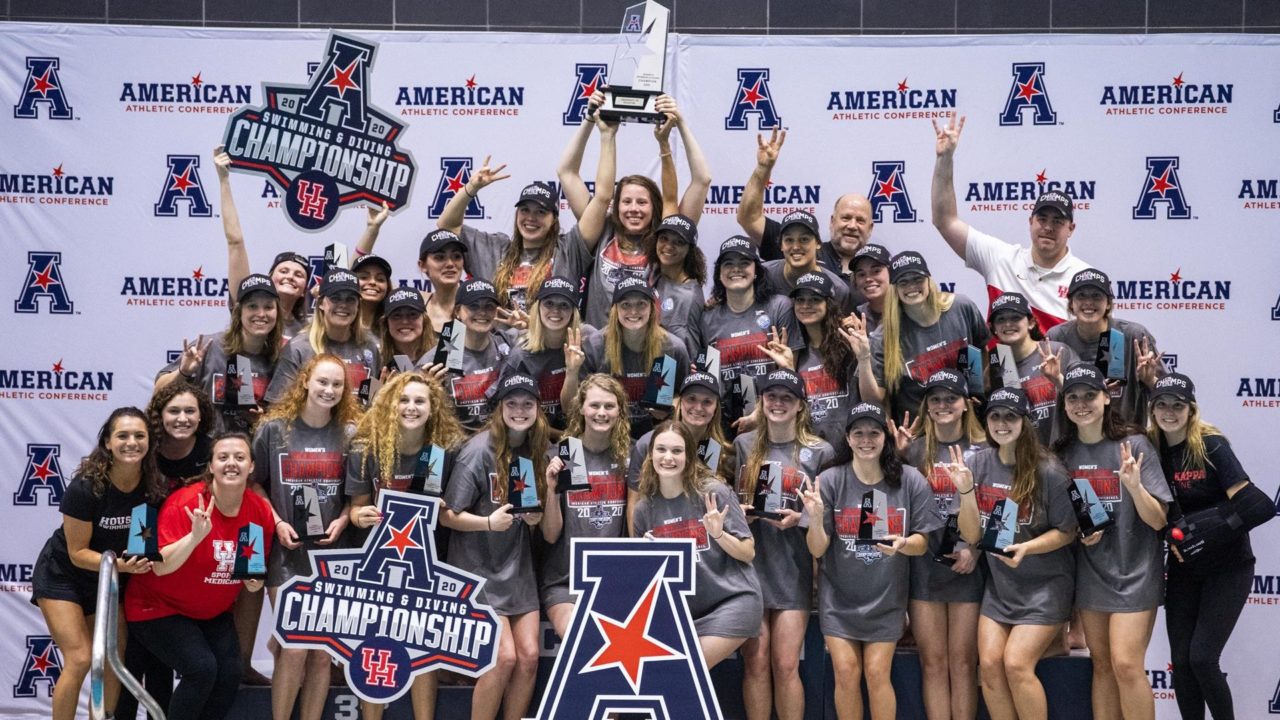 Snow and freezing weather in Texas has led the Division I AAC to postpone the start of their 2021 Swimming & Diving Championships. Houston won last year's women's title. Archive photo via AAC

The American Athletic Conference has postponed its 2021 Swimming & Diving Championship meet, but not because of coronavirus.

Instead, it is the threat of impending weather in North Texas that has delayed the start of the meet until February 21-23 at SMU’s Robson & Lindley Aquatics Center in Dallas.

Instead, the meet will now run from Sunday through Tuesday.

The state of Texas is expected to see snow and freezing temperatures throughout this week, which makes traveling to-and-from Dallas challenging for visiting teams. What’s more, states like Texas that don’t often face this kind of weather aren’t equipped to clear roads and make them safe to travel as more northern states are.

The weather system will see temperatures as low as 3 degrees this week. The same system is expected to leave as many as 7 inches of snow in parts of Houston, which rarely sees any snow, where the defending women’s conference champions from the University of Houston will have to make the drive north.

Temperatures will be back above freezing by Friday and climb back into the 50s and 60s as the meet progresses.

The University of Houston women and the East Carolina men are the defending AAC Conference Champions. Only 4 women’s teams will compete this season after UConn returned to the Big East and East Carolina cut its program (though that team will return as early as next year). Behind Houston, based on finish order at last year’s meet, are SMU (2nd), Cincinnati (3rd), and Tulane (5th).

On the men’s side, the meet will be essentially a dual between SMU and Cincinnati: the only remaining teams in the conference that sponsor men’s swimming & diving. Cincinnati was the higher-placing of the two programs at last year’s championship meet, though the absence of East Carolina and UConn will shift the dynamic of this year’s event.

Quite a small meet. Going forward, will the conference continue to sponsor men’s swimming and diving? The Big 12 seems like a good competitive fit if Cincy and SMU are soon left without a conference for their men’s teams. Just a thought…