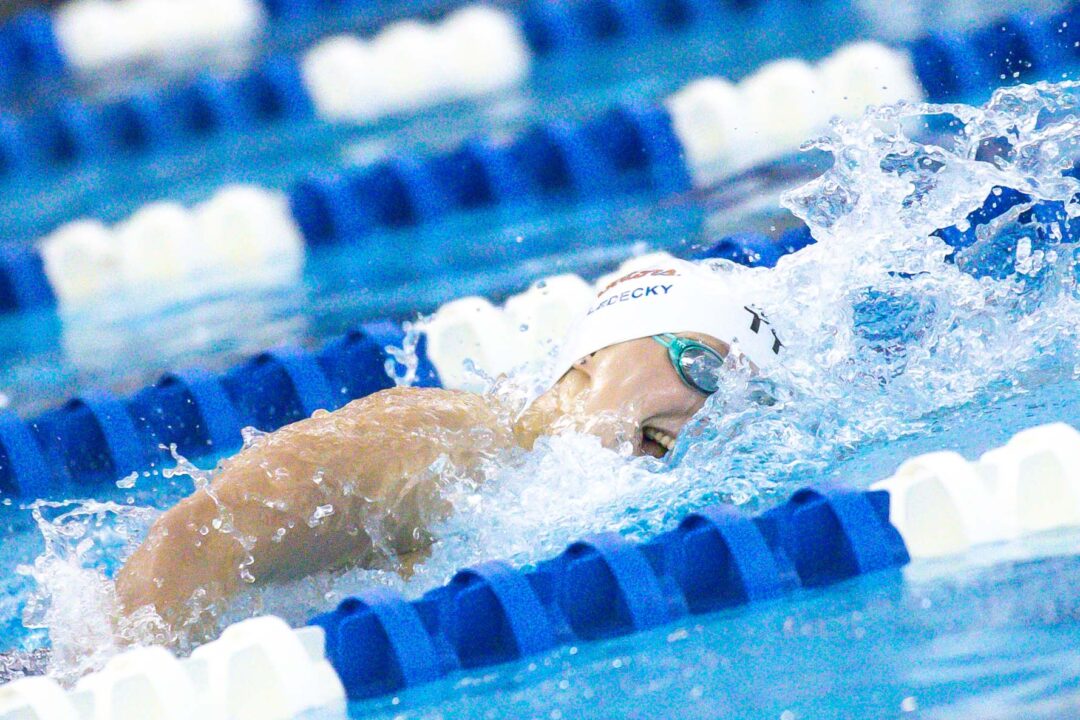 Katie Ledecky won her second event of the 2021 US Open on Thursday night, breaking the meet record in the women's 400 freestyle in a time of 4:00.51. Current photo via Jack Spitser/Spitser Photography

Katie Ledecky won her second event of the 2021 US Open on Thursday night, breaking the meet record in the women’s 400 freestyle in a time of 4:00.51.

Check out all six race videos from Day 2 finals below:

Ledecky finished ten seconds ahead of second-place Erin Gemmell, who finished in 4:10.12. Gemmell is just 16 years old. Sierra Schmidt and Katrina Bellio took third and fourth, respectively, with Schmidt finishing in 4:12.53 and Bellio just .20 behind her at 4:12.73.

Schmidt also made the podium in the 800, finishing third in that event.

Trey Freeman, who was top seed going into the event, and Hoe Yean Khiew, the Malaysian champion in the 400 free, both led the event neck-and-neck at the halfway point. But it was Freeman who took the win, swimming 3:49.06 to best Khiew’s 3:50.52.

Bobby Finke is known for his closing speed, but it wasn’t enough to get him to catch up. His 27-second last 50 allowed him to pass Charlie Clark to take third at 3:51.44.

Leah Smith went out with a 28.23 butterfly leg, and after losing her edge to Summer Smith in the backstroke, she quickly regained it in the breaststroke, splitting 39.14.

Leah Smith finished in 2:11.67, winning gold and improving on her personal best of 2:12.92, set at the prelims. That time would’ve won her seventh at the Tokyo Olympics.

18-year-old Baylor Nelson led by a body length by the end of the backstroke, ultimately finishing first at 1:59.86, becoming only the tenth person in the 17/18 age group to ever finish sub-2:00.

Mallory Comerford finished first in 25.24 — her fastest 50 free since June 2019. Arina Openysheva finished second in 25.33, and Camille Spink finished third in 25.36. All three finished faster than Comerford’s prelims top time of 25.37. Seven of the eight championship finalists were under 26, with NCAP’s Tatum Wall finishing eighth at 26.05.