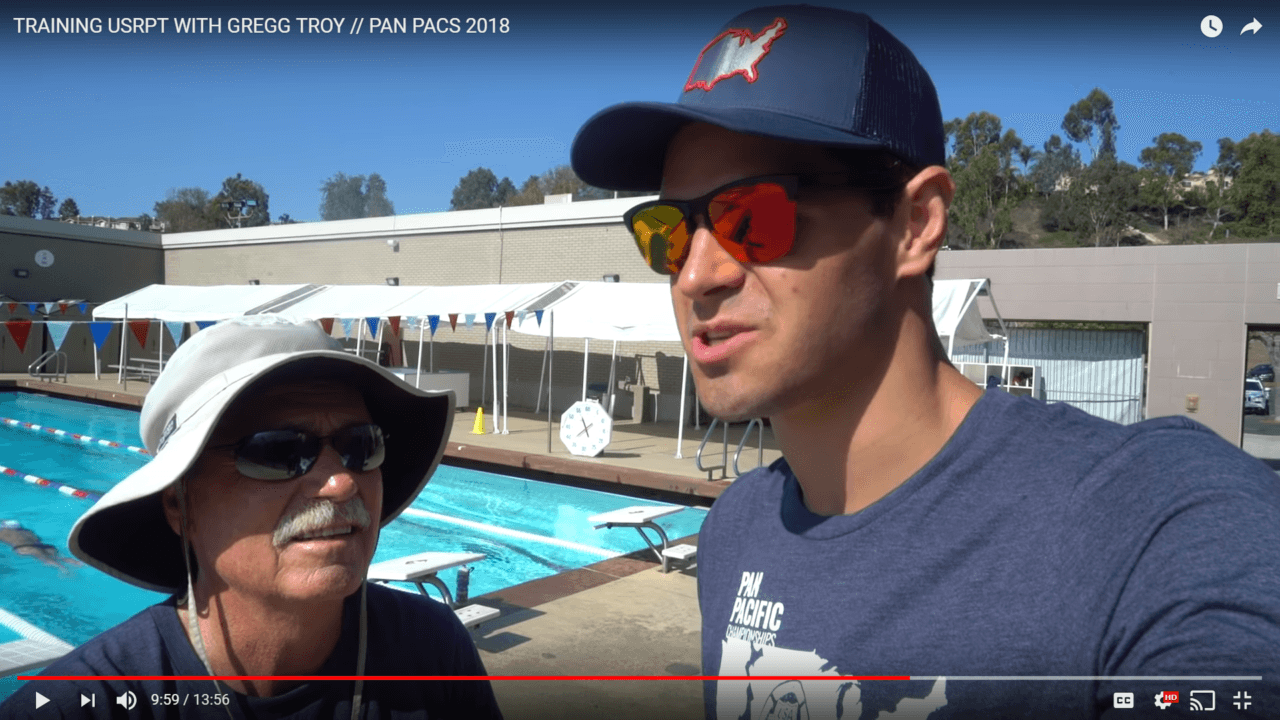 After teasing it in his last video, Michael Andrew runs his fans through a workout with members of the team USA coaching staff, which doesn’t include his dad, Peter Andrew. Because Andrew’s training style is so drastically different than most of the team, this has been a big question for fans (and, those who are not so much fans) as it looked more-and-more likely this summer that Andrew would make the team.

He’s been on several junior travel teams before, where his dad wasn’t on the coaching staff, but now on the senior team, the question has come into focus.

To start the interview, Andrew talks with University of Texas men’s assistant Wyatt Collins and Indiana (and Pan Pac men’s team) head coach Ray Looze. Collins described it as a learning curve for him, but said that he was eager about the opportunity to pick up a new training style. Looze related and emphasized a point that MA made in his last video, that drew some sneers from the commenters, about how to time him. Specifically – because of the precision required by pure USRPT training, the coaches had to make sure they were timing Michael the same way that his dad did, which means starting the watch not on ‘go,’ but on when the feet leave the wall.

Looze and Chase Kreitler were the recipients of the USRPT tutorial from Peter Andrew, and were responsible for disseminating that to the rest of the staff.

The next morning, Andrew trained with Florida post-grad coach Gregg Troy. Troy, who has a reputation for grueling high-yardage set, says that he’s been doing USRPT for years (since the 70s), just not as often as Michael does it. He refers to it as “part of the mosaic,” which has been a theme painted by many of America’s veteran coaches, using different metaphors (including “tools in the toolbox.”)

Troy said what he likes about USRPT is that it’s repetition ‘correctly,’ and said that he finds value in repetition either with the correct speed (as in USRPT) or form.

Andrew finishes the video with a thank you to the coaches and a cameo from his Tokyo roommate Zane Grothe (who is a vlogging veteran since he’s in a post-grad training group with vlogger extraordinaire Cody Miller).

“different ways to skin a cat….” coach Troy uses a spoon mostly but occasionally a knife too! 🙂

It blows my mind how so many people don’t know what USRPT is. Race pace training is not USRPT. I have met so few coaches who understand USRPT. One of the big keys to USRPT is going to failure. That’s something that people often forget when they’re talking about it. Swimming 20×25 at your race pace is not USRPT. Failing is an essential part of it.

You mean it’s both race pace and failure, both are required for USRPT, no?

You can argue that MA set his goal time too high (I won’t second-guess him) but setting too low a goal time may result in missing too many swims.

We are 12 hours before Pan Pacs starts ……lets get ready !!! Great video by Michael