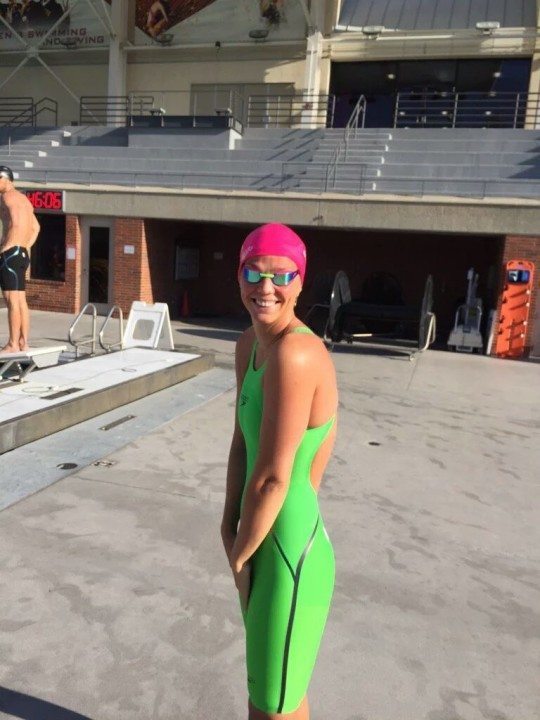 There are ‘Fast Fridays’ and then there are Trojan Swim Club Fast Fridays, as evidenced by the series of swift times thrown down by the USC-based professional swimming squad yesterday, February 12th.

According to Bermudian swimmer Julian Fletcher, the group has been training hard the past month and “[Head Coach Dave] Salo wanted us to suit up, just to see how fast we could go early in-season.” The set-up included touchpads and mock time trials after a warm-up period.

Says Fletcher, “Salo always has us working on our sprint speed and race mentality, and this was a merely a chance for us to practice racing.”

Among the head-turning unofficial swims clocked via the timing system was World Champion Yuliya Efimova‘s 100m breaststroke. Racing essentially on her own, the 23-year-old Russian blasted a time of 1:06.22, a mark which stands as the fastest in the world thus far in 2016. Efimova also clocked a 31.34 50m breaststroke in the Friday practice.

Watch below to see the suited up Efimova scorch the pool in the 100m breast exhibition race:

Other eye-popping exhibition times at the same practice included:

Your comments are abhorrent and disrespectful to clean athletes and programs.

do elbow injuries take that long to heal?
Kosuke hagino had an elbow injury before Kazan and is slowly coming back.

Also watch out for Georgina bohl in the 100 breast. Katie meili too

It depends on the injury. The big problem with any injury to a joint is that you can lose range of motion, which can take a long time to come back, or possibly never return exactly the same. Physical therapy can help speed up the process. I broke my elbow in the summer of 2011, and it wasn’t until 2014 or so that I really felt that I could lock the joint the same way as before (it still pops when I do so).

If Meilutyte is not at her best in Rio, then it will be a Meili/Efimova battle for the gold in my opinion. With a slight advantage to the Russian who has a better finish and who will not have to taper 1 month earlier to qualify.

unhappily for her, Meilutyte has a problem with one elbow, broken last year just after Kazan and had problem to extend her arme. It will be difficult for her

Can’t extend her arm…that doesn’t sound good. Where did you hear that? I thought it was going to be a takes time to heal type of thing and I was worried about her not getting enough training in before Rio. I really hope she will be ok. Ruta Meilutyte is my favorite female swimmer of all time. I absolutely love her. It is way too early for her career to be over .

Unless there’s another violation she is a lock for Rio.

I’m not so sure that she’s a lock. I think this event is really wide open this summer.

for the gold? not at all. for a medal? i think as well.

I’m saying to make it to Rio. I tried to respond to Tom from Chicago, but it didn’t work on my phone and created a new thread instead. I completely agree the 100m Breastroke is wide open on the women’s side this year.

Can anyone spot how many tested positive for banned substances in that list of swimmers?