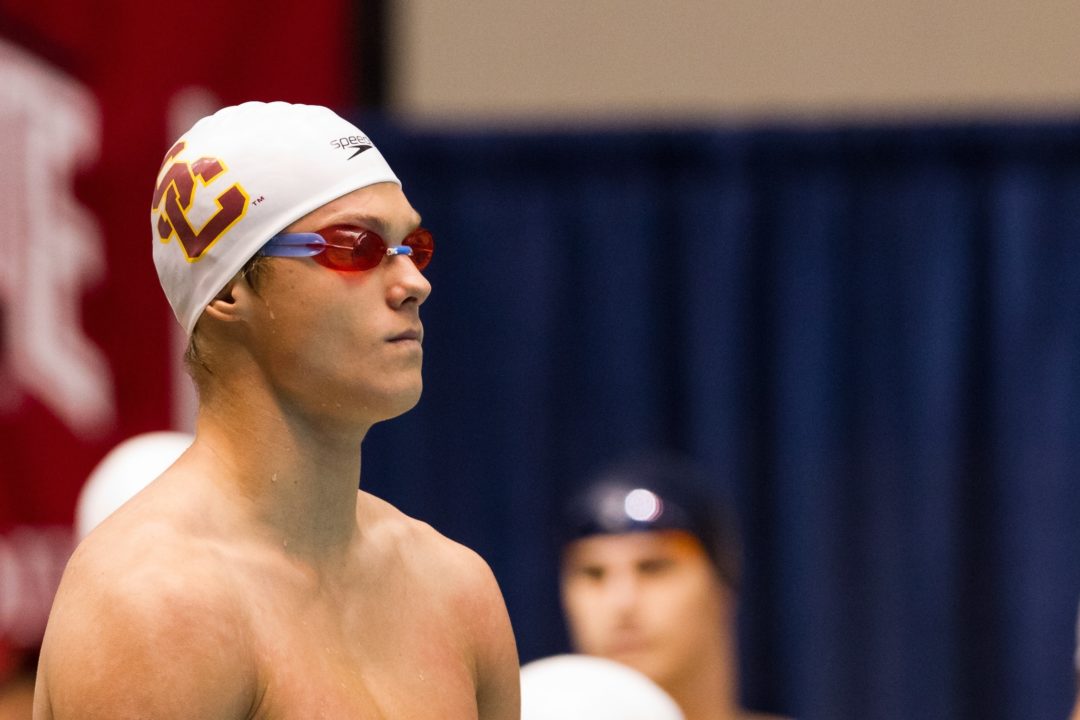 Morozov won both the 50 and 100 Freestyle at the 2012 Short Course World Championships and he's the favorite to win those same titles this spring at NCAAs. (Swim Photo Credit © Tim Binning, TheSwimPictures.com)

Vlad Morozov was already an Olympic Bronze Medalist (4×100 Free Relay) before he won two titles at the SC World Championships in December, but his performances in Turkey were huge milestones in his international swimming career. Since then he’s returned to USC and had some fabulous swims for the Trojans, posting the top times of the year in the 50 and 100 freestyle as well as some top times in the 100 back and breast.

In this interview with Garrett McCaffrey, Vlad discusses what’s going so well for him, possible events at PAC 12s and NCAAs, and the tough stretch he has in March and April where NCAA Championships and Russian World Championship Trials are just three weeks apart. He goes into details about which meet he will shave for and whether or not he’ll use his last year of collegiate eligibility.

Vlad moved to the states during high school and was a member of the Russian National Team prior to moving to the states, according to several websites. According to a previous interview, his club coach turned him into a sprinter – his club coach swam for USC. According to the video above, his stroke was suffering the past couple of years so he looked to Russia to fine tune his stroke, but he preferred Salo’s workouts. Did he really want to swim for the US or was it the politically correct statement to make? Personally, I think it’s a honor to be an Olympian no matter what nation an athlete competes for.

Why shouldn’t he represent Russia? Russia trained him initially. He came to the US and landed in the hands of USC alumni and then received a scholarship to USC. Now he’s training with both. Coincidence or a well thought out plan by Russia? Why on earth would he want to represent the US when Russia is taking such good care of him. There seems to be so many horror stories with the US elite athletes who had promising futures. The US has already served its purpose – elite level swimming and a quarter of a million dollar education.

I don’t know if your familiar with the situation, but Vlad initially said he wanted to represent the United States. and yes, it was a coincidence because he only moved to the United States after his mother married an American. I don’t think the Russian federation had any involvement in his move to America. they weren’t even in contact with him until recently.

And how long did that marriage last?

ask the many swimmers who end up switching citizenship because its an honor to represent the U.S. and they are thankful for the many opportunities they have been given. Im guessing he doesnt plan on moving back to russia to live the remainder of his life. Of course, the choice is his. But there is a reason he really wanted to swim for the US initially. And hes been here since he was at least 14. Its not like he just moved here to train.

One comes to mind on the promising futures, care to elaborate? He spent his age group life in Russia, but has done most/all? his sprint training on US soil.

He moved here before HS, went on swtv and stated he wanted to swim for the us. He was going to until it became to late to change sporting nation for London. Russia knows now they have a thoroughbred in Vlad and want to keep him, I’m not surprised if he’s being treated well. Imagine though if he continues this rise: Vlad, Adrian, even Jones, an up comer and/or Feigen? Only assuming Irvin is retired again by 2016.

Yeah, Vlad has made it clear he’s going to represent Russia for the foreseeable future.

I hope you finish College, Vlad. I would love to see you represent the USA, lots of opportunities now.

love to? He is pretty sure he will defend Russia..

Wait socalgirl89 are you missy franklin?

I think the ship has sailed on Vlad swimming for the US.