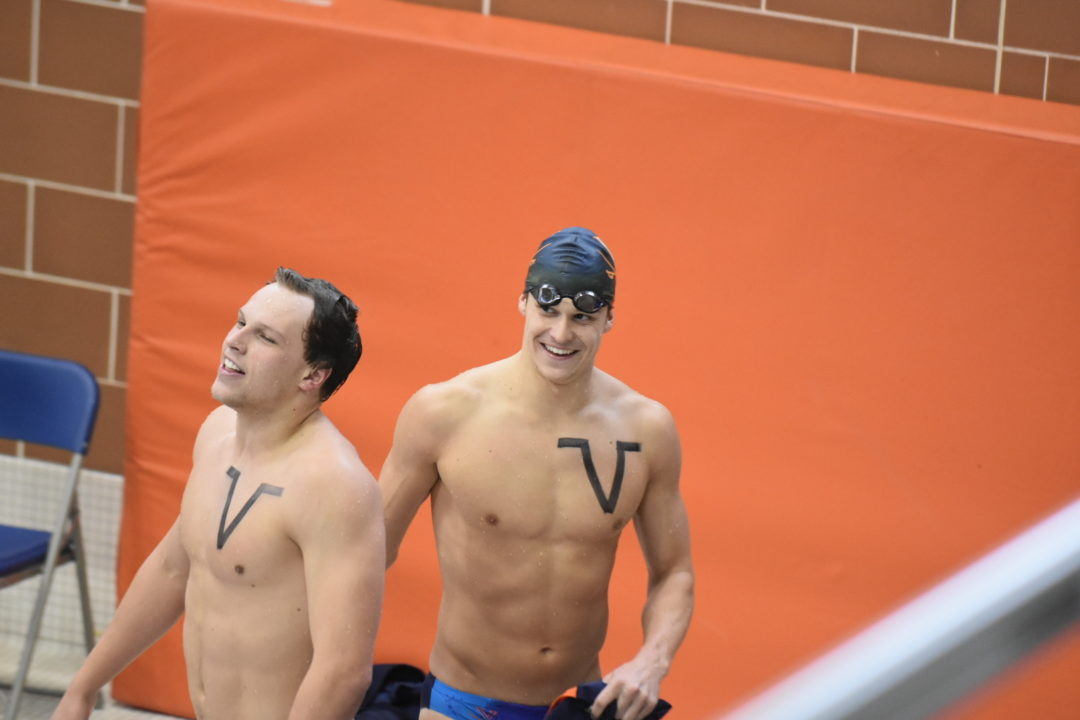 Virginia's Justin Grender (right) was the standout swim of the time trial session on Wednesday at the ACC Men's Swimming Championships. Archive photo via Julie Grender

A handful of time trial swims closed the first day of the 2020 Men’s ACC Swimming Championships in Greensboro, the most significant of which came from Virginia sophomore Justin Grender in the 200 back.

Grender swam a 1:40.71, which is 6-tenths faster than what was invited to the 2019 NCAA Championship time. That time knocks 2 seconds off his previous lifetime best that was done at last year’s ACC Championship meet where he finished 10th overall. His previous season best of 1:42.79 was done mid-season at the Tennessee Invitational.

That improvement would put him into the A-final later this week if repeated in the individual event. His time is half-a-second short of Robby Giller’s school record of 1:40.21 set in 2018.

Florida State’s Max Polianski was the only other swimmer with a time trial result that is a possible NCAA invite time. He swam a 1:42.35 in the 200 yard fly. That’s about a quarter-of-a-second slower than his best time of 1:42.09 that he swam twice at last year’s ACC Championship meet, but it does improve his season-best of 1:46.16 from the Georgia Tech Invitational.

Last year, it took exactly 1:42.35 to earn an NCAA invite. While invite times usually get faster year-over-year, they don’t always get faster, especially in Olympic years by recent trends.

The article says it should qualify him for the finals later in the week. Can you qualify for finals at ACC’s with a time trial?

Sorry if I wasn’t clear – what I mean was that if he’s anywhere near as good, he’ll be in the A final later in the meet.

To eliminate this apparent advantage, they could require the time trials in an event to be on the same day as or after the event occurs in the meet.

We could also require that all swimmers follow particular dietary restrictions and specified sleeping hours leading up to swims to eliminate even more unfairness.

In all seriousness, I’m not quite sure why anyone is so upset with people time trialing events to better their times. Doesn’t affect team scores, and everyone has the opportunity to do it. And the option has always been there, but now you have progressive-minded coaches making smart team decisions. Good for them.

Why all the time trials? I am genuinely curious what the motivation is.

Usually to get cuts or best times early in a meet. Especially with the 200 yard strokes, that late in the week fatigue starts to set in.

Yep. And you get smooth water.

Virginia has even more depth in the sprints this season, so he wasn’t part of the 20MR or 800FR. Last year he had to swim the anchor of the MR (19.6). It’s smart of him to swim his best event on day 1 when he is fresh.

Good for him, but imo time trials should not be allowed to qualify for selection meets. Do it when it matters (not saying he won’t, but generally speaking)

Everyone has the same opportunity to time trial. The time trial mattered, so he did it. It’s smart to time trial an event that on the 3rd/4th day of the meet on the first night when your fresh.

If it was such a huge advantage, everyone would do it.

For what it’s worth, I’d say USA Swimming agrees with you on some level since you cannot make the National Team from a time trial. Just a thought.