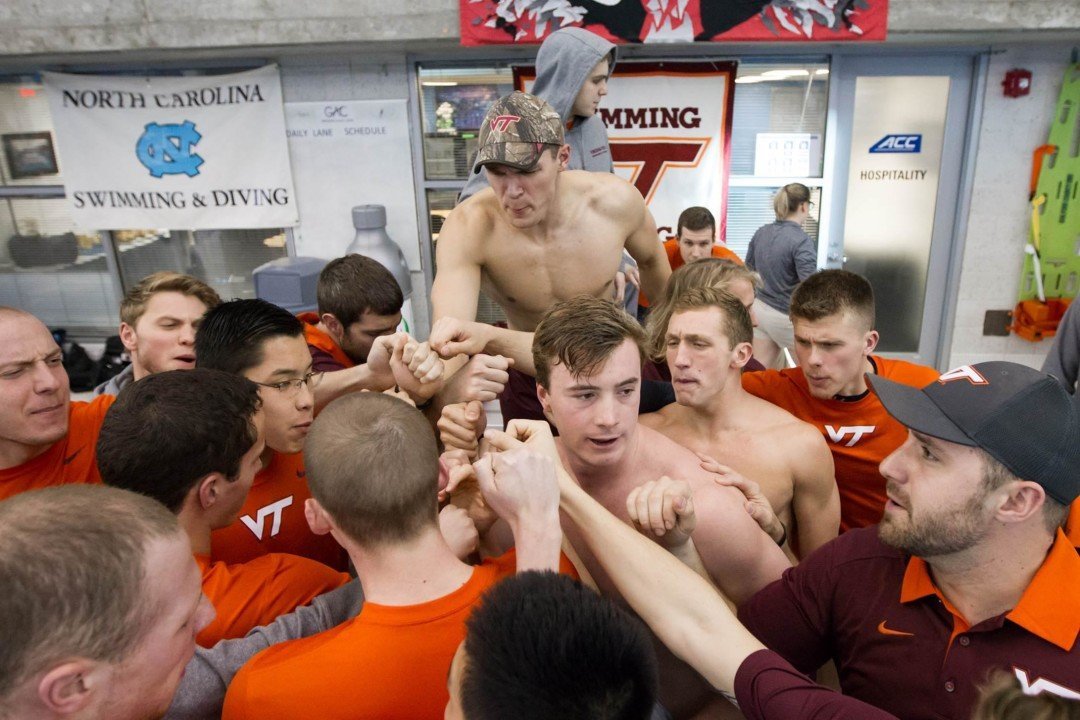 The Virginia Tech Hokies have hired Andrew Hodgson as their new assistant coach. Hodgson is a former All-American at Florida State... Archive photo via Tim Binning/TheSwimPictures.com

The Virginia Tech Hokies have hired Andrew Hodgson as their new assistant coach. Hodgson is a former All-American at Florida State and served thereafter as a volunteer assistant working with the middle distance freestyles and backstrokes (he was a two-time ACC Champion in the 200 back).

He fills the spot vacated when Nate Destree left to become an assistant coach at Michigan State.

The Hokies have also announced a number of promotions within their staff:

Full press release is below:

Hodgson has spent the last four years as the head swimming coach at New Trier Swim Club in Northfield, Ill., where he has qualified multiple swimmers for USA Swimming Junior Nationals and led the team to a top 10 finish at the NCSA Junior Nationals.

“We are thrilled to welcome Andy and his wife Alison to Hokie Nation,” said Skinner, who enters his 19th season leading the H2Okies. “I knew Andy as an All-American swimmer at Florida State and I have admired his strong work at New Trier Swim Club. Andy has dedicated four years at New Trier and has developed multiple swimmers to elite swimming as well as being highly recommended by coaches I trust. He will be a tremendous addition to our staff.”

Hodgson left Florida State as a five-time NCAA All-American, a two-time ACC Champion in the 200 backstroke and an ACC and school record holder. His time of 1:41.11 in the 200 back as a senior in the NCAA Championships broke the school and conference record.

As a volunteer assistant in Tallahassee, Hodgson coached swimmers in the middle distance freestyles and backstrokes. The England native swam professionally after graduation and placed ninth in the 200 meter backstroke at the 2009 European Championships. He was ranked 24th in the world at the time of his retirement from swimming.

Two-time ACC Female Diving Head Coach of the Year Ron Piemonte enters his 11th at the helm of the Tech diving program. Additionally, Skinner has announced staff promotions that are effective immediately.

“I am thrilled to promote Sarah to be our lead assistant and after 5 years she has developed into a tremendous swim coach and role model to our swimmers and divers,” Skinner said. “Sarah is a loyal friend who has brought tremendous energy and discipline to every aspect of our program.”

· Josh Huger, who enters his second season with the H2Okies, is now the assistant swim coach and recruiting coordinator.

“Josh has quickly shown his recruiting prowess and I am fully impressed by Josh as a coach and mentor to our swimmers and divers,” Skinner said. “Josh is a tireless worker and has brought much excitement and energy to our sprint program.”

· Morgan Latimer will now serve as the assistant swim coach. Latimer holds program records in multiple events and was an Honorable Mention All-American as a student-athlete at Tech.

“Morgan is one of our all-time great swimmers and leaders and it is an honor to work with him on deck and in the office,” Skinner said. “His passion and belief in his fellow teammates is contagious and I am confident Morgan has what it takes to develop into an outstanding swim coach.”

Fantastic hire. One of the best up-and-coming club coaches in the country now gets his shot at the D1 level. Good luck Andy