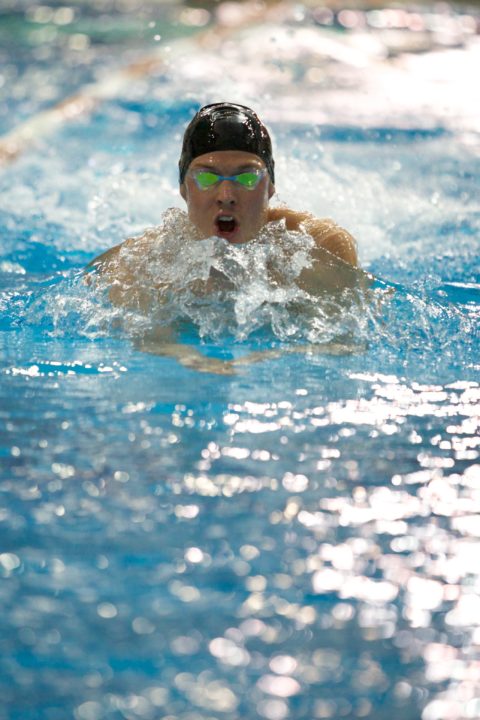 With regionals and the state championships still to go, there has already been some notable times put up around the state of Virginia this high school season. Stock photo via Rafael Domeyko, rafaeldomeyko.com

The high school season for Virginia public schools is beginning to heat up, and last weekend featured conference meets for most northern schools. Some notable times to come out of those meets:

The rest of Virginia’s public high schools will swim their conference meets this coming weekend, and the regional meets will take place over the next two weeks before the state championships on February 21-22. That means these swimmers have several more shots to better their times in big-meet situations. The state championships will run under a new format this year as the state split schools into six different classes (1A through 6A) instead of the traditional three. That means the state meet could potentially be much more selective than it’s ever been, requiring swimmers to be ready to go at qualifying time to ensure a spot at the championships.

Thanks to Robert Gibbs for contributing to this report.

Metros is a SCY destination meet for almost all participants, and its faster than the VA H.S. meets. VA doesn’t have a comparable meet since the VA H.S. state meets are not well-supported by VHSL.

Except for Andrew’s 200 Free, these wouold not even be winning time in most Western PA dual meets. I don’t understand the headline.

I’d like to see these fast dual meets where a girl going 1:58 in the 200 IM and 52 in the butterfly wouldn’t win an event – I don’t believe I’ve stumbled across one yet.

I believe HULK SWIM is being sarcastic.

I believe ASDF doesn’t understand that Jared understands that Hulk was being sarcastic.

And usually that girl is wearing two drag suits, wool mittens and socks.

99% of the time, I’m content with SwimSwam’s commenting system and I oppose any “Facebookification,” but sometimes I read Hulk’s comments and start looking for the like button or possibly a little green up-arrow.

That’s a ridiculous claim and you know it. The duel meet between NA and USC was shaved and tapered, and that was by far the fastest duel meet in western PA. Bueger was a 20.7 to win the 50, thereby disproving your statement right there. If I’m remembering correctly, Hardwick was only a 1:40 point in the 2 free, meaning both of those 2 free times would win. Don’t even get me started on the 5 free.

Get your facts straight.

someone needs to get there with a good camera… if I have to watch a 4:13 from a high schooler with a crappy shaky video again I’m going to be annoyed

Is that the meet that Conger and Ledecky swam at last year? Assuming Ledecky will be there this year?