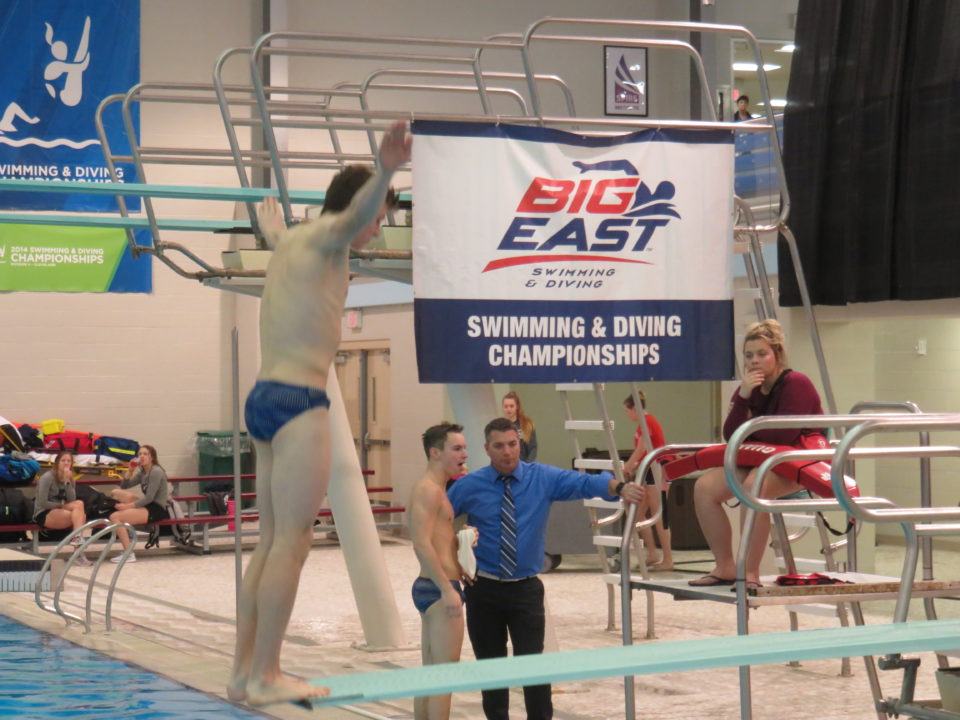 It was another exciting day at the SPIRE INSTITUTE in Geneva, Ohio as the Big East Swimming and Diving Championships went into the second day of competition. Current photo via Gerry Dunn

It was another exciting day at the SPIRE INSTITUTE in Geneva, Ohio as the Big East Swimming and Diving Championships went into the second day of competition.  After very competitive preliminary races all day – the best of the Big East swimmers and divers went on to the finals.

The women’s 500-yard Freestyle was dominated by Villanova.  Historically strong in the event – Villanova took four of the top five places to open the second day of competition. The Wildcat’s Caitlin Daday is the new Champion taking gold with a time of 4:44.91.  Christine Sullivan of Villanova finished second (4:49.75) and Christi Barret of Georgetown swam to a bronze (4:52.10).  Wildcats Andrea Fong and Emily Provenzo finished 4th and 5th pushing Villanova women to the top of the team scoreboard.

Villanova swept the top five places in the 200 IM.   Darby Goodwin repeated as Champ and took the gold with a scorching 1:59.20.  Elise Pedutti was second (2:00.55) and  Rayann Jaryszak rounded out third (2:01.14)  The top three finishers for Villanova all achieved an NCAA “B” qualifying time.

The women’s 50-yard freestyle saw a tight finish.  Alex Fabbri of Villanova out-touched Xavier’s Emily Conners to repeat as Big East Champion with a time of 22.63.   Connors took silver with 22.92 followed by Taylor Wilson of Villanova ( 23.02).  Both Fabbri and Connors time qualified for NCAA “B”.

In the 200 freestyle relay, Villanova took the gold again – matching their distance prowess with sprint success as well. Fabbri, Goodwin, Routledge and Wilson touched the wall with a time of 1:30.53 to repeat as Champions.  Xavier followed at 1:32.31 and Seton Hall took third at 1:34.83.

In the men’s 500 yard freestyle Seton Hall bested the field with Noah Yanchulis defending his title winning the event in 4:23.12.  Vadim Jacobson of Seton Hall was second (4:24.59) and John Davidson achieved a new Villanova school record finishing third (4:27.11)  Both Yanchulis and Jacobson had NCAA “B” qualifying times.

In the men’s 50 Freestyle Dakota Williams repeated as Champion with a time of 20.11.  He was closely followed to the wall by Jake Hoin from Villanova (20.56) and Samuel Johanns of  Xavier (20.63)  Williams time qualified for NCAA B.

One meter diving finals started with Villanova’s Michael Perra in the lead with a 6 dive score of 279.00.  After a balk and almost fail dive – he hung on to edge out Georgetown’s Ryan Blum (535.40) with a score of 537.30.  Georgetown took third and fourth position with Villanova’s Joe Swindel finishing 5th.

Team Scores at the completion of Day 2 – The Big East Swimming and Diving Championships: 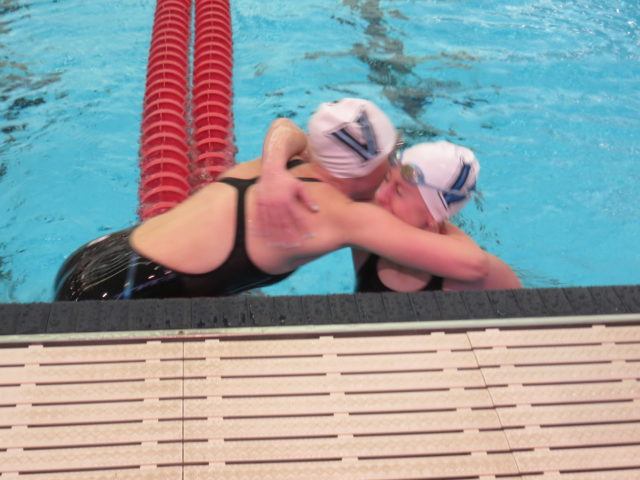 Gerry Dunn is a “Diving Dad” and resides in Washington, D.C. Gerry continues to dive competitively and is Chairman at US Masters Diving. Want to share your thoughts? E-mail him at [email protected]