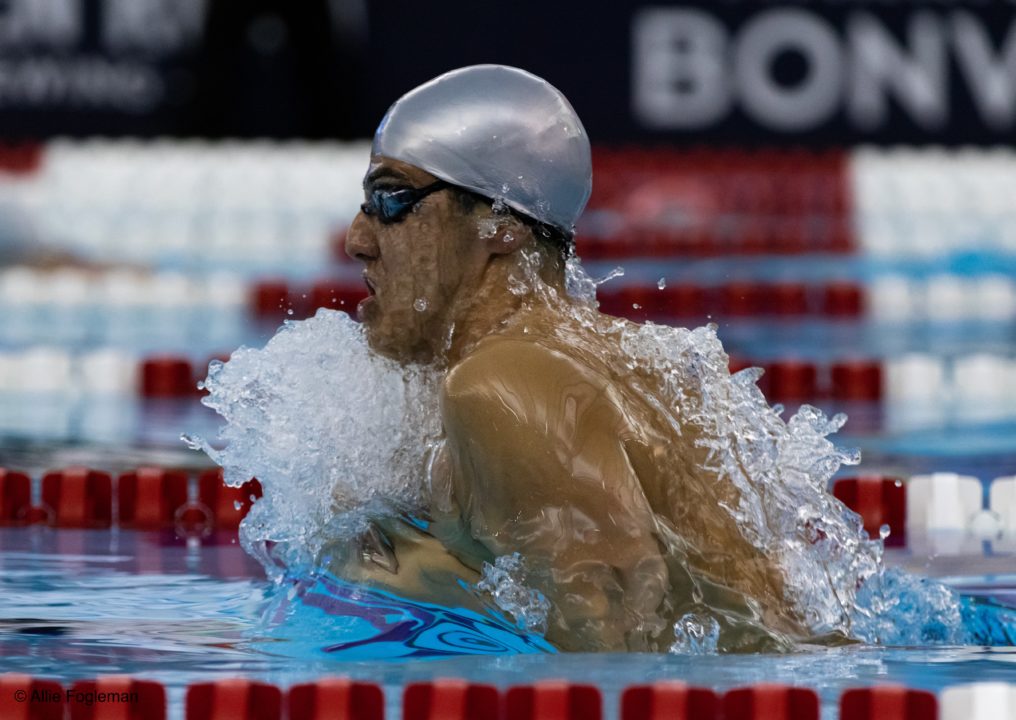 Venezuela will send 21 athletes to the 2019 Pan American Games in Lima, Peru this August. They won 2 medals at the last edition in 2015. Current photo via Allie Fogleman

Venezuela will send 21 athletes to the 2019 Pan American Games in Lima, Peru this August. Though the Venezuelan roster is strong, 2015 double-medalist Andreina Pinto has since retired from competition, leaving a void in women’s distance free, fly, and medley.

22-year-old Carlos Claverie, one of South America’s top breaststrokers, will represent the Venezuelan delegation in Lima. In 2014, Claverie won three medals at the Youth Olympics in Nanjing, and then at the 2016 Rio Olympic Games placed 15th in the 200 meter breaststroke with a time of 2:11.56, though he set the national record in prelims with a 2:10.35. From 2014 to 2018, Claverie represented the University of Louisville in the NCAA.

Leading the women’s squad is 30-year-old Mercedes Toledo, Venezuelan Record holder in the 50, 100, and 200 meter breaststrokes. At the 2015 Pan American Games, Toledo broke the national record in the 100 breast with a 1:10.53, which stood only until 2016 when she lowered it by a further 13/100ths at the 2016 Mare Nostrum. Sprinter Jeserik Pinto and butterfly specialist Isabella Paez, alongside Toledo, will look to improve upon their  6th-place finish in the 4 x 100 medley relay from 2015, where Toledo swam breaststroke and Paez butterfly, with Pinto swimming the backstroke leg in the heats.

One of the newest members of the team is sprinter Alberto Mestre, who just completed his sophomore year at Stanford, where he earned Second Team All-Academic Honors from the Pac-12 Conference for 2019.

Venezuela won 2 medals at the 2015 Pan American Games in pool swimming: both from Andreina Pinto, who took silver in the 400 free and bronze in the 800 free. She’s not on this year’s roster.

The 2019 Pan American Games will run from July 26th to August 11th in Lima, Peru. The pool swimming portion will begin on August 6th and last for 5 days.

Wonder how the country can afford a national team with their economy? Their inflation is crazy crazy bad

Wait, as far as I could tell, Mestre didn’t swim for Stanford this past season – how did he get All-American honors?

I guess the BHO looking guy has not put up a team . Its hard to judge these things from outside the country but maybe its whoever can put up a national sports team is the leader . Little Marco, not happy .

There has been a whole series of actions & threats by US backed up by bible verses tweeted by Sen Rubio.