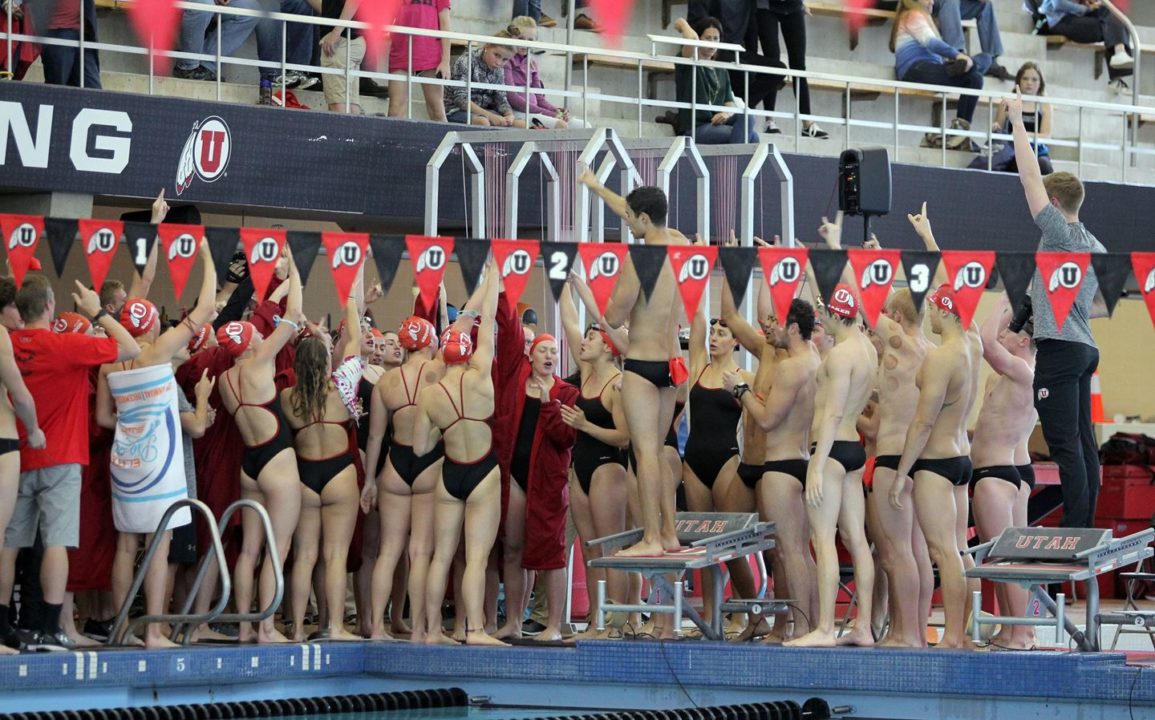 Freshmen were pivotal in Utah's win in the women's meet. Stock photo via Utah Athletics

Utah beat Arizona in a women’s dual meet for the first time in program history today in Salt Lake City. The Utes pulled off the win decisively as well, besting the Wildcats in a 174-126 decision.

Freshmen were pivotal in Utah’s win in the women’s meet. Charity Pittard won the women’s breaststroke with a 2:19.55, finishing 5 seconds ahead of the field. Pittard later won the 200 IM, posting a 2:05.53. Fellow Utah freshman Lizzy DeCecco won both diving events. In the 1 meter, DeCecco scored 255.30 points, posting the top score by over 22 points. She then scored a 249.98 in 3 meter, winning the event by 8 points.

Utah junior Leyre Casarin won both the women’s sprint free events. Casarin was the only swimmer to crack 24 seconds in the 50 free, claiming victory with a final time of 23.91. She went on to win the 100 free with a 52.09, beating out Arizona’s Kirsten Jacobsen by .52 seconds. Casarin went on to lead-off the winning Utah 400 free relay in 51.96.

“We opened really strong by winning the 200 medley relay,” head coach Joe Dykstra said. “Liam O’Haimhirgin won the 100 free, Cooper DeRyk took the 50 free and David Fridlander performed well in his first competition since the Israeli Nationals. We are exceptionally young and there is going to be a learning curve as we red-shirt a couple of our key swimmers.”

Tony Chen was the top diver, finishing second in the 3m and third in the 1m events

The Utes travel to California for a meet next weekend against UCSB on Saturday.

“Both teams are traveling to orange County next week for fall break,” Dykstra added. “We expect a hard week of training and it will be a good bonding experience for everyone.”

SALT LAKE CITY – Utah Women’s Swim and Dive earned its first win ever against Arizona with a 174-126 result on Friday.

“This is really huge for us,” head coach Joe Dykstra said. “Not many people thought this was possible. We have made incremental progress here at Utah. It is hard to build a program overnight, it takes time to build that up. Today showed our strong progress. We were a little shorthanded but our freshmen, Charity Pittard, Lizzy DeCecco, Leyre Casarin, Maddie Woznick and Kayla Miller, really stepped up.”

In that 50 free, Casarin took first in 23.91 while Woznick was the runner-up and Miller placed third. Casarin also captured the 100 free in 52.09 and was the anchor in the victorious 200 medley relay. Swimming with Sarah Lott, Mariah Gassaway and Emma Lawless, the quartet finished in 1:43.16

The women head to Los Angeles next week for a pair of dual meets with No. 25 UCLA and No. 15 USC

Brendan Meyer and Hannah Cox each placed first in two events of their own. Meyer winning the 100 and 200 Fly while Cox won the 500 and 1000 Free.

Freshman Diver Bjorn Markentin had a phenomenal collegiate debut, taking home victories in both of his events, the 1 and 3-meter dives.

Freshman Swimmer Hannah Farrow also had an amazing collegiate debut, placing first in the 100 and 200 Fly.

How is no one talking how Arizona swam????

It’s September… are you kidding?