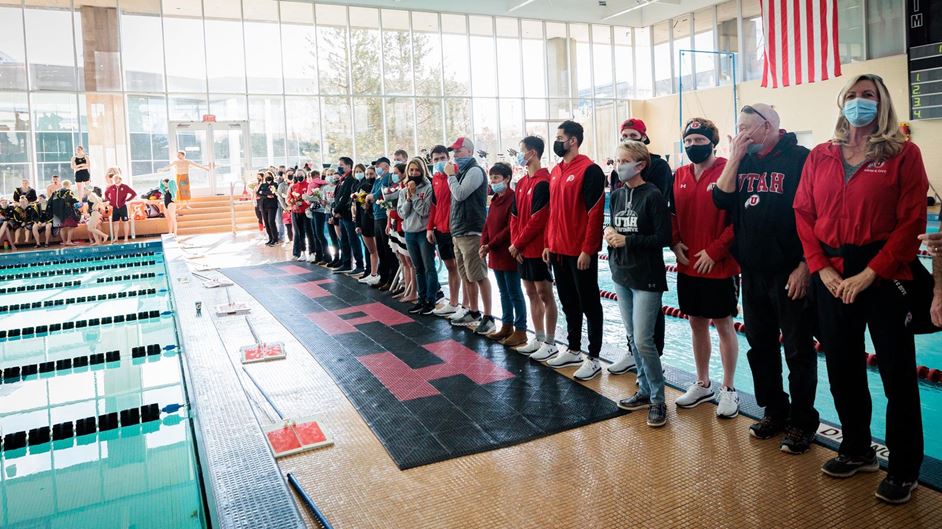 The Utes came away victorious against Colorado Mesa University and the University of Denver. Current photo via Utah Athletics

Utah vs Colorado Mesa vs Denver

SALT LAKE CITY – The Utah swimming and diving team celebrated its Senior Day on Saturday at the Ute Natatorium and were completely dominant in the meet taking home victories in 26 of the 32 total events. In their first action of 2022, the Utes came away victorious against two opponents in fourth-ranked Colorado Mesa University (489.00-110.00), according to the latest CSCAA DII rankings and the University of Denver (437.00-163.00).

In The Pool
The Utah swimming team wasted no time asserting their dominance today capturing the victory in the first nine events of the meet. Getting it all started was the team of Emma Lawless, Katie Hale, Leyre Casarin, and Madison Story who combined to win the 200-yard medley relay in 1:42.18. The men followed suit, as Matt Wilcox, Andrei Ungur, Cooper deRyk, and Finn O’Haimhirgin combined to win in 1:30.01.

Junior transfer Summer Stanfield competed as a Ute for the first time after joining the team in January and immediately showed her value taking home the event win in the 200 free (1:52.83) and 200 back (2:03.22).

The women made their presence known in the 100 back finishing 1-4. Lawless lead the way touching first in 55.26 as sophomore Kate Leary (56.92), freshman Norah Hay (57.88) and fifth year Mandy Gebhart (57.94) finished second, third and fourth, respectively. The men joined the fun as the top five finishers in the 100 back were all Utes. Ungur captured the victory (48.85), redshirt sophomore Parker McOmber finished in second (50.02) and junior JP Hynes placed third (50.55).

Junior Charity Pittard won the 100 breast in 1:04.48, but the streak of nine event wins in a row came to an end in the ensuing race.

The Utes got back in the win column as sophomore Marko Kovacic cruised to a victory in the 200 fly finishing in 1:52.13.

Right before the first break of the meet, both the men and women swept the 50 free. Junior Finn O’Haimhirgin (20.74) and Casarin (23.43) earned the victories. O’Haimhirgin and Casarin continued their strong performances as both won the 100 free.

Senior Cooper deRyk led off for the men in the 200 free relay, joined by O’Haimhirgin, Hynes and anchored by Ungur for the victory (1:21.88).

All in all, it was a banner day for the Utah program, capping the careers of several of its best swimmers. Despite the large gap in competitive action, Utah came out against two different opponents and showcased great performances.

“We are so happy to have a meet finally,” head coach Joe Dykstra said. “We definitely had some rust to kick off but the effort was solid. We will look to build some momentum towards the end of the season.”

On The Boards
Freshman Holly Waxman put together a top-ten performance all-time at Utah, finishing first in the 1m dive with a score of 298.85. Lizzy DeCecco (286.45) and Lexi Mills (271.40) followed Waxman finishing in second and third, respectively in the 1m. Waxman would later finish second in the 3m (276.70), trailing the first-place performance of teammate Mills (311.85).

The senior duo of Luke McDivitt and Tony Chen combined for excellence yet again, with McDivitt finishing first in the 3m (358.65) and Chen placing second (343.50). Utah blocked out the 3m, as freshman Ben Smyth captured third (266.25). Chen and McDivitt traded places on the 1m, with Chen scoring 321.15 and McDivitt finishing with a score of 319.95. Fellow Ute Jenner Pennock was third with 317.60, a personal-best.

“I’m really happy with how we competed today after such a long layoff,” head diving coach Richard Marschner said. “We had two personal-best performances and some near misses at PB’s, so it was really encouraging to see that our training is paying off and we’re continuing to follow an upward trajectory heading into the final month of the season.”

Looking Ahead
The Utes will travel south down I-15 next weekend, Jan. 28-29, to compete against in-state rival BYU for a dual-match inside the BYU Richards Building Pool. The two-day meet will begin on Friday at 5:00 p.m. MT with the diving events. On Saturday, the meet will start at 11:00 a.m. MT with the swimming events.

After winning the 100-yard backstroke in a Friday tri-meet at BYU, Sampson claimed the victory over 200 yards on Saturday, touching in one minute, 49.44 seconds to lead the Maverick men, who dropped team decisions to the host Utes (239-61) and another Division I opponent in the University of Denver (159-141).

On the women’s side, Wright touched second in the 200 free with a time of 1:53.87 while Matoskova took second in the 200 back with a mark of 2:04.84.  Borgenheimer had two third place finishes and finished the 400 IM in 4:31.89, which with the available altitude adjustment of 5.0 seconds, will put her atop the Rocky Mountain Athletic Conference’s season-long performance list and up one spot to fifth in Maverick all-time history at 4:26.89.

The Maverick women, now 11-10-1 in duals this season, also received top-5 finishes from Amelia Kinnard, Izzy Powers, Davy Brown and the 200 medley relay team of Lauren White, Borgenheimer, Brown and Powers, but those were not enough for the Mavericks, who dropped team scoring decision to the Utes of the Pac-12 (79-221) and the Pioneers (82-218), winners of the last eight Summit League titles.

The Maverick men (9-6) had 12 total top-5 finishes throughout the day as Sampson, Kuba Kiszczak, Urbanek and Austin started the day with a third place 200 medley relay effort of 1:33.18.

Meanwhile, Sampson finished fifth in the 50 free, touching in 21.36 seconds while Barrett finished fourth in the 100 free with a time of 46.47.

Later, freshman Jeremy Koch placed fifth in the 200 back at 1:53.75 behind Sampson while another freshman in Stef Teutsch finished fourth in the 500 free after touching in 4:49.51.

On the diving boards, Tanner Belliston led CMU with a fourth place finish on the 3-meter with a score of 260.85 points.  Kyra Apodaca led the Maverick women’s divers with sixth place finishes in both the 1 and 3-meter events.

The Mavericks will now begin final preparations for the RMAC Championships, which they will host at the El Pomar Natatorium in Grand Junction, Colorado from Feb. 9-12.  Both CMU teams will be looking for their fourth successive team titles.

PROVO & SALT LAKE CITY – The University of Denver Swim and Dive team wrapped up two tri-meets this past weekend in Utah. The Pioneers competed at BYU on Friday before heading to Utah for another meet on Saturday.

In Provo, the Pioneers competed against Colorado Mesa and the host Cougars. DU picked up the head-to-head win over the Mavericks on the women’s side with a 205.5-94.5 victory on Friday.
The women’s team picked up four first-place finishes in Alfaro, Antonini, Reminington and Leckie.

For the men, Nosack was the lone Pioneer to record a win, picking it up the 200 IM.

Alfaro, Maeda and Nosack helped lead the way for the Pioneers as both the men’s and women’s teams picked up head-to-head wins over CMU.

Nosack racked up three victories in the 100 and 200 Breast along with the 400 IM. For Alfaro, she took first in the 200 Butterfly while Maeda won the 200 Breast.

DU returns home to host the Sprint Eliminator on Saturday at 1 p.m. MT.