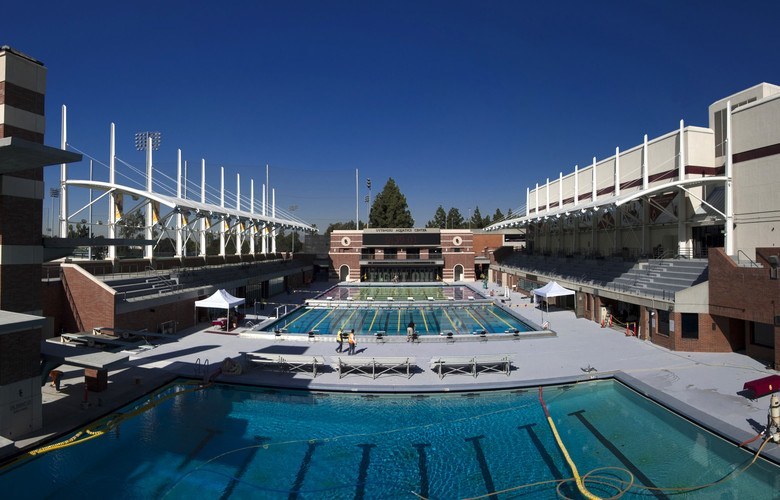 In the first official meet at the newly-remodeled Uytengsu Aquatic Center, USC cruised past Utah, though Utah's Soedel stole some of the spotlight with a pair of impressive 100 freestyles. Archive photo via ohn McGillen/http://johnmcgillen.photoshelter.com/

In a very odd senior day meet in Los Angeles, the USC Trojans celebrated the dedication of the newly renovated Uytengsu Aquatic Center on Saturday by thumping in-conference rivals Utah in both teams’ last meet of the regular season.

The final score was 134-117, but exhibitions are the only thing that kept it that close – by the end of the 50 freestyle (event 12 of 21), USC had built a nearly 80 point lead before they stopped taking points for their wins during event 17.

USC started with a 1-2 finish in the 200 medley relay, including a 19.44 anchor from Cristian Quintero, who’s at his best in middle distance races. Back on that USC relay was Luca Spinazzola, after missing a few meets, which should line them out extremely well headed into NCAA’s.

Oddly, Utah didn’t use their top sprinter, Nick Soedel, on the medley relay (though Ken Tiltges did have a good anchor for them anyway in 19.87). They also didn’t use him in the individual 50 free, where he could compete for the Big Ten title. Instead, Soedel only swam two races, beginning with the 100 free – and it was quite a 100 free at that. He won the race by a second-and-a-half with a 42.64. That’s the second-best time of his career, and overall he’s now gone the four fastest 100 freestyles of his life this season.

Soedel did really well under the last coaching staff at Utah, but with Joe Dykstra taking over this year, his sprinting has gone to a whole new level.

He took that win in his lone individual event, and was supplemented by teammate Kristian Kron, one of Utah’s other stars, who was a 1:45.30 in the 200 backstroke to top USC’s Jeff Swanston (1:46.21).

Bence Kiraly added a win in the 500 free in 4:24.25 for the Utes, as they too look very good headed into Pac 12’s (though they’re not yet deep enough to compete with teams like USC and Cal at a conference meet).

Dylan Carter, who only joined the Trojans’ roster at the semester, had a single swim on Saturday, and it was a win in the 100 backstroke in 48.75. USC sophomore Ridge Altman took the win in the 100 breaststroke in 54.93, which just misses his lifetime best in the race. Altman is not a well-known name nationally, but he could be set up for a big junior year after beating USC’s ‘A’ breaststroker, Sergio Lujan-Rivera, in that race (55.22).

Everything culminated with the men’s 400 free relay, where USC put up four seniors against Utah’s top four in what might be the Utes’ best relay. Utah jumped out to a lead at the halfway mark, thanks to putting Soedel on their 2nd leg where he split an incredible 41.48. But despite the Utes being strong across-the-board, USC’s Jack Wagner had an outstanding 43.86 on the 3rd leg to give the Trojans the lead.

Karl Holmstrom anchored for Utah in 44.14, which was faster than USC’s anchor Chase Bloch (44.60), but Bloch had just enough of an edge to give USC the win by .02 seconds. Both teams were under the old Pool Record in the event (USC, it seems, is carrying the Pool Records over from before the renovation – which makes sense, as the actual core of  the pool (gutters, etc.) didn’t change in the remodel.

Full meet results can be found here, and the men’s Pac 12 Championships begin in two weeks in Federal Way, Washington.