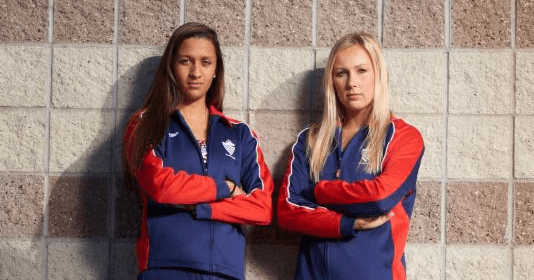 USA Synchro has announced its duet for the 2015 Pan Am Games next month. Anita Alvarez (Kenmore, N.Y.) and 2012 Olympian Mariya Koroleva (Concord, Calif.) will compete at the Pan Am Games in Toronto on July 9 and July 11. Current photo via USA Synchro

INDIANAPOLIS – USA Synchro has announced its duet for the 2015 Pan Am Games next month.

Anita Alvarez (Kenmore, N.Y.) and 2012 Olympian Mariya Koroleva (Concord, Calif.) will compete at the Pan Am Games in Toronto on July 9 and July 11.

Alison Williams was selected as the reserve athlete.

“Mariya and Anita are a natural pair,”said Myriam Glez, U.S. National Team coach. “Mariya brings stability and experience, and Anita brings freshness and length, so they complement each other well. They have been regularly improving over the last few months, and I think they will do well at Pan Ams.”

The U.S. team that will compete at the Pan Am Games (also on July 9 and July 11) were selected last month. They are:

Alvarez and Koroleva won bronze at the U.S. Open last Saturday. They finished sixth at the French Open in March in their first competition as a duet. They both were members of the U.S. team that won the team tech event at the U.S. Open and gold at the U.S. National Synchronized Swimming Championships in April.

Koroleva teamed with Mary Killman to win silver in duet at the 2011 Pan Am Games.

She made her Olympic debut at the 2012 Games, finishing 11th in duet with Killman.

Williams, a member of the 2012 U.S. Olympic Training Squad, won silver with Koroleva at the China Open in April.