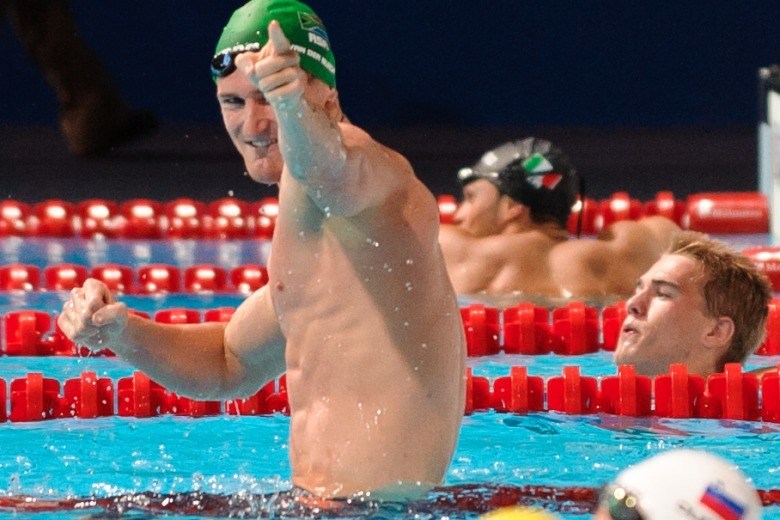 "The reality is that you just ‘borrow’ a record... Current photo via Victor Puig

What does it mean to hold a world record? In an interview with SuperSport Van der Burgh explained that swimmers simply borrow records, “Records are obviously important,” said Van der Burgh.

“But the reality is that you just ‘borrow’ a record. What is special about breaking a record is that your name will appear in the history books because you were the best swimmer in the world at a specific time. This is quite impressive, so for me records are important. I like the challenge of constantly pushing the boundaries.”

“The ultimate would be to set a time that no one else can improve on.”

Going into the 2014 European Championships Van der Burgh still had the long course 50 and 100 breaststroke world records on loan, that is until Peaty broke the 50 in Berlin and then the 100 at the British Championships earlier this year.

“I see it as a challenge he set for me to up my own game. He is now the ‘Top Dog’ who everybody will be striving to beat and that suits me.”

Peaty is borrowing the 50 and 100 breaststroke records at the moment, but still does not have a World Championship or an Olympic gold, something that Van der Burgh does.

“It is not true that it becomes more difficult to motivate yourself later in your career. Remember swimming is my career and I love to race. The fact that there is nothing higher to achieve does not mean that your hunger to win diminishes. The challenge for me is to see how many more races I can win before my career comes to an end.”

“I am at a stage where I am beginning to realise that I am not going to swim forever. So I enjoy everything a little bit more, realising that it might be my last World Championships, last Olympic Games, etc. This motivates me to make the most of every opportunity that comes my way and it is always important for me to perform at my best.”

As Van der Burgh is starting to come closer to the end of his career Peaty’s is just in its infancy. In fact the 20 year old Brit has never competed at a World Championships.

The two will meet this weekend in Canet, the first stop in the Mare Nostrum series.

With Peaty eager to solidify his position as the best in the world and Van der Burgh hungry to take back a record or two the head to head match up in Kazan could be an exciting one.