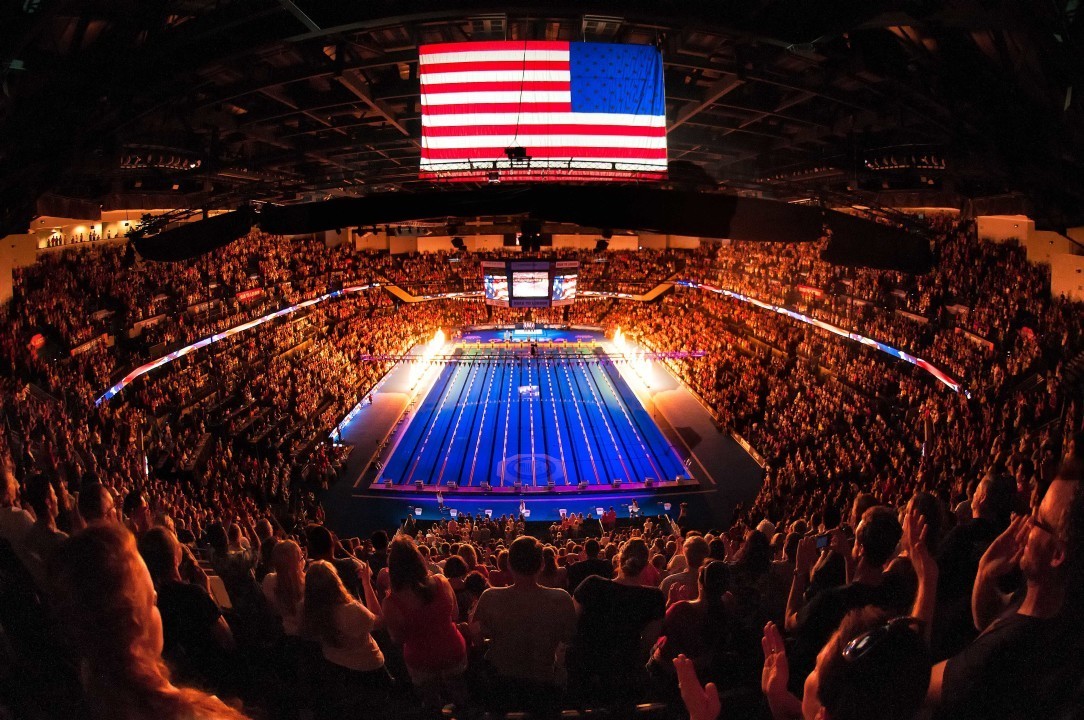 USA Swimming released a new Trials qualifier list this week updated with all swims through June 7th. This is likely the last such list before the the official psych sheet is released.

This is a list of qualifiers, not entries, so it contains a lot of times that won’t be competed at Trials (ex. Michael Phelps 200 Breast), or swimmers who have retired (ex. Katie Hoff). The deadline to get a qualifying time hasn’t passed, so more swimmers could qualify this weekend.

7 swimmers are listed as qualifiers for the women’s meet as 13-year olds – Tristen Ulett of Dynamo Swim Club, Ella Nelson of Nashville Aquatic Club, Alex Walsh also of Nashville Aquatic Club (both Nashville swimmers were born within a month of each other), Phoebe Bacon of Nation’s Capital Swim Club, Reagan Smith of Riptide, Isabel Gormley of Asphalt Green Unified Aquatics, and the youngest Abby Arens of Marlins of Raleigh. Of the 7, only two (Ulett and Bacon) will still be 13 when Trials start. The best seed belongs to Walsh at 12th in the 200 back.

There were two 14-year olds who qualified for the men’s meet – Ethan Dang of King Aquatic Club and Carson Foster of the Mason Manta Rays. No one that young has swum at a men’s Olympic Trials since Max Jaben in 2000. Of the two, Dang has the best seed at 73rd in the 200 breast, and he’s also the youngest of the two. There were 25 15-year old’s who qualified for the men’s meet.

On the other end of the age spectrum, there are 5 men 31 and older who qualified-  Ryan Lochte, 31, of SwimMAC Carolina, Adam Ritter, 31, qualified unattached, Kevin Swander, 32, of Gamecock Aquatics, Anthony Ervin, 33, of California Aquatics, Jeff Natalizio, 34, of Gators Swim Club, and Ed Moses, 35, of Golden Rebels. There are 2 women 30 and over – Kim Vandenberg, 30, of New York Athleic Club, and Natalie Coughlin, 32, of Califorinia Aquatics.

Where are they from:

By LSC, 55 of the 59 USA Swimming LSC’s have qualifiers. The four without qualifiers are Alaska, Wyoming, Border, and Mississippi. The top LSC’s by qualifiers were mostly from California (Pacific is the coastal area of the northern half of Califorina).

There are 505 clubs with qualifiers (there is double counting in this number. ex Missy Franklin counts for the Colorado Stars and California Aquatics). The top ten clubs are:

Your numbers are inaccurate. Nations capital has 25 swimmers competing at Olympic trials.

Hi Jana – this is not a list of numbers of swimmers who are swimming at the Olympic Trials. This is a list of numbers of swimmers qualified from a club for the Olympic Trials as of the last lists USA Swimming published, which are not final lists and allow about 2 weeks of lag for more qualifiers, plus not all swimmers who qualify race, and frequently swimmers represent clubs at trials with whom they don’t actually change.

I am really excited to see how Danielle Galyer will perform!

Only Bacon and Ulett will be 13 at trials. You also missed Olivia Bray who is 14. On the men’s list Liam Bell qualified at 14.

I don’t know who they are repping, but NC State said they had 33 qualifiers as of last week.

coacherik – we’ve heard from many, many college coaches who claim that they should be ranked higher on this list. In every case, the reason they’re not is because they have their swimmers representing different clubs so that they can earn more coaches’ credentials to the meet.

It’s sort of a “you can’t have your cake and eat it too” situation. If you’re going to game the system to get extra credentials or to improve relationships with their hometown club coaches, which is within the rules, you lose the ‘shock’ value of having so many swimmers as part of your team in the official qualifications lists and psych sheets.

Several of the local NC State kids are swimming for MOR at trials. It is known.

is she related to David Berkoff?

Sure is. Backstroke legacy.