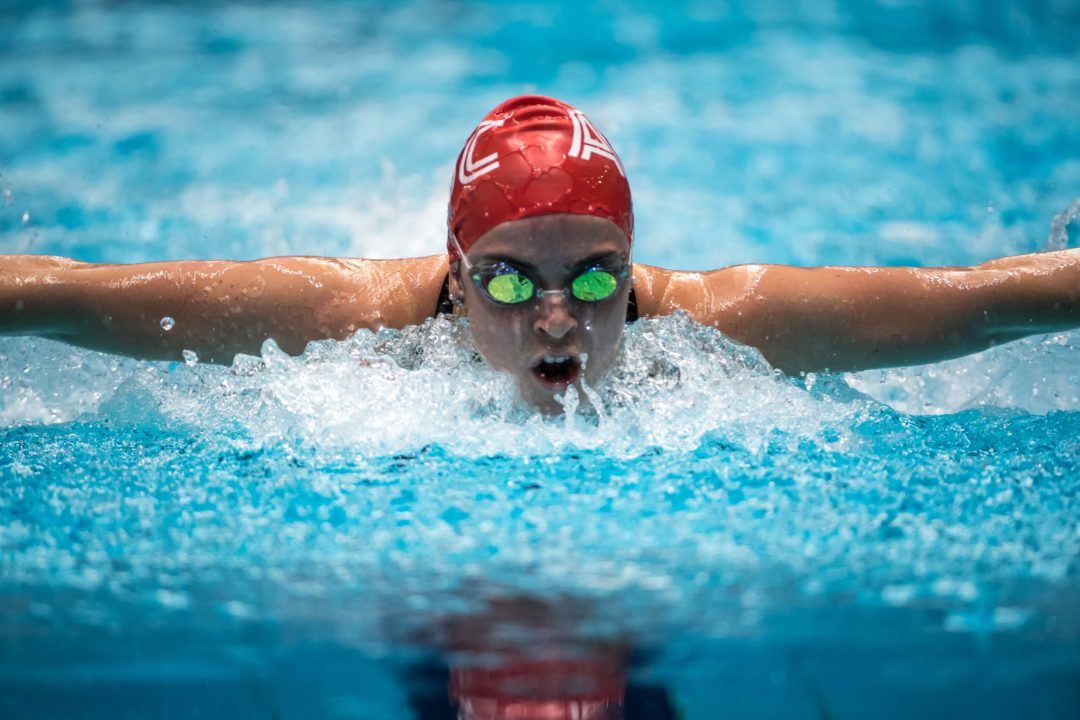 Dakota Luther is the top 200 fly seed, getting back to racing after making semifinals at the 2017 World Champs. Archive photo via Mike Lewis/Ola Vista Photography

The 2017 U.S. Junior Nationals will be held in Long Island next week, running from August 8th-12th in the same pool that’s hosting the currently running U.S. Open. There is a ton of young talent set to race next week, and we’ve outlined below some of the biggest names and races to watch for at the meet.

The women’s sprints/strokes are looking very stacked. LIAC’s Margaret Aroesty, Magnolia’s Lucie Nordmann, Aquazots’ Eva Merrell, and Gator Swim Club’s Isabel Ivey are all over things in multiple events. Aroesty is entered in 8 events, holding top seeds in the 100 and 200 breast and the 200 and 400 IM. Nordmann is the top seed in both backstrokes, while Ivey is seeded very highly across her six events (50, 100, 200 free, 100 back, 100 fly, 200 IM). Merrell is the top 100 fly seed and #2 in both backstrokes behind Nordmann.

On the other end of the spectrum, the distance events on the girls’ side will be hotly-contested. After just winning the 400 free US Open title, Erica Sullivan from Sandpipers of Nevada headlines as the top seed in the 400, 800, and 1500 frees. She’ll feel some heat from La Mirada’s Taylor Ault, though, along with names like Madelyn Donohoe of The Fish and Miranda Heckman of Pleasanton Seahawks. NBAC’s Easop Lee is also going to be making waves next week, as the top seed in the 200 free who will also race the 400, 800, and 1500 free, along with the 400 IM.

For the boys, Carson Foster and Jake Foster of Mason Manta Rays are two big names who are all over the psych sheets. Carson and Jake are seeded 1st and 2nd, respectively, in the 200 IM, while Carson is the top seed in both backstrokes and 5th in the 200 free. Jake is seeded 1st in the 400 IM and 4th in the 200 breast, while both will race the 200 fly and a couple other events.

The men’s 100 breast will get a great matchup between Penn Charter’s Reece Whitley and King Aquatic Club’s Daniel Roy, two of the top breaststrokers in 17-18 history. Whitley is seeded 1st at 1:00.95, with Roy 2nd at 1:01.72– it’s one of just two races for Whitley (the other being the 100 free), while Roy is the favorite for the 200 breast. Whitley will be racing all three breaststroke distances at World Junior Championships later this month, while Roy is set to race the 200 breast.

We’ll get to see world junior record holder Alexei Sancov of Terrapins in action, along with three more members of the U.S. World Juniors roster. Sancov, a Moldovan Olympian, is the top seed in the 100 and 200 free, as well as 3rd in the 200 IM. Meanwhile, Irvine Novaquatics’ Andrew Koustik, Bolles’ Will Davis, and North Texas Nadadores’ Jack LeVant are going to race at World Juniors and they’re racing at U.S. Jr Nationals, too. Koustik is top seed in the 200 fly and Davis in the 50 free, while LeVant is seeded #2 in the 200 fly and 200 free and #3 in the 100 fly.

Is there any reason why the psych sheet links don’t work? I’ve tried to access them multiple times through this page to no avail.

Some big names who will swim at world juniors are not in the psych sheets but it’s still a very talented field.
Youngest swimmmer entered is 12-year-old Zoe Skirboll.
I can’t believe that one of my favorite US young talents Isabel Ivey will not swim at world juniors. Hopefully she can rebound after very disappointing world trials. I still think she has everything to be one day one of the best 200 free swimmers in the world. Tuggle/Ivey/Comerford/Ledecky in the 4X200 free relay final for USA in Tokyo? I know, it’s very early. But I like making predictions. Maybe Missy will be back at her best too.
Warm-up meet for Whitley before world juniors. Not a very… Read more »

I was actually surprised at the number of Jr Worlds swimmers in this meet seeing as it is just a week out from it. Meets and travel wear a body down. Not to mention a bad swim getting in your head. Not sure what the coaches are thinking with the double up. Any Jr World swimmer should have made the US Open, NCSAs, YNats their tune up meet then gone home to work the taper magic.

I had the pleasure of watching Zoe Skirbill race at Eastern Zones last summer. She’s definitely one to watch!

Yo bobo was the first time she had a good idea and I didn’t think she would have been a bad sister but she didn’t have a great game lol I didn’t have time for her.

Let’s see if Reece Whitley can break a minute in the 100 breaststroke.

I don’t think height matters as much in the breaststroke, compared to say the backstroke.

If you did a bell curve comparing backstrokers and breaststrokers, there would be a difference, with the backstrokers taller.

Beisel and Thoman were beaten by taller competitors – Franklin and Grevers.

Your Wikipedia says 5’9. You might want to update that.

It’s a very rare 18 and under who can break 1:00 in br. Not everyone is MA, though Whitley is very good.

I’m taking the opportunity of that article to talk about the European youth olympic festival. I believe there has been no report on swimswam. It was held in Hungary during the week of world championships.
Some fast swims. Russia, Hungary and Italia have dominated the meet. Promising week for a few French swimmers too.
Reminder: boys are born in 2001 or 2002 and girls in 2002 or 2003.
15-year-old Andrei Miniakov from Russia was the most impressive swimmer of the meet. He won the 100 fly in 52.06 and the 100 free in 50.23!
Best French performance came from 16-year-old Hugo Sagnes who won the 400 free in 3.51.98. He destroyed Yannick Agnel’s French NAG record… Read more »

What is your assessment of Russian swimming? They got to the top of the podium this time in several events.

at the WC in Budapest.

Not Bobo ‘s but look at the EYOF Russia & Hungary & Italy with virtually the same strengths as the seniors . Ru= form strokes & thus medley relays & not anything in the distance . Hungary in the 200form & ims .

One intsresting note was Rusia mixed medley relay where going with a F M they were already in 2nd place ; went on to win by 7 secs. They also broke Girls & boys medley relay records by a big margin .

I don’t know if that’s still the case but Andrei Minakov has trained last year at Terrapins Swim Team in California.

Shoutout to Kenisha Liu to being qualified for Juniors in every stroke! I believe she has Juniors cuts in the 50/100/200free, 100back (winter), 100/200fly, 100/200breast, and 200/400im, and with the exception of backstroke, she is amazing in all of them! It seems she struggled a little bit at UCLA this past year but it rebounding training with Brea Aquatics again this summer. I think she is definitely a name to watch in the future – as she has been in the past! So while a couple people have mentioned her as a “sprinter,” I would say someone who also has a 2:29 200breast and 4:47 400im and a 2:13 200fly is purely a sprinter! Definitely one of the most versatile… Read more »

I didn’t say she was just a sprinter. I said she was part of a great group of sprinters. Of course she’s very versatile.

Why are there so many dislikes

Countless elite swimmers, esp IMers, have multiple Jr cuts in multiple strokes/events. It doesn’t make you a better swimmer if you choose to swim a max # of events allowed at this level. A case in point: she swam 8 events at last year’s summer jr in Minneapolis but her highest finish was one 3rd place, winning a meaningless high point award with zero best times. She is no Iron Lady, just an unwise swimmer.

Dang little harsh don’t you think
She did what she needed to do to achieve a goal. I doubt her original plan was to swim 8 events. Who in their right mind thinks that? But she decided to switch up her plans to get a high point.

I keep trying to access the meet info and I cannot. Can anyone help?