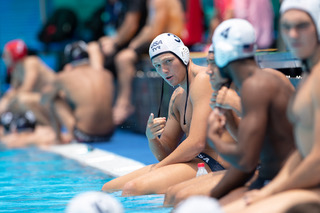 Italy rallied from two goals down with 18 seconds left to force overtime, but Team USA bounced back in the extra shootout session to secure the win. Archive photo via “Rafael/Domeyko Photography”

Hannes Daube and Chase Dodd scored four goals each with Adrian Weinberg delivering 15 saves in net. Team USA gave up a two-goal lead in the final 18 seconds as Italy staged one final rally to force the extra session. Weinberg made the only save of the penalty shootout and Ben Hallock scored on the fifth and final round to secure the win for Team USA. A replay of the match will air Sunday morning at 11:30 a.m et/8:30 a.m. pt on ESPNU. Team USA now prepares for the FINA World League Super Final starting July 22 in Strasbourg, France. The United States roster will be announced on Monday.

One day removed from a loss to Italy at Stanford, Team USA opened this match with high energy grabbing a 2-0 lead on goals from Chase Dodd and Dylan Woodhead. Italy came back with two straight to tie the match but Alex Bowen answered with a power play connect for a 3-2 lead. Italy had the final word in the first, scoring to tie the game at 3-3 going to the second. The second quarter was similar to the first with Team USA building a two-goal lead only to see Italy rally. Trailing 5-3 with 5:44 to play in the half, Italy ran off three straight, taking their first lead of the night on a score from Edoardo Di Somma. Daube found the equalizer moments later to bring the match even at 6-6 at halftime.

Tyler Abramson scored two of the first three goals to open the third quarter, giving Team USA an 8-7 lead with 6:19 to play. Marko Vavic would add two goals over the next several minutes, the second coming with :25 second in the period as Team USA took their largest lead of the night at 11-8. Italy answered on a Luca Damonte tally with just seconds to play making it 11-9 going to the fourth.

Team USA appeared to have this one in hand in the fourth as they went up four goals on two occasions. The first at 13-9 on a Dodd goal and then again moments later at 14-10 on a Jake Ehrhardt goal. Italy tried to chip away but Team USA always seemed to have an answer as Dodd scored with 2:27 left to give Team USA a 16-13 lead. That edge wouldn’t hold. After Italy cut the deficit to two at 16-14 they went 7-on-6, bringing goalkeeper Gianmarco Nicosia into the offensive end where he scored in close for a 16-15 game with 18 seconds to play. Italy then pressured Team USA on the ensuing possession and the crafty Damonte went underwater, only to emerge and steal the ball with time winding down. The left-hander scored the game-tying goal with just four seconds left as Italy executed an improbable rally. The match went to a shootout where Damonte was up first, only to have his shot blocked by Weinberg. All the other shooters converted, capped by Hallock’s goal to confirm the victory.

Awesome to see this

One of the most exciting water polo matches I’ve ever seen!
Team USA just would NOT give up and kept it close throughout the match . . . .and then the superb shoot out!
Kudos for one and all!