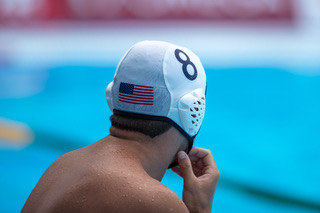 The USA Men's National Water Polo Team in a three-game series beginning March 19 as part of their preparation for the 2020 Olympic Games. Archive photo via “Rafael/Domeyko Photography”

Irvine, CA – February 28 – The USA Men’s National Team will take on Spain in a three-game series in Southern California next month. Team USA Head Coach Dejan Udovicic and company will welcome in the 2019 FINA World Championship silver medalists as part of their preparation for the 2020 Olympic Games. The competition will begin on March 19 at Foothill High School in Tustin, CA at 7pm pt. From there the action moves to Pepperdine University in Malibu, CA on March 21 at 1pm pt. That match will take place at the Raleigh Runnels Memorial Pool, site of the water polo competition at the 1984 Olympic Games in Los Angeles and will also honor the retirement of three-time Olympian and Pepperdine graduate Merrill Moses. The series comes to a close the next day at UC San Diego in La Jolla, CA with a 1pm pt start.

Tickets for all matches are on-sale now and can be purchased by clicking here. USA Water Polo members should check their email for an upcoming message regarding discounted tickets.

Team USA has already qualified for the 2020 Olympic Games following a gold medal win at the 2019 Pan American Games last summer in Lima, Peru. Spain punched their ticket to Tokyo with their second place finish at the 2019 FINA World Championships last summer in Gwangju, South Korea.