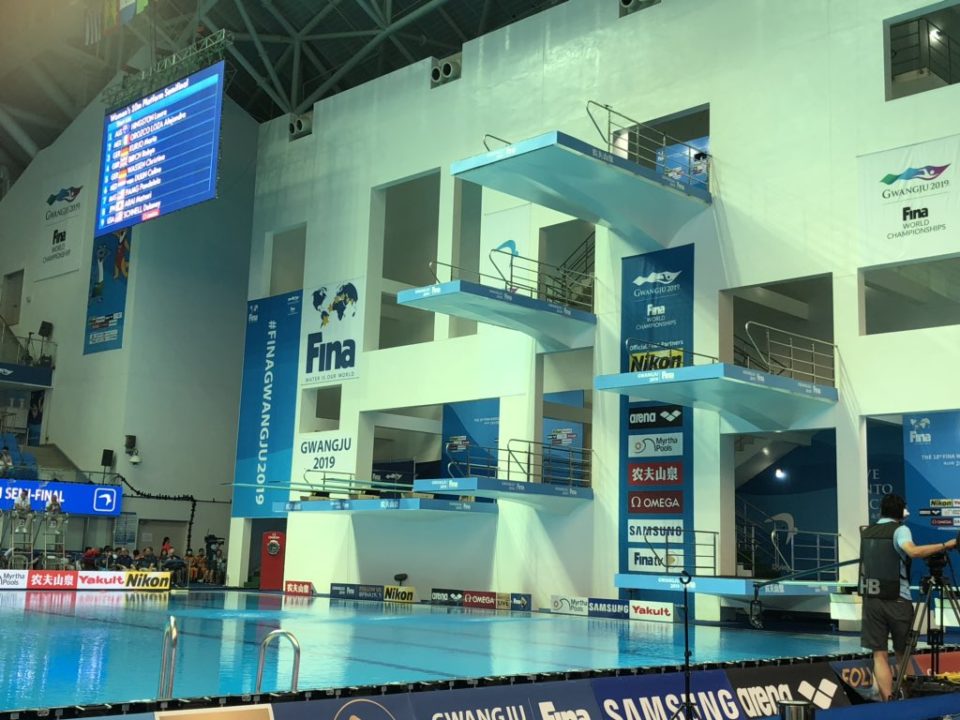 Delaney Schnell and Olympian Amy Magaña qualified for the women’s 10-meter finals at World Championships after placing eighth and 12th in the semifinals. Current photo via USA Diving

GWANGJU, South Korea – Delaney Schnell (Tucson, Ariz.) and Olympian Amy Magaña (Indianapolis, Ind.) qualified for the women’s 10-meter finals at the FINA World Championships after placing eighth and 12th, respectively, in the semifinals on Tuesday. By advancing to Wednesday’s final, they secured two quota spots for the United States for the 2020 Olympic Games.

“Team USA got two Olympic spots and those are the first two individual spots for the 2020 Olympic Games, so it feels pretty good to set the pace,” Schnell said.

Schnell qualified for the final in eighth place with 317.35 points in the semifinals, while Magaña scored 308.50 points for the 12th and last spot into the final. The top-12 finishes were key as the World Championships mark the first opportunity for countries to secure their spots for Tokyo, and only the top 12 qualify spots. Spots are for the countries, not the divers themselves.

“Now that the big pressure’s done, I’m just going to have fun and try to enjoy it,” said Schnell, who advanced to her first World Championship final. She competed at the 2017 World Championships but finished 27th and did not advance out of the preliminaries.

Schnell was never lower than 10th place throughout the semifinals. She scored 64.35 points or higher on each of her first four dives, including 69 points on a front 3 ½ pike that put her in fifth place with one round to go, but a miss on her inward 3 ½ tuck in the last round dropped her to eighth in the final standings.

While Schnell was in position to advance throughout the entire semifinal contest, Magaña had to fight her way into the final. She wasn’t in the top 12 until her last dive.

With a back 2 ½ with 1 ½ twists still on her list and 5.85 points out of 12th place, Magaña knew what she needed to do. She came through with her best score of the day for 73.60 points, enough to give her the 12th and final spot into Wednesday’s final.

“I need to know exactly how many points I have, and I need to know that I still have a chance,” Magaña said. “I was about six points back going into it, and I just turned it into overdrive and I knew I could do it. I just let my body do it.”

Although she advanced to the finals and secured an Olympic quota spot, Magaña was conflicted with the results.

“I feel a little confused, but excited. It’s great that I did it, but I feel a little disappointed about my performance, but I’ve got to let that go now,” Magaña said.