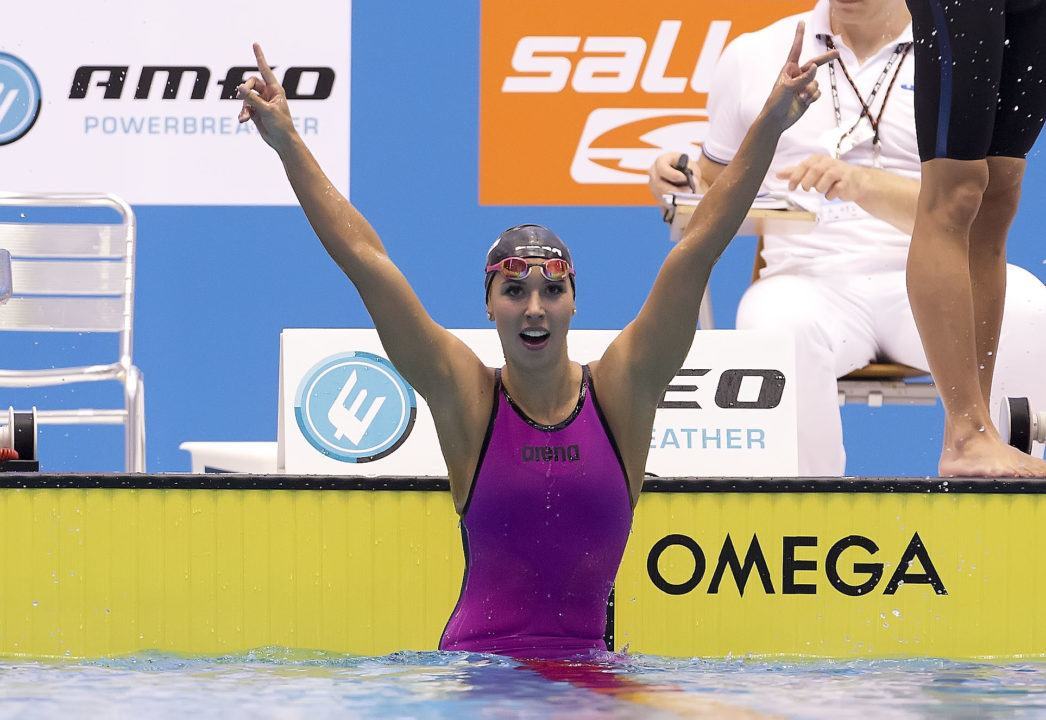 Germany’s swimmers showed some fast perfomances tonight in Berlin and some swimmers find their way into the top ten in the World Ranking: Franziska Hentke now sits second in the 200 m butterfly with her time of 2:05,77. She said in a post race interview with the German TV station “ARD” that she wanted to swim faster and wanted to attack her own German National Record.

Jan-Philip Glania now is on the fifth place in the FINA World Ranking, he clocked a 1:56,01 in 200 m backstroke final and also Christian Diener touched the wall under the nomination standard in 1:57,46. Only one woman reached in for a spot on the was „Rio long list“ in the 200 m backstroke: Lisa Graf picked up the national title in 2:08,98  followed by NCAA swimmer Nadine Laemmler and Jenny Mensing. Mensing’s time of 2:10,63 was nearly one second slower than in the morning’s prelims session and she and Laemmler did not reach the finals standard. Mensing will have another chance to qualify for Rio in the 100 m backstroke tomorrow – but usually the 200 m are her best event.

In the 100 m freestyle, Paul Biedermann as well as Steffen Deibler missed the opportunity to qualify for an individual start in Rio because they were too slow in the prelims. But every swimmer in the final seems to know that they want to show up with a 4 x 100 m freestyle relay in Rio – and three men went under the finals cut: Damian Wierling reached in for the win in 48,54, a personal best time for the 20-year old upcoming German sprint star. Paul Biedermann and Björn Hornikel touched the wall in 48,65. All three were under nomination standard but won’t get a spot on the qualification list for an individual start because they were too slow in the morning’s heats. Marco di Carli was the fourth place finisher in 48,89 – but only those men will get a spot in the relay who will confirm their 100 m freestyle performance in the next 8 weeks at another meet. German Head Coach Henning Lambertz will make the final decision based upon German National Championships and the “confirmation meet”.

On the women’s side there is a big question mark behind the freestyle relay – no woman made it under the prelims or finals nomination times. It is up to Lambertz to make a decision – but he said that he won’t have any scruples about scratching even a relay with a Rio quota place – his strategy is quality before quantitiy.

Marco Koch, World Champion in 200 m breaststroke, won the 100 m event, not under the German Rio cut but fast enough for a spot in the 4 x 100 m medley relay. He said in an interview that he is sure that he can swim under 1 minute in Rio in the relay. It was a little bit disappointing for 2016 NCAA Champion Fabian Schwingenschloegl that he made the prelims standard but then could not swam faster than 1:00,01 in the final – he clocked a 1:00,46 for the third place.

Although the German swimmers showed some weaknesses in the sprint distances -this will change tomorrow in the 50 m freestyle – 14 men and women are already on the long list for Rio – with partly excellent performances which got them into the world’s top ten. And it is not over: Tomorrow is the last day in Berlin – with Marco Koch in the 200 m breaststroke, Dorothea Brandt and Damian Wierling in the 50 m freestyle, Alexandra Wenk and Steffen Deibler in the 100 m butterfly!

Alexandra Wenk with a historic race