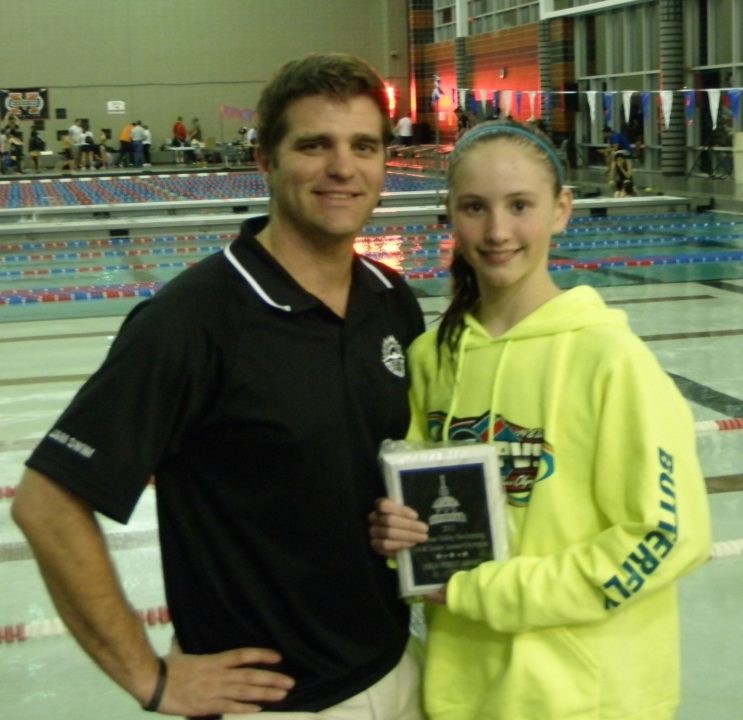 Seen here after breaking a NAG Record this past summer, NCAP's Cassidy Bayer swam her first meet of the fall this past weekend.

Bayer raced this weekend at the Rockville-Montgomery hosted National Age Group Challenge meet. With NCAP (formerly Curl-Burke) likely beginning to build into some heavy yardage, now well into the swing of their season, the 13-year old Bayer looks phenomenal. At this weekend’s meet, her first of the season, she swam a 24.30 in the 50 free, a 2:03.88 in the 200 fly, and a shocking 55.30 in the 100 yard fly.

A 55.30 is an amazing time for a 13-year old if it comes at the end of a season. Coming this early in the year, it’s shockingly good (only 7 swimmers of the same age have been better than that in the last decade, period). She’s still a long way from the 53’s that Felicia Lee was going at this age, but this is a great start to her season.

This whole meet was stocked with fantastic results, showing just how much quality age group talent is concentrated in the Potomac Valley. Full results are not yet available online, but just picking-and-choosing a few events:

Meanwhile, in Kansas, Michael Andrew has divided his focus a bit this fall. He has swum a few meets and swum very well: he’s been a 22.30 in the 50 free, and a 1:00.57 in the 100 breaststroke. He and younger sister Michaela Andrew have registered an official USA Swimming team – so no more unattached swimming for them. They are now the founding two members of Team Andrew Indie Swimming, perhaps poking a bit of lighthearted fun at their atypical training setup.
The Andrew family is currently training out of the University of Kansas pool, but Team Andrew Indie Swimming will soon have its own facility – Michael and Michaela’s father, Peter, is a former high-level swimmer and has some skills with the hammer as well. He is constructing a pool on the family’s property where the family can continue to experiment with their ultra-short race-pace training, along with other unique concepts (early pictures show that gymnastics rings will run the length of the pool’s ceiling to help the squad develop their lat and forearm strength).
The team actually has a new member; the Andrew family tells us that a lifeguard at the Kansas pool was so intrigued by their training methods, that he has joined on to learn more about what it’s about. I think that more people are probably going to become at the least intrigued with these concepts and want to join in. Even those who don’t agree with them will be incredibly interested in what’s happening deep in the heart of Kansas.
Michael’s fall has been partially spent on the football field this fall. He is a kicker in a local league, and has showed immense talent there as well – he had a perfect season on extra-points: pretty incredible at that level. His next appearance in the pool will be at the Minneapolis Grand Prix next weekend.

Thank you for the updates about these young swimmers. It’s cool to follow their careers. Great story about the pool for Michael Andrew! And very interesting training methods! His father must really believe in him to build a pool at home. It reminds me our pole vault french olympic champion Renaud Lavillenie who loves so much his sport that he even jumps in his garden. Cassidy Bayer is clearly the future big american star on butterfly. And I agree, it’s incredible to see the level of swimming in the Potomac Valley. They build 1 or 2 young champions every year. Katie Ledecky is obviously the icon of the moment. Try to follow Isabella Rongione too. I think she will make… Read more »

Male gymnasts spend many years building up their shoulder strength before rings. Girls never do them. They do bars prep via handstands strap hangs various grips & controlled swing.

Whilst it seems a good idea for swimmers & one that I have seen it also leads to injuries in much more experienced swimmers especially with wet hands & uncontrolled shoulder movement plus falls.

However I have met parents who have very good ideas . Good luck with it all.

1. Michael and Michaela really?
2. I’ve seen Michael Andrews swim he is going to burn out, he is too sprint based. Even if he does burn out he seems to be a damn good kicker in football
3. Cassidy Bayer is fast and will be a star
4. (in response to bobo Gigi) I see rongione as the next Kate Ziegler, they are from the same club, that team just kills you so they have a lot of fast kids but they have no mechanics or longevity.
If you can’t tell I’m a PVS guy

Kate Zeigler no longevity? 2 Olympic Teams is pretty damn good and the model of longevity all should try and mimic

Great Eddie Reese says that “burnout happens when you stop improving” and I believe in that – it has little to do with swimming mileage. It does not matter whether Andrews is sprint oriented or not, as long as he is getting better and enjoying success, there will be no burn-out. That said, I understand what you mean: at some point there will be a year or two (very soon) with no improvements or even swimming slower. How he and his family handle that is important. I am sure they are well aware and prepared.

If Rongione is the next Kate Zeigler I think that would be considered a tremendous success. How many people have had as great a career as Kate? Let’s keep some perspective.

I wish Isabella Rongione the career Kate Ziegler has had. 2 times 800 free/1500 free world champion in 2005 and 2007. One of the best races of all time against Laure Manaudou in Melbourne in 2007 in the 800 free. The same year an incredible and unfortunately perhaps the most underrated world record in the 1500 free in textile and which hasn’t be broken since despite the magical suits. One silver medal in the 1500 free and one bronze medal in the 800 free at the world championships in 2011. She hasn’t had the success she deserved at the olympic games but overall that’s what I call a great career.

15.42.54! Kate Ziegler has made alone this fantastic world record in the 1500 free which hasn’t been broken since despite the magical suits. Katie Ledecky will probably break it very quickly but this world record is a legendary world record.

How does seeing MA swim assure you that he will burnout? Too sprint based, care to elaborate? I am not condoning everything this family does, but you might want to read up on the training style before you comment on a swimmer burning out for being “too sprint oriented.” I too have seen him swim, training style has nothing to do with his ceiling. His ceiling is a matter of mechanics. Every swimmer has some flaws and if his are worked out, the ceiling goes higher. Fast growth can equal ROM and it appears there appeared to be a little issue with that (in my humble opinion) this past spring at Sectionals and this summer at zones. If that can… Read more »

0
0
Reply
Another pvs
Reply to  Swimmer

No mechanics or longevity is a pretty strong charge for a club as successful as the fish, flach, for instance, went there and is now at South Carolina and is super fast and still improving

0
0
Reply
PsychoDad
Reply to  Another pvs

75%+ of kids in any age group in any club in the country have poor mechanics.

Just because you have seen Michael Andrew swim, you can say
he will burn out? C’mon. This kid will never burn out. He and his father
are willing to go out side of the box to train. They don’t follow the norm of
swimming 10,000 yds a day. They do research and trial to see what works for him. He will be at Rio in 2016. Then you will see him swim again!