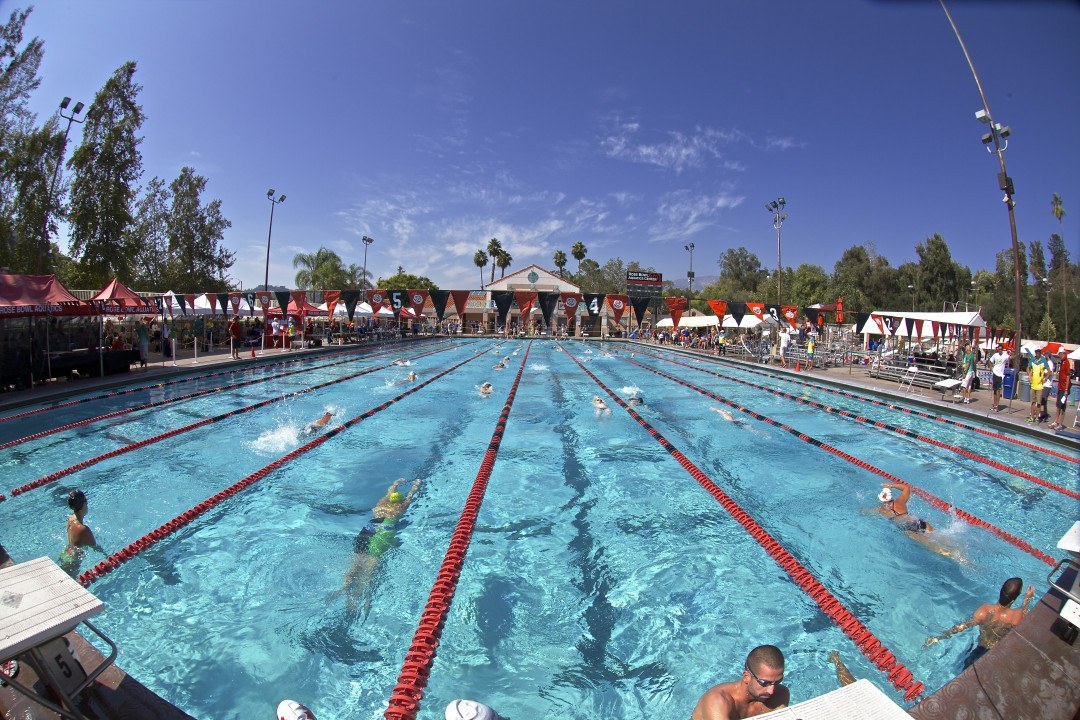 While there are not yet any confirmed cases of the novel coronavirus in Pasadena, Califronia, Southern California Swimming has decided to cancel JOs anyway. Archive photo via Lawrence Curtis/The Factory Agency

Late on Thursday night, California governor Gavin Newsom announced that all large gatherings should be cancelled. The standard set follows in the footsteps of fellow west coast state Washington, with more than 250 people being considered “large.” While we don’t know how many athletes will continue plans to participate in this meet and how many will request a refund, it’s likely that the event will have more than 250 people in attendance.

As of now, Newsom’s statements seem to be only recommendations and not mandatory.

After a day of decimation of American age group swim meets, there has been a break in the clouds. The Southern California Swimming Junior Olympic Championships (JOs) have found a new home.

Southern California Swimming says that it was the meet’s original host facility, the Rose Bowl Aquatic Center, that shut them out from the meet. After learning of the closure on Monday evening, other teams within the local swimming committee (LSC) stepped in by offering to host the event this weekend.

SCS has accepted the offer of the Mission Viejo Nadadores and the Marguerite Recreation Center, and the meet will be held there from March 12th-15th. The Marguerite Aquatic Center reopened in 2018 after an $11 million renovation and this year for the first time will also host a stop of the USA Swimming Pro Swim Series.

The closure of Rose Bowl was made after the city of Pasadena declared a state of emergency, in spite the city not having any confirmed cases of the novel coronavirus yet. Mission Viejo, which is located about 60 miles by car south, has not declared a state of emergency yet or put in place any restrictions yet in spite of Orange County having 5 confirmed cases.

While the spread of the novel coronavirus hasn’t been as drastic, yet, as in countries like China or Italy, the virus has already begun to impact many large-scale gatherings, with the cancellation of a number of conferences and conventions across the country.

On the west coast of the United States, which has seen the highest concentration of COVID-19 cases so far, this has also begun to impact sporting events. While there has been no widespread cancellation of professional events or closure to spectators as has been seen in Europe and Asia, some youth events are being cancelled out of caution.

That includes the announcement on Monday of the cancellation of the Southern California Swimming Junior Olympics that were set to be hosted at the Rose Bowl Aquatics Center. The meet was scheduled for March 12th-15th.

The move follows a state of emergency declaration by the City of Pasadena on March 4th, which was made even though the city had no known cases of COVID-19.

Southern California Swimming has also cancelled their Board of Directors meeting scheduled for March 18th.

The Junior Olympics are a championship-style age group meet, for swimmers aged 14 and under, held twice annually: once in short course and once in long course. The meet holds races for 3 age groups: 7-10, 11-12, and 13-14. The meet is not affiliated with the Olympic Games, but has been allowed the right to continue using the name because it was first used prior to September 21, 1950, under a grandfather clause.

This weekend will also have Sectional championship meets at 3 sites around the U.S.: Pleasant Prairie, Wisconsin; Columbia, Missouri; and Federal Way, Washington. So far, there has been no alterations to those schedules. Pacific Northwest Swimming, which will host the Washington sectional, has put out a statement on the topic that includes the following statement

That Sectional meet is of particular note because King County has confirmed 116 cases of novel coronavirus. King County also has 20 deaths, though 19 of those are associated with a care center for elderly or sick individuals that has been the center of the outbreak so far in the United States. There are 162 confirmed cases statewide in Washington with 22 deaths.

According to coronatracker.com, the U.S. has 755 confirmed infections of the novel coronavirus so far, with 27 deaths caused by COVID-19. The number of confirmed cases is expected to rise in coming weeks as the Centers for Disease Control (CDC) distributes more tests nationwide.

The full announcement that was sent to teams is below:

It is with tremendous disappointment and out of concern for everyone involved in this weekend’s upcoming meet, that the decision has been made to indefinitely postpone the short course JO’s scheduled for March 12-15 at the Rose Bowl Aquatics Center.

While there isn’t evidence that swimmers, coaches, officials, spectators or Center staff are at increased risk of contracting COVID-19 by attending this event, the overwhelming concern of public safety and well-being, along with a perceived increase of risk of transmission and public perception have led us to this conclusion.

We know that there are many of you who will be exceedingly frustrated by this news, and we share your great disappointment. Rose Bowl Aquatics boosters have contributed countless hours in preparation of this event, planning committees have been assessing contingency plans and a significant level of expense has already been incurred and may or may not be recoverable. The reality is that none of that is more important than the safety and well-being of all those who were planning on being at the Center over the weekend. We are hopeful that we all can agree that the public interest outweighs any individual interests or views.

Please know that we will continue to stay in contact with SCS, as well as local, county, state and national public health officials in order to determine when it is safe to host this event. SCS will make the decision as to when and if this meet will be held in the future. Plenty of notice will be given to all teams.

Thank you for your patience and understanding. Collectively, we have been working to determine the most safe, wise and fair way forward. Unfortunately, the ever-changing nature of this virus, and our collective reaction to it, are making it extraordinarily difficult, if not impossible to determine, beyond any doubt, that we can deliver a safe event for all concerned without risking transmission.

Should you have questions about this event, or the implications of the event being canceled, please communicate with Rose Bowl Aquatics coach and business manager, Mr. James Gallagher. His email address is [email protected]

Thank you again for your commitment to the sport of swimming, to the participants and officials. This extremely difficult decision is something that we all hope is a once in a lifetime challenge. We wish you and your families the very best and we look forward to being able to share with you a rescheduled date for this event in the not too distant future.

Pacific Swimming has also cancelled their JOs this weekend.

Ivy League canceled their basketball tournament. New England YMCA Champs has been cancelled. I’m sure there are more events coming.

Absolutely stinks that the Y swimmers won’t have an opportunity for a last chance at Nats. That brings up a very important question as to whether Y nats will also be cancelled.!

No worries, they relocated to Mission Viejo. Go Socal!

NCAA and NBA just limited attendees. Why does Mission Viejo believe they are immune to COVID-19. I grew up swimming and made it to college swimming but this is very careless. just because the mayor of mission Viejo mayor ( Brian Goodell) is tied to the Mission Viejo Nadadores its very irresponsible to step in after it was canceled in Pasadena. why not reschedule it for a later date. Orange county has cases already and Pasadena had none. that speaks volumes. Now Mission Viejo has invited groups of swimmers and families from all over. Directly from the CDC website: Before a COVID-19 outbreak occurs in your community: Plan A COVID-19 outbreak could last for a long time. Depending on the… Read more »

You made a point. I hope coaches could read this.

I don’t see why they don’t just make some adjustments and hold the meet. No spectators except the taxi driver parents. Just do automatic timing only with one backup timer per lane.

That might be kind of fun – no parents or expectations – just kids racing!

In the case of Southern California, it was the facility’s decision, not the host team or LSC.

but the official announcement in the article doesn’t state that.

March 02, 2020: “Pasadena Public Health officer declared a Local Public Health Emergency despite ZERO confirmed cases of COVID-19 in Pasadena”. Might explain why the facility decided (or had no choice) but to cancel.

That seems reasonable for a swim meets like sectionals, but for an age group meet? I don’t know if a bunch of 10 year olds running around with out their parents )and possible no way to contact their parents if they don’t have a cell phone) is a good idea.

tell that to Ohio Swimming

I’m good with that as long as Rowdy and the crew cover the action. 🙂

Imagine- swimmers nominate one of their own to serve as team coach, timers, admin, meet officials, and everyone votes on an announcer. A meet run by kids, for kids. No adults, no rules, just fun, fast swimming.

all you can eat free candy at the snack bar!!!