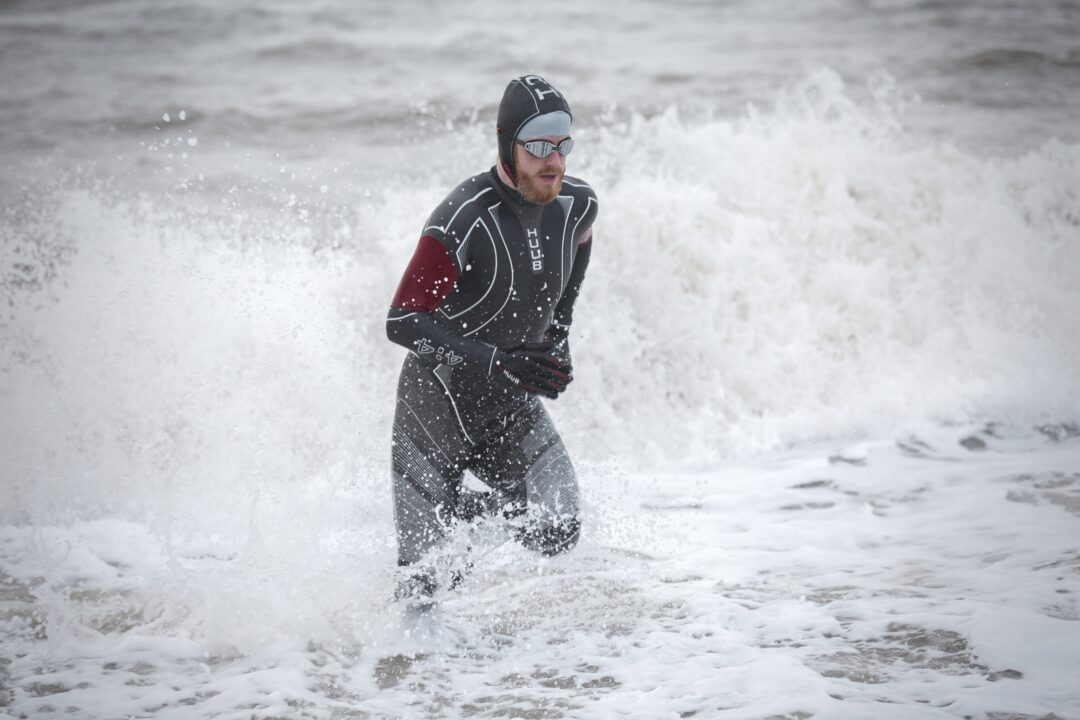 Inspired to raise money for charity in honor of his late father, Alan Corcoran became the first person to swim the entire 500 km Irish coastline in 2019. Archive photo via Alan Corcoran

With the stunning background of Ireland’s coastline, Alan Corcoran became the first person to swim the entire Irish coastline in 2019. His 500 kilometer (310.686 miles) journey was in an effort to raise money for cancer and stroke charities. His swim is dedicated to his father, Milo Corcoran, who died of cancer in 2016, and previously served as the President of the Football Association of Ireland.

His effort has turned into an Irish documentary titled “Unsinkable,” and hopes to tour in film festivals throughout 2022 and 2023.

This was Corcoran’s second attempt at the swim. He failed his first try in 2017 after his support boat sank in Newcastle, Ireland, toward the beginning of his journey.

The 500 kilometer sea swim is equivalent to swimming the English Channel 16 consecutive times. Through this expedition, Corcoran raised €29,000 for the Irish Heart Foundation and the Solas Support Cancer Centre, which is $32,366.45 in dollars.

“Unsinkable” is a film that explores Corcoran’s journey through grief, as he uses the swimming project to channel his negative emotions about death into a meaningful and inspiring adventure.

Corcoran has a background in running, not swimming. His only swimming experience was weekly lessons from ages six through twelve, but quit swimming as a teenager to focus on track and field.

“People will see me in “‘Unsinkable” swimming six hours at a time in the Irish sea, sometimes in the pitch dark. It’s easy to forget, even for me, that I was out of breath swimming 50 metres in the pool at the start of the process,” Corcoran says.

To prep for this monumental swim, Corcoran enlisted the help of Ireland’s best marathon swimmer at the time, Chris Bryan. He received one lesson from the swimming expert, occurring eight months before his first attempt. At that time, Corcoran worked in landlocked London, so he trained for about 15 hours per week in a pool.

“This approach built my swim endurance, but left me severely unprepared for the cold of the Irish sea and lacking experience in the waves. For my second attempt at the swim, I put a lot more energy towards cold water adaptation with repeated cold water exposure to build my tolerance,” Corcoran says.

Since this was not a corporate sponsored event, the logistical planning was Corcoran’s biggest challenge. “It was a one-person show to put everything in place – from funding to health and safety courses, finding a support vessel and volunteer sailors, and fundraising for the charities. All that work was on top of a demanding training schedule and a full-time desk job,” he says.

By profession, Corcoran is a town planner and the documentary serves as a passion project. To execute the film, Cororan teamed up with Emagine, an Irish creative agency to help bring “Unsinkable” to life.

“Unsinkable” is a one-hour documentary by Waterford productions from Emagine and Marathon Man, made possible through a publicly funded Kickstarter campaign, which generated 121 public backers to support a €6,160 ($6,871) budget.

Peter Grogan, the co-owner of Emagine and film director and producer, captured some impressive professional footage along the Irish coast, which complements Corcoran’s fly on the wall video updates as the lengthy swim progresses.

Prior to embarking on this swim, Corcoran completed 35 marathons in 35 consecutive days as a way to honor his father by raising money and awareness for stroke research. Through this experience, he raised €15,000 ($16,725.75) for stroke and sports charities.

Corcoran wrote a book about this accomplishment titled “Marathon Man: My Life, My Father’s Stroke and Running 35 Marathons in 35 Days.” Irish Runner Magazine listed Corcoran’s book as “A must read of 2022.”

Corcoran has advice for those who want to follow in his footsteps of swimming the Irish coastline, “Add twenty pounds of fat to keep you warm.”

“Unsinkable” hopes to be selected for the following United States film festivals:

The heart of humans: it never fails to amaze me.

Incredible. Anything we can do to support this film?