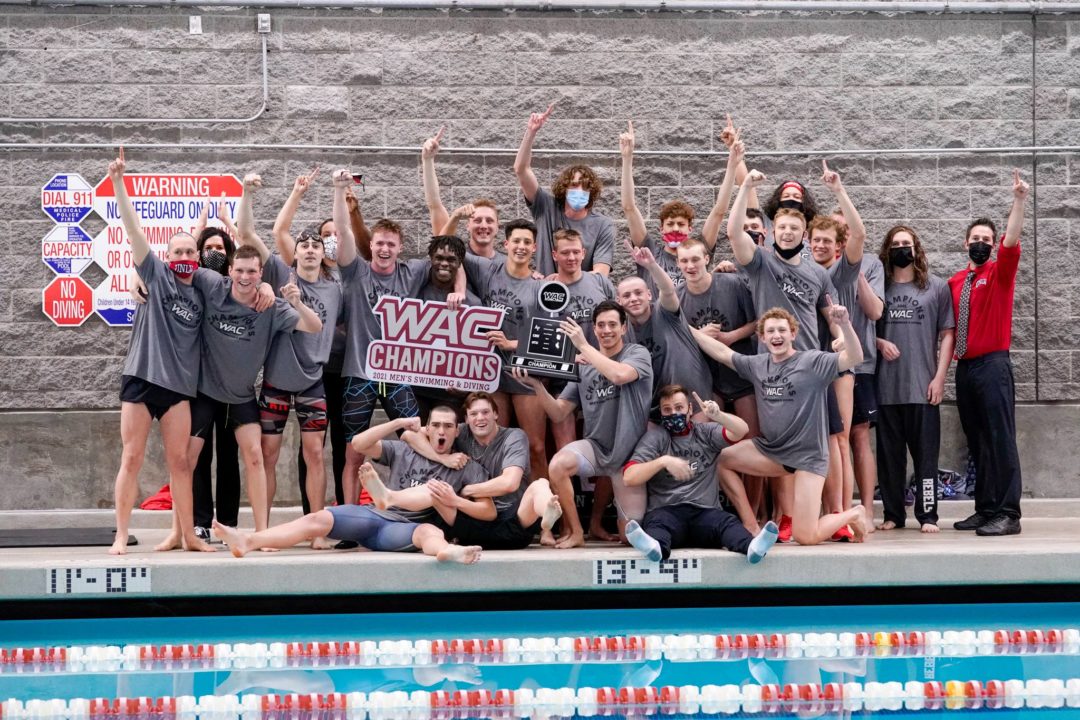 UNLV picked up a pair of wins on the night, beginning with a 1-2-3-4 finish in the 1650, led by an NCAA-qualifying performance by senior Vuk Celic. Current photo via Western Athletic Conference

The UNLV Rebels won a decisive in the 2021 WAC Men’s Swimming & Diving Championships, outscoring 2nd-place finishers Air Force by 264 points. Additionally, the Rebels just accumulated the highest men’s score in the history of the WAC Men’s Swimming & Diving Championships, which dates back to 1963. The UNLV victory also makes it a conference sweep for UNLV, as their women’s team won the Mountain West title last week.

Though the team standings weren’t close, the final race was still a thriller between Air Force and UNLV. The Rebels held the lead going into the final leg of the race, where Air Force anchor Corey Shephard charged home in 42.87 to get his hand on the wall first by .03 seconds. The Air Force squad of Wen Zhang, Isaac Gwin, Jacob Bulseco, and Shephard combined for a 2:53.25, with UNLV right behind in 2:53.28.

Air Force won another pair of events on the final night of the meet. Andrew Limpert took the 200 fly with a 1:47.34, touching first by nearly a full second. Limpert won the race by establishing a significant early lead, then hanging on through the back half of the race.

UNLV picked up a pair of wins on the night, beginning with a 1-2-3-4 finish in the 1650, led by an NCAA-qualifying performance by senior Vuk Celic. Touching the wall first by a whopping 19 seconds, Celic clocked a 14:50.34. Though it wasn’t an NCAA ‘A’ cut, we can say with certainty that his swim will be fast enough to earn an invite to the Men’s NCAA Championsips in March. 14:50.34 ranks Celic 10th in the NCAA this season, with only a handful of conferences left to have championships before NCAAs. Rebels Cameron Castro (15:09.01), Christopher Mykkanen (15:12.70), and Cooper Kiel (15:26.16) rounded out the top 4.

UNLV’s other win on the night came in the 200 back, where Panos Bolanos posted a 1:44.29 to win the event by over 2 seconds. Bolanos swam the fastest split in the field on each of the first 3 50s.

Cal Baptist also picked up a win on Saturday night, with Eric Tolman posting a decisive victory in the 200 breast. Tolman swam a 1:56.22, after getting out to a 55.99 split on the first 100.