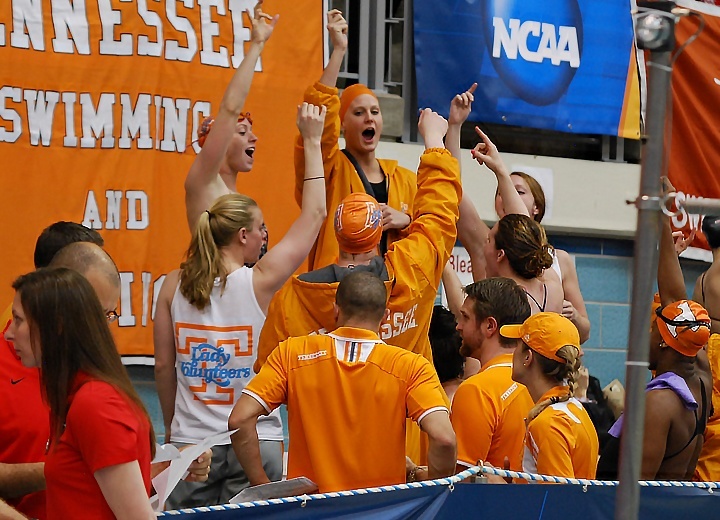 The University of Tennessee has made the decision to phase out the "Lady Vols" name for women's sports (with the exception of women's basketball). The teams will now be using the "Power T" logo and the nickname "the Volunteers" currently used by men's sports.

On Monday, November 10th, the University of Tennessee athletic department held a press release announcing that the “Lady Vols” brand name and logo will be dropped from all women’s sports including swimming & diving, but with the notable exception of the women’s basketball team. This announcement comes as a part of a university rebranding effort that will coincide with the school’s switch from wearing Adidas athletic apparel to representing Nike, effective July 1, 2015. All university teams besides women’s basketball will be referred to as the “Tennessee Volunteers” and use the “Power T” logo currently used by the men’s sports teams.

Women’s basketball will continue competing under the Lady Vols name out of respect for the legendary head coach emeritus, Pat Summitt, who was involved with first instating the brand with her team back in 1976. The women’s basketball program has achieved incredible success over the years, respected for winning eight NCAA titles with Summit’s leadership between 1976 and 2012. With this basketball legacy intrinsically linked with the Lady Vols brand, the University is allowing the team to keep its name.

The University of Tennessee’s chancellor, Jimmy Cheek, addressed the need for unity of the athletic teams as a way to promote the overarching goal of academic integrity for the school. “Brand consistency across the university is critical as we strive to become a top 25 public research university,” he said in the school’s press release. “It is important that we take advantage of all of the successes across this great campus, both in academics and athletics.”

Uniting the Tennessee women’s and men’s teams under one logo is also a continuation of movement that began with the consolidation of the men’s and women’s separate athletic departments, a merger that occurred in 2012. Additionally, the men’s and women’s swimming programs were combined in 2012, after a search for a new head coach for the men’s team. Head coach of the women’s swimming team, Matt Kredich, was chosen to take on the responsibility of the head coaching role for the men’s team as well, creating a joint swimming program at Tennessee.

The university’s most recent decision, to drop the Lady Vols name, is not not being met with unanimous support from students and alumni. One of Tennessee swimming and diving’s alumni, Tricia Weaner, started a petition online protesting the change and asking for the decision to remove the Lady Vols brand to be overturned. Her petition has now garnered over 4,868 signatures on the website, change.org.

Those protesting the change believe that the Lady Vols name is one that is iconic and representative of an incredible legacy of athletic success at the University of Tennessee. The name is cherished by these women who have competed with pride and respect for the Lady Vols name. Many are not willing to accept the change without putting up a fight.

“Tennessee is built on a tradition of excellence. The decision to take away the Lady Vol logo in all women’s sports besides basketball is truly heart-breaking,” said Weaner. “The Lady Vol T served as more than a symbol to me during my tenure as a student-athlete—it served as a fountain of inspiration. Before many races I reminded myself who I swam for—The Lady Vols. Taking the Lady Vols away is taking away a tradition like singing Rocky Top or the football team running through the T in Neyland Stadium. Simply put, it should not be done.”

Lindsay Gendron, a recent graduate of the team and a four time All-American, also had an opinion on the change. “Being a Lady Vol was an experience I will never forget,” she said. “During my time at Tennessee, I learned that being a Lady Vol is much than a symbol or name- it’s a lifestyle. What I’ve learned through my four years as a Lady Vol will be a part of me for the rest of my life. It is sad to see such a powerful image retire, but I am confident that the lifestyle of a Lady Vol can and will be passed on to the future women athletes of Tennessee.”

You can read more about the change on the University of Tennessee’s athletics website, http://www.utsports.com.

Tennessee next competes this weekend, November 20 – 22, at the Nike Cup Invitational in Chapel Hill, North Carolina.

Once a Lady Vol, always a Lady Vol. Nobody can define this or take away it’s significance. LADY VOL FOR LIFE.

As a die-heart Crimson Tide fan I could not believe it when I heard that they are taking away the Lady. As a father of 5 daughters and a sibling to 6 sisters I always believe that the title of Lady was one of respect, honor, and a person of great integrity. Did they take a poll of all the Alumni and students to see how this would be perceived?? From what I heard on the news they said the higher ups bowed to the pressure of some newspaper and a few men that wanted this change. I for one truly feel your sorrow at losing such a time honored tradition. Even as a Tide fan, you will still be… Read more »