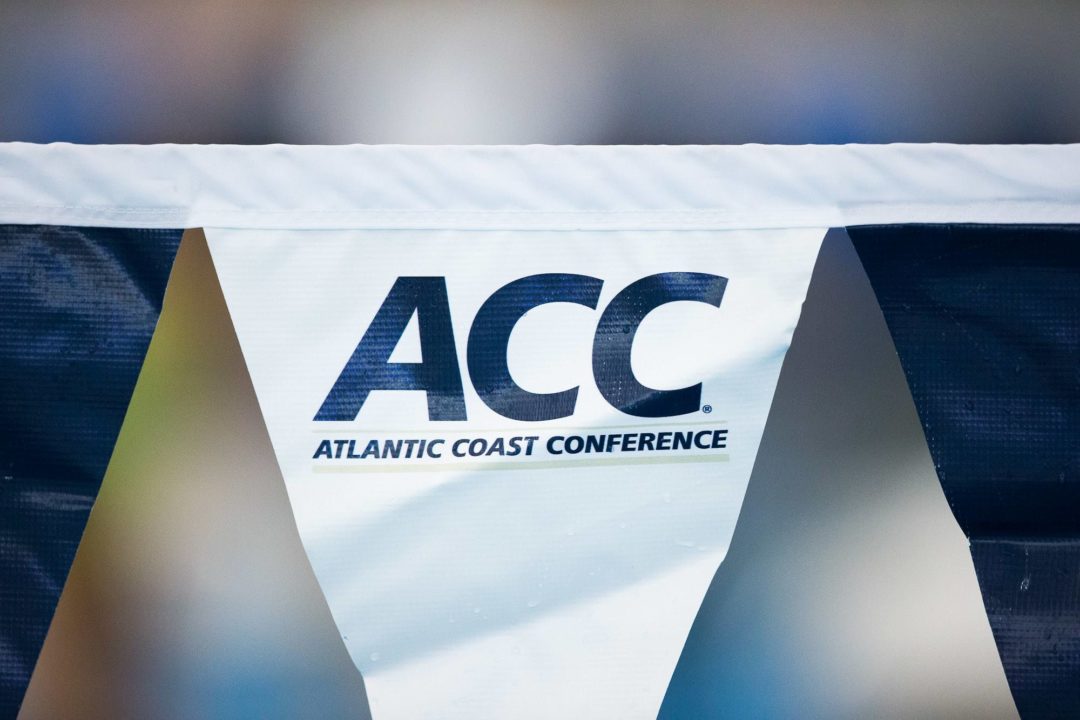 UVA had pulled ahead in the team scores after the 1650 freestyle and 200 backstroke events, but UNC’s depth in the 100 freestyle allowed them to pull back to just 15 points behind the Cavaliers.

Kelsi Worrell of Louisville continued her streak of breaking records and winning events in the 100 freestyle. Her time of 47.71 claimed the NCAA A cut and the ACC meet/ACC conference records that she set this morning. She was the only swimmer in this event under 48 seconds.

In the much anticipated race between Reaney, Simon, Cottrell, and Paluszek, all of whom were within a second of each other going into finals, it was UVA’s Laura Simon who finished first in a time of 2:07.48. Simon’s time is a new Georgia Tech pool record, besting Caitlin Leverenz‘s 2:08.22 from 2011. Simon also defeated Notre Dame’s Emma Reaney, who won the event last year and who still owns the ACC meet record, ACC conference record, American record, and U.S. Open record. Reaney, however, finished second in the event, in a time of 2:07.69, just behind Simon. Reaney was also under the previous pool record time.

Louisville got another win in the 200 fly by Tanja Kylliainen, who touched the wall in 1:53.19 to achieve the NCAA A standard, the ACC meet record, and the ACC conference record. The meet record had previously belonged to Megan Evo (Virginia, 2009), while the conference record was set by Chelsea Britt of FSU in December. Britt claimed second this evening in 1:54.09, a bit off the record time she had posted a few months ago.

Virginia Tech’s Klaudia Nazieblo and Emma Nunn of UNC were in a close race to the finish. In the end, Nazieblo touched in third place with a time of 1:55.16. She is coming off a 5th place finish in the 200 backstroke earlier this evening. Nunn finished in 1:55.68, dropping about a second from her prelims swim. In the rest of the heat, UVA picked up the 5th (Kaitlyn Jones), 6th (Jen Marrkand), and 8th (Ellen Williamson) places, while Notre Dame’s Courtney Whyte claimed 7th.

In an extremely close, nail-biter of a finish, Virginia Tech senior Kalyea Arnett placed first in the women’s platform event with a score of 295.30. In second place was FSU senior Katrina Young, whose score came out to be 295.10. Taking third is Emma Villarreal of Virginia Tech with 279.95 points. Arnett’s win, Villarreal’s third place score, and Kelli Stockton‘s 5th place score give Virginia Tech a combined 84 points to help the team stay squarely in third place as the ACC Championships near the close.

In the men’s platform event, Dominic Giordano of Pittsburgh posted the top score of 413.85, followed by JB Kolod of UVA (405.25) and Thomas Schinholser of Virginia Tech (370.00). These scores will carry over to the team scores next week during the 2015 men’s ACC Championships.

In the final event of the 2015 women’s ACC Championships, NC State’s sprint freestyle domination was clear. Alexia Zevnik, Riki Bonnema, Lotta Nevalainen, and Natalie Labonge took first in a time of 3:14.57, just off UNC’s ACC meet and conference records from 2014. They did, however, overtake the Georgia Tech pool record, set by Cal back in 2008.

The University of Virginia  came back from a deficit to UNC on Day 3 to win the meet for the eighth straight year. A major turning point of today’s session was their 1-2-5-8 finish in the 1650 freestyle. Their success in the mile was followed by wins in the 200 backstroke (Bartholomew) and 200 breaststroke (Simon). In the end, UVA was able to come back to the top because they qualified for the top finals in the morning, had a crew of top distance swimmers, and fought hard to move up in finals. For more information on the top swims and other major themes of the Day 4 finals, check back soon for SwimSwam’s analysis of this session.

anyone else dislike the live results format on the acc site?

oh my lanta thank you 😀