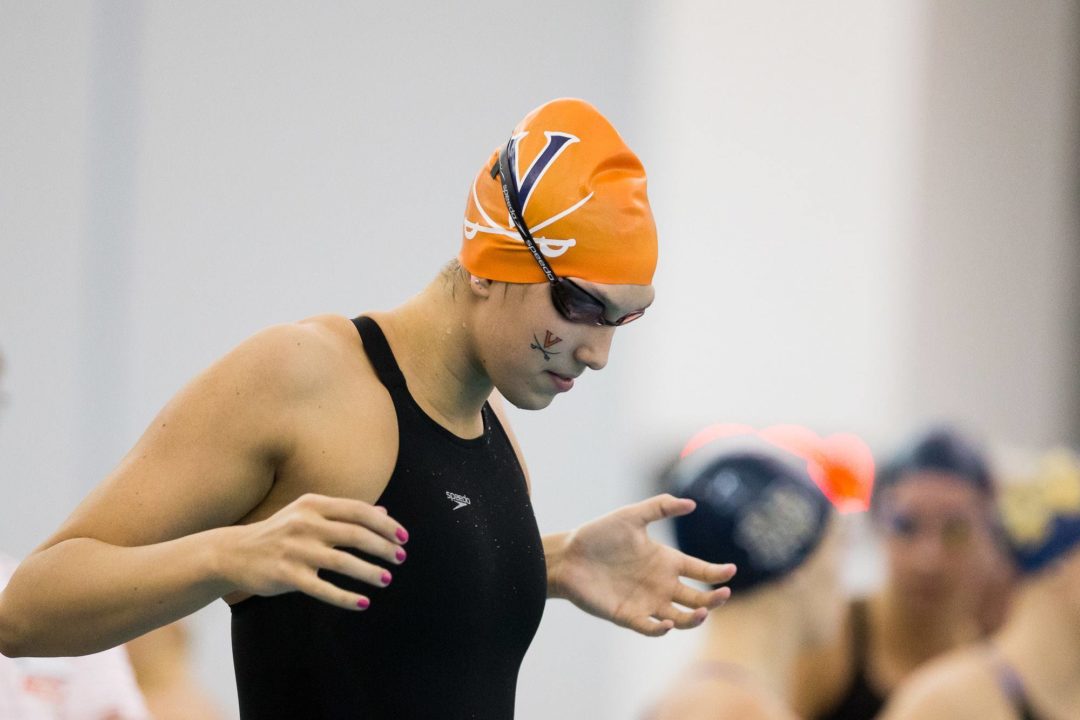 This is a real-time recap of the Day 4 prelims session – keep refreshing this page for event-by-event updates of all the action!

Also, be sure to follow our new live Twitter handle, @SwimSwamLive, for up-to-the-second results from this meet and the other conference championships happening across the nation.

Kelsi Worrell of Louisville was back in action in the 100 freestyle, coming off her historic swim in the 100 butterfly last night. She had her eye set on more records, taking down the ACC meet and ACC conference records (both belonging to Lauren Perdue) with a time of 47.86.

Worrell’s was the only 47 of the morning, but three other swimmers were able to post 48’s. Kaitlyn Dressel of Florida State will be second going into tonight’s final, finishing in a time of 48.78. Allyn Hardesty of UNC will be third (48.85) and Riki Bonnema, the winner of the 50 freestyle on Thursday, is seated fourth (48.86).

The final four places in the A final belong to UNC and UVA swimmers. Tied are Lauren Earp of UNC and teammate Danielle Silverling of UNC (49.19), followed by Ellen Thomas of UVA (49.20) and Caroline Baldwin (49.30).

The top four finishers were all within a second of each other this morning in the 200 breaststroke. Leading the pack into finals tonight is the American record holder from Notre Dame, Emma Reaney. Reaney’s time of 2:09.17 puts her just ahead of the second place finisher, Andrea Cottrell of Louisville (2:09.29). Also posting 2:09’s were Laura Simon of UVA (2:09.66) and Weronika Paluszek of VT (2:09.91). The Georgia Tech pool record is Caitlin Leverenz‘s 2:08.22, so it is very likely that one or all of these women could break that barrier tonight in finals.

Tanja Kylliainen will be the top seed heading into finals tonight. The Louisville senior finished in a time of 1:55.54, just ahead of Klaudia Nazieblo of VT (1:55.78). Tied for third place are Florida State’s Chelsea Britt and UVA’s Ellen Williamson with a 1:56.48.

Bobo,
Change of heart on Worrell?

Wow is this one going to be reeeaaalllyyy close between UVa and UNC.