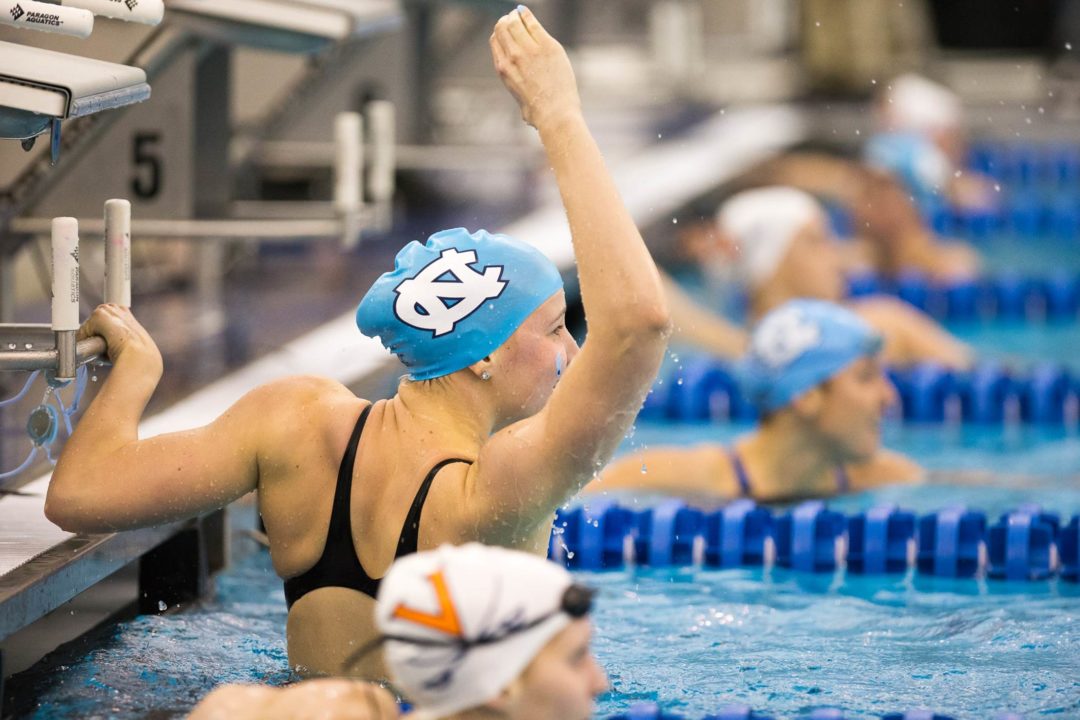 Team Scores as of Day 3 Finals:

Just 23 points stand between the current leader, UNC, and the runner-up and defending champion of ACC’s 7 year running, UVA. UNC and UVA are evenly matched in terms of ups/mids/and downs  in the first four events – the 200 backstroke, 100 freestyle, the 200 breaststroke, and the 200 butterfly. However, UVA has significantly more players in the 1650 freestyle this afternoon and a whopping four athletes in the top eight of the event. This may be the comeback UVA desperately needs to win the meet.

In the 200 backstroke, UVA and UNC both have three athletes in the top eight. UNC also has swimmers in the B and the C finals, however, whereas UVA does not. This gives UNC the potential to rack up some points to increase their distance from UVA. In the 100 freestyle, UNC once again has more swims – 4 in the A final and 1 in the B final. UVA only has 1 in each final. The 200 breaststroke is a less strong event in terms of depth for both teams, allowing teams like Virginia Tech, Notre Dame, and Louisville to see a larger number of athletes in the final. Both UNC and UVA have only 2 swims each in this final. In the 200 butterfly, UVA has two extra swims compared with UNC – 3 in the A final, and 2 in the B final. It appears that the 1650 freestyle will be the deciding factor. It will also give teams like Georgia Tech and Boston College a chance to get some more points on the board.

Virginia Tech and Louisville will likely be in the running for the third best team score. Currently, they sit just 23 points from each other with very comparable ups/mids/and downs. This race will likely come down to the 400 freestyle relay. It is way too close to tell who might come out of top this evening.

One last factor that cannot be left out is tonight’s 400 freestyle relay. UVA is seated first, followed by FSU and Louisville. UNC is currently seated fifth, but with less than two seconds between them and UVA, we can expect a close race among the top five teams. This meet will certainly be a battle until the end, and it is clear that the top two teams (as well as all the others) have set themselves up for a strong Day 4 finals session.

after 3m platform prelims, VT has equivalent of 3 ups, 1 mid; Louisville has only 2 down; VT likely to secure 3rd.
https://secure.meetcontrol.com/divemeets/system/livestats.php?event=stats-3511-7175-1-Started