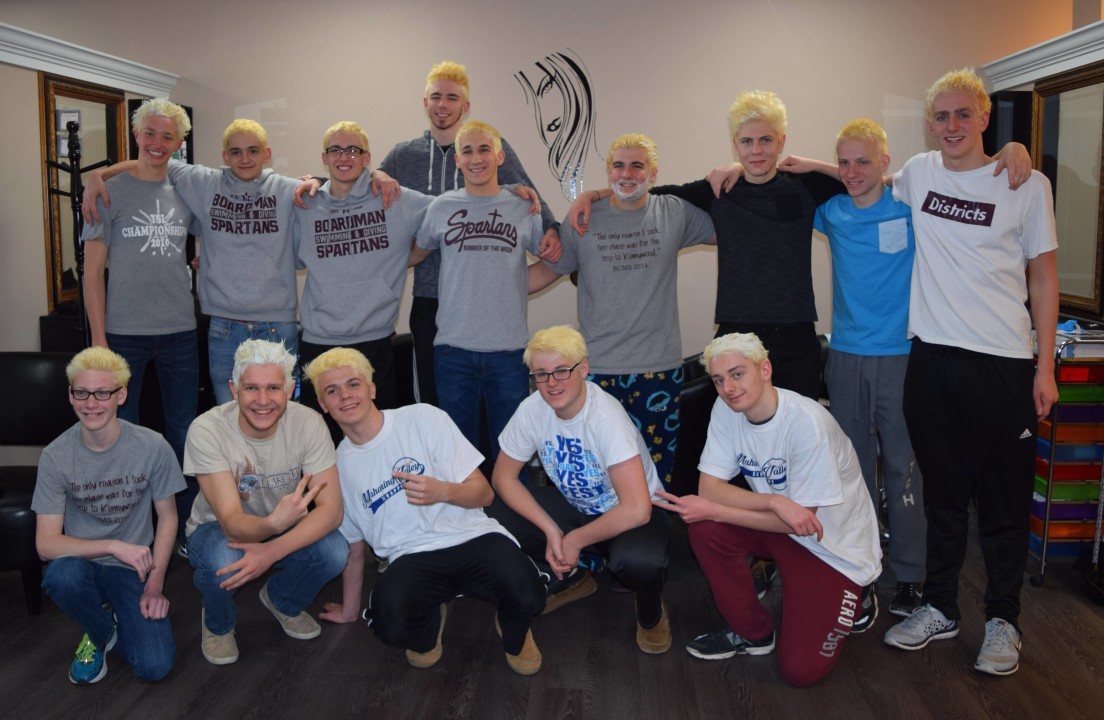 Shaving, eating, tapering....but what else gets your high school team mentally and physically prepared for championship season? Current photo via photo courtesy of Carlos Cordon

As high school athletes who compete in swimming as a winter sport are entering their championship season, they’re getting their minds and bodies primed to perform their best entering the series of elimination meets ahead.

Some teams will partake in the more common team traditions of shave parties, taper TV show marathons and pasta dinners, but others will carry out their team’s more unconventional championship preparation rituals.

Below are just two teams’ methods of tackling the intense next few weeks, all with team bonding in mind. How does your team’s compare? Tell us your team’s traditions in the Comments section.

According to Boardman High School Assistant Coach Carlo Cordon, the boys’ swim team has been bleaching their hair pre-tournament for years. “What once took place in the basement of our senior captains has now taken on a whole new level of team bonding in getting ready for tournament time,” says Cordon.

And how did this tradition originally come about? Explains Cordon, “About 20 years ago, Terry O’Halloran and I were looking for a way to get the boys’ team to bond more and to be a little more mentally prepared for their championship portion of the season.  We felt that if they swam these tournament meets more like a “unified team” and less as “individuals” we would have better results.” Thus, the ideas started flowing.

“We started hosting an end of the season pizza party for the guys at our houses, brought out a set of hair clippers and it pretty much took off!  We as coaches, shaved our own heads too, to show them we were all together. The hair dyeing began shortly after those first initial seasons and they now do the hair dye 2 weeks prior to shaving down.”

In terms of team effect, Cordon says that, “In the 20 years we have been doing this, the “team” aspect of it all has greatly improved our success at all the tournament levels.  They are unified and swim as a complete team.  We have had excellent support from the school administration and community which has given our team (both boys and girls) the recognition they work so hard to achieve.  The boys love going blond since it tells everyone that they are part of the Spartan Swim Team.”

Swim Team Captians Aaron Dunlany, Angelo Russo and Ethan Schwendeman all see only positives stemming from the pre-championship pump-up ritual.  According to Dunlany, the collective hair dying, “is one of my favorite parts of high school swimming.  It’s really fun to see how different everyone looks.  It’s a fun part of the season for all of us to hang out together one last time before our championship portion of the season.”

Russo echoes the appreciation of the bonding experience, saying ” it shows that we are part of something great.  I’m always happy when I get weird looks in public.  I get to explain that it’s a swim team tradition and how we are all in it together.”

Schwendeman acknowledges the team bonding after-effects, saying, “Nothing unifies the team more than bleaching one another’s hair, and surviving the next day at school together!”

Not all traditions and team rituals need to involve changing one’s actual body. Sometimes simply performing a single act together can pump up the team spirit factor. For the Perrysburg High School swim team, each swimmer signs an empty milk jug, then the team fills it with their own pool water, caps it off, and lugs it along with the team to the competitors’ pool. At dual meets, as well as sectionals and districts, the milk jug gets dumped into the host’s pool, “contaminating” it with Perrysburg’s esprit de corps.

To make the ritual of unloading the water from the jug even more meaningful, Head Coach Chuck Salmon (Alabama alumnus) personally selects the actual jug handler, based on his/her performance at the last meet or practice. As a rule, no swimmer can pour the jug more than once in a season, thus, almost everyone on the team has a chance to pour before graduation.

Says Perrysburg High School swimmer of the team ritual, Meghan Burnard, “It mentally helps us prepare for a meet because our team consists of 38 swimmers, and once we start the cheer, the pool gets silent because all of us together is very overpowering.”

She continues, “As a team this large we are very supportive of each other, there will always be swimmers cheering behind the lanes! As a captain on the team, I believe that cheering as a team during a race can change the way the swimmer performs! When we come together to cheer our team cheer we are all one voice, Perrysburg, and we are all heard.”

This is awesome seeing all of these rituals. Warsaw community High school, Indiana. We did a combination lots of these, before conference champs, we bleached, before sectionals we shaved designs for a day and then shaved completely. Also before every meet, we had a clay monkey everyone would kiss on the guys team and we would do a cheer which was simply yelling “HAIL THE MONKEY” while proudly holding the monkey in the air. It was made by a member in the 90’s in art class and kept in a briefcase that would get passed down from captain to captain. It was never washed between kisses. Also in the briefcase was a water bottle which held sacred water from the… Read more »

Please post a pic of the monkey, Patrick E.!!

Chapin High School in El Paso, TX. Wednesday night before District championship they would host their Carb Dinner in which parents made homecooked pasta. After dinner the boys would give eachother crazy ridiculous haircuts. Sometimes one half of the head would be shaved and the other half completely normal. Crazy designs. Sometimes an eyebrow or two would be gone. They would then dress up in ties and their best attire for school the next day and rock their hair. On Friday they would swim the district meet with their insane hair before completely shaving off everything for the regional meet.