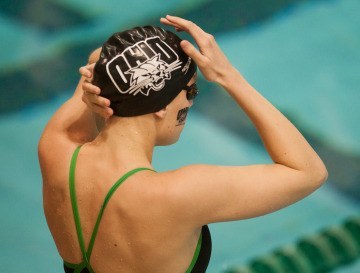 The previously undefeated Marshall University women’s team had their first loss of the season this weekend  against Ohio  University: 197.5 to... Current photo via Michael Pronzato | Ohio Athletics

The previously undefeated Marshall University women’s team had their first loss of the season this weekend  against Ohio  University: 197.5 to 107.5.

The Thundering Herd was lead by Canadian Sophomore Madi Pulfer, who had the only two individual wins for Marshall on the day. She won the 1000 by over a second- touching in  10:16.21. Second went to Ohio’s Ana Henderson who touched in 10:17.93. Pulfer’s 500 free time of 5:02.83 was also good for a first place finish.

The Bobcats took first in the remaining 14 events that were contested, which put them well on their way to their first win of the season (prior to this meet, the Bobcats were 0-3).

Junior Brit Laura Dawson was especially dominant in the 200 distances. She began the night by swimming the butterfly leg on the  winning the 200 medley with teammates Ferguson, Mackenzie Hornstra, and Haley Clark (1:46.26). Dawson went on to win the 200 fly (2:03.81), 200 back (2:01.51), and 200 IM (2:05.79). Dawson is in her second season with the Bobcats, having transferred from the University of Kentucky after her freshman season. She is the defending MAC Championships  winner in both the 200 fly and 200 back, and is also the school record holder for Ohio in both events.

Another strong individual showing for the Bobcats came from freshman Corrin Van Lanen. She took first in both the 50 free (23.71) and 100 free  (52.39). She was also second in the 200 free (1:654.98). The freshman also anchored the first place 400 free relay team of Barker, Clark, and Henderson (3:30.41).
Redshirt senior Stephanie Gyurke‘s performance in the 200 breast was also good for the school’s eight straight first place finish in the event (2:25.29).
Up next for the Herd will be three days of competition at the Nike Cup from November 19-21 in Chapel Hill. The Bobcats will return to competition at the Louisville Invite from Nov 20-22.