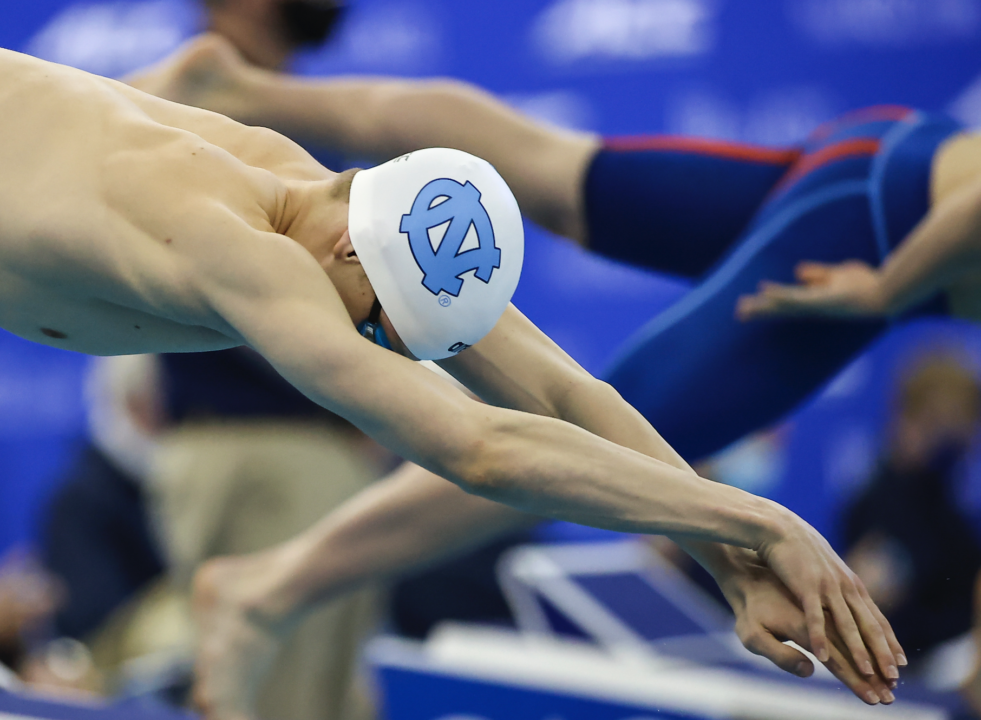 The UNC men and women swept their season-opener dual meet against Queens of Charlotte, winning with identical scores of 188-69. Archive photo via Jaylynn Nash

The Tarheel men and women both claimed decisive victories over Queens University of Charlotte in their season-opening dual meet. This meet marked Queens’ debut as a Division I team, after capping off its time in Division II last year with a pair of national titles.

Matej Dusa picked up a win for Queens in the 50 free, posting a 20.11. The next day when Queens took on Davidson, Dusa improved to a 19.86, ranking him fifth in the country.

The men’s meet ended with an exciting race in the 400 freestyle relay, where UNC’s Noah Rutberg narrowly held off Queens’ Jonathan Henschel to win by 0.77. Queens officially won the event due to UNC’s designation as exhibition, but it still made for an exciting finish to the meet.

On the women’s side, Grace Countie, Sophie Lindner, and Skyler Smith picked up two individual wins apiece for UNC. In the 50 free, Countie grabbed an NCAA B-cut and put up the fastest (bona fide) time in the country with a 22.24. She also won the 100 fly in a lifetime best of 53.86, marking the first time she has officially competed in the event since 2018.

There was a tight race in the women’s 200 free, as Queens’ Monica Gumina held off UNC’s Amy Dragelin for a 1:51.34, out-touching Dragelin by 0.16. Both Gumina and Dragelin were faster by about a second this year relative to their swims a year ago at the same meet.

Gumina was the 2022 NCAA Champion in the 200 free, and her time from last season is only about 1.3 seconds away from qualifying for the DI meet. However, Queens is not eligible for national championship competition until the 2026-2027 season, which is long after Gumina graduates.

Up next, the Tarheel men and women will make the trip to UNC Wilmington on October 21st, while Queens will host Wingate University and Emory University this weekend.

I was confused with the other Queens article three days ago where they had their first win.

This meet came before the Davidson meet. The posts were published out of order. Queens won meet #2 against Davidson.