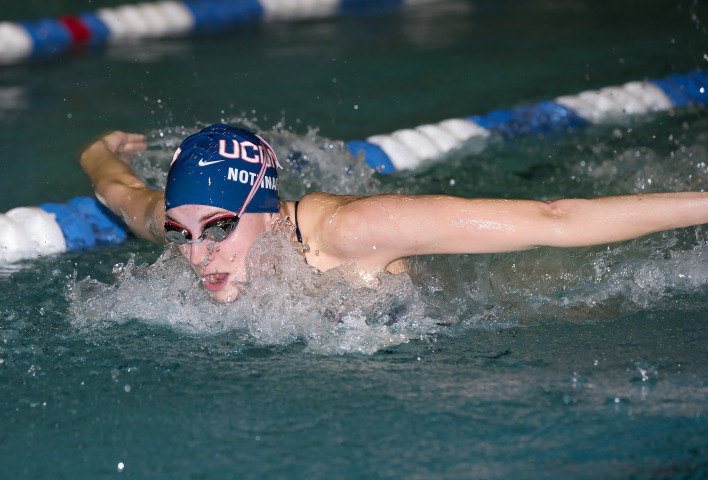 The University of Connecticut has hired former North Dakota head coach Chris Maiello to replace the retiring Bob Goldberg as the head of its men's and women's programs. Stock photo via UCONN Athletics

The University of Connecticut has hired former North Dakota head coach Chris Maiello to replace the retiring Bob Goldberg as the head of its men’s and women’s programs.

Maiello had spent four years leading North Dakota before the program was cut last month. Prior to that, he was an assistant with Navy for five seasons, coordinating recruiting for the Naval Academy swim program. Maiello also has head coaching experience with the University of Rochester and Darton College. He was an All-American as an athlete at Division III Hartwick College in New York.

He takes over for Goldberg, who had been the head coach at UConn for 29 seasons and had coached for 46 seasons overall, starting out as a diving coach at Penn State. Goldberg announced last fall that he would retire following the 2016-2017 season.

UConn competes in the American Athletic Conference, with the women taking 5th and the men 4th last season. Maiello’s North Dakota Fighting Hawks competed in the Western Athletic Conference last year with Maiello at the helm of both the men’s and women’s programs. The teams were cut along with women’s hockey as the university restructures its athletic department.

The full UConn press release is below:

In addition to his tenure at North Dakota, Maiello also brings a strong background as an assistant coach and recruiting coordinator at the U.S. Naval Academy (Navy) from 2008-13. Maiello also served in the Navy on active duty while at Annapolis, ultimately earning promotions up to the rank of lieutenant.

“I am very excited to welcome Chris Maiello and his family to UConn Nation,” said Director of Athletics David Benedict. “Chris is a proven winner and is an exceptional person. I heard many good things from people around the country about Chris and when I met him, I knew he was the person who should be leading our men’s and women’s swimming and diving program. Chris has an exceptional knowledge of the sport, places a high value on academics and mirrors the priorities we have here at UConn for our student-athletes.”

“I am humbled and honored to be selected to lead UConn’s storied program,” said Maiello. “UConn athletics has a rich history of success and I am excited to contribute to the department by leading the swimming and diving programs into the future. I am looking forward to continuing the traditions of the program while at the same time aiming for, and reaching new heights. I would like to thank Chief Operating Officer Beth Goetz, Director of Athletics David Benedict and the search committee for their confidence in my ability to lead the program and their belief in the shared vision for the program. I would also like to thank my wife Kimberly and our family for their never-ending support of my career goals and aspirations.”

On campus, North Dakota set 37 program records under Maiello and had a combined dual meet record of 59-33. In his short stint as head coach at North Dakota, Maiello doubled the win percentage for the program from 2012-13 to 2016-17. The women’s program also set a record for wins in a season with 12 in the 2014-15 season. Additionally, half of the programs all-time top 10 performances occurred during Maiello’s tenure.

The academic performance of student-athletes at North Dakota thrived under Maiello. Both the men’s and women’s teams have been ranked in the national top 25 of team GPAs by the College Swimming Coaches Association of America.

He also had his team involved in community service and increased the number of those hours each year at North Dakota.

“Giving back to the local community is an important aspect of our program and I look forward to the team serving the university and surrounding communities,” said Maiello.

While at Navy, Maiello served as the primary coach for the sprint training group and coached multiple school record holders, conference champions and five individuals to the 2012 United States Olympic Trials.

Previously, Maiello served as the head men’s and women’s swimming coach and aquatics director/instructor at Darton College in Albany, Ga. from 2006-08.

He was an assistant coach at the University of Rochester in 2005-06 and finished that season as the interim head coach.

He was the head coach at Amsterdam (N.Y.) High School from 2002-05 and coached the Amsterdam Sea Rams USA Swim Club.

Maiello is a 2002 graduate of Hartwick College in Oneonta, N.Y. with a bachelor’s degree in business management. He was a two-time All-American, and at the time of graduation, held the school records in the 100, 200 and 500-yard freestyle. He later earned a master’s degree from the United States Sports Academy.

Maiello and his wife Kimberly have a five-year old daughter, Vanessa, and newborn twin boys, James and Giovanni.

He’s the man. He works incredibly hard, cares about his athletes, and treats everyone well. Class act and can’t wait to see how he does!!

Class act? Gloating about the new job, while 40-50 kids are scrambling, trying to get thru the semester, with no clue on whether they will be able to swim in college again? He might “care,” but that’s a strange way to show it.

Congrats to you Chris! A great coach, a great colleague, and a great friend. Go Huskies!