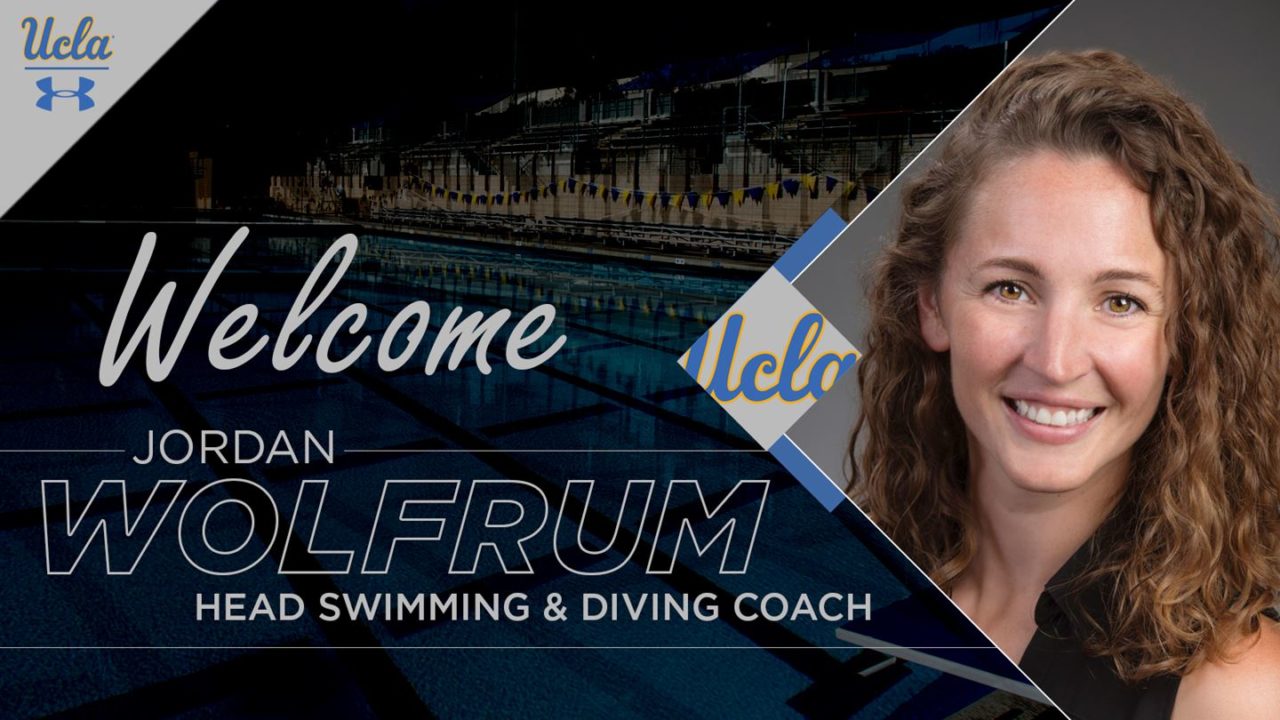 Wolfrum takes over for Cyndi Gallagher, who was at the program's helm for 31 years. Current photo via UCLA Athletics

“I am incredibly honored and excited for the opportunity to lead the UCLA women’s swimming and diving program,” Wolfrum said. “I am sincerely grateful to Director of Athletics Dan Guerrero and Associate Athletic Director Gavin Crew for entrusting me with this great responsibility and for bringing me into the Bruin family.”

Wolfrum takes over the women-only program after five years (three as associate head) for the Buckeyes. Prior to that, she was a volunteer assistant at Stanford and assistant for three years and head coach for one at the College of Saint Benedict. Wolfrum swam collegiately at St. Cloud State, graduating in 2009.

Her hire comes after former UCLA head coach of 31 years Cyndi Gallagher announced her retirement in May.

The UCLA women have not cracked the top-10 at NCAAs since the 2003-2004 season. Gallagher’s tenure saw the unveiling of the school’s $14 million Spieker Aquatics Center in 2009, which many thought would draw more national talent to the program, but the Bruins have not capitalized on the situation.

The team’s highest national finish under Gallagher came in her second and third seasons, when the team was fifth, and its highest finish in the past decade is 17th in 2013 and 2016, and 2019. Last season, the team scored 75 points in total at NCAAs, with 37 coming from Diver of the Meet Maria Polyakova, who notched first- and second-place finishes on the 3-meter and 1-meter boards, respectively.

Replacing Gallagher, Wolfrum is now one of the three female head coaches of Division I top-25 schools nationwide, the others being Cal’s Teri McKeever and Texas’ Carol Capitani. The UCLA position was the biggest opening remaining this NCAA offseason, which has seen heavy turnover in the Division I coaching ranks.

Alright, I’ll be the one who is puzzled by this hire. Even though I understand they wanted a female head coach, it seems like Stefanie Williams or Catherine Vogt were good fits, but maybe they turned it down. From what I’ve heard there were some male candidates with solid head coaching experience too that didn’t even get a look.

Hope she proves me wrong because UCLA is an elite university with elite facilities and could easily be in the top 10 every year.

Yeah everyone says great hire but nothing specific. So what group did she train at OSU? Can someone cite some specific swimmers she was responsible for their development? Did she handle recruiting? Come on give us something. Well at least OSU women out scored UCLA women in swimming 43-0 at NCAAs so there’s that. If she can come in and have some early success I bet she does well as I think the school sells itself especially with the California kids.

The school does sell itself to California kids but for many years club coaches have not sent their kids there due to a lack of development and a competitive swimming environment. While they could have hired a coach from somewhere in California, they have now chosen someone from about as far away as you can get. It’s going to take a lot of time to rebuild the trust that has been lost from the clubs in state.

To me this seems a little like the Stanford Men’s hire where they had to go young and hope it’s turn out positive. My guess is the salary just isn’t really competitive enough to get an elite head coach.

I’m going to assume that the salary thing you mentioned was a factor. My thoughts on this as well.

As associate head coach of a combined program at Ohio State, she coached middle distance for both women and men. The women there develop pretty well but the men really stand out. If I had to guess I’d say she worked closely with guys like Paul Delakis, Andrew Loy, Noah Lense, and maybe Ruslan Gaziev (unsure because he is more of a sprinter)

I didnt realize she coached the men also. Thanks for that.

There were also good female candidates who are currently Successful head coaches WITH PAC 12 and SEC coaching experience that didn’t get a look. Jordan is a great person and very nice girl, but seriously scratching my head on this one…

While you are entitled to your opinion on what they could’ve or should’ve done can we respect the fact that she has been hired and will be a leader of young women so I’m excited what this qualified WOMAN can do with the program.

>Jordan is a great person and very nice girl…

Seriously scratching my head on this one too.

If the diver took first and third wouldn’t she account for 36 points?

All their points were from two divers.

Wow, St. Cloud State women’s team is having an impressive week with alums being hired as coaches! Congrats, this looks like a great fit for UCLA!

This is a great hire, keep an eye on the Bruins. She will bring them back to prominence!!!

UCLA made the right move for their community and campus; let alone their program. Alumni should be at peace and absolutely stoked with the coach that they are getting. Good things happen to good people.

True. It’s such a cynical sport at times. For today I just celebrate that UCLA just made a great choice for the alumni and community and that a deserving coach is having her best day ever. Congratulations Jordan!

It wouldn’t be a swim swam article unless they found a way to bash UCLA….

Add a NCAA Div 1 level MEN’s swimming team back to UCLA’s athletic offerings, and you’ll be amazed at what their synergies will do for improving the WOMEN’s team!

Even Cyndi Gallagher said she felt that a men’s team would have elevated the entire program.

Please. That’s a lame excuse. You could have a great women’s only program at UCLA. There are women only programs/schools that have great synergy and probably do better not having boys there to muck it up haha

Whether it’s a recruiting issue or a training issue, the fact is that women’s only programs are at a distinct disadvantage to the programs with a men’s team (combined or separate). It’s rare for them to place top 25 at NCAAs and when they do it’s almost exclusively as a result of diving points.

Very good research – and I largely agree. If there were one school capable of bucking this trend, though, I would think it could be UCLA, with the right coach. That school has a lot of cache that could be a big draw if it hired a coach with big energy.

If women wanna swim fast they’ll swim fast regardless of men being there. It’s not a girls only school there are plenty of guys walking around campus and in class. Would be a plus not having to share a deck or pool time and can schedule practices whenever.

This is a great hire. A passionate, knowledgeable coach who has helped the rise of OSU’s program. She will do great things at UCLA.