UBC Women Set Canada West Records For Most Points With 1071 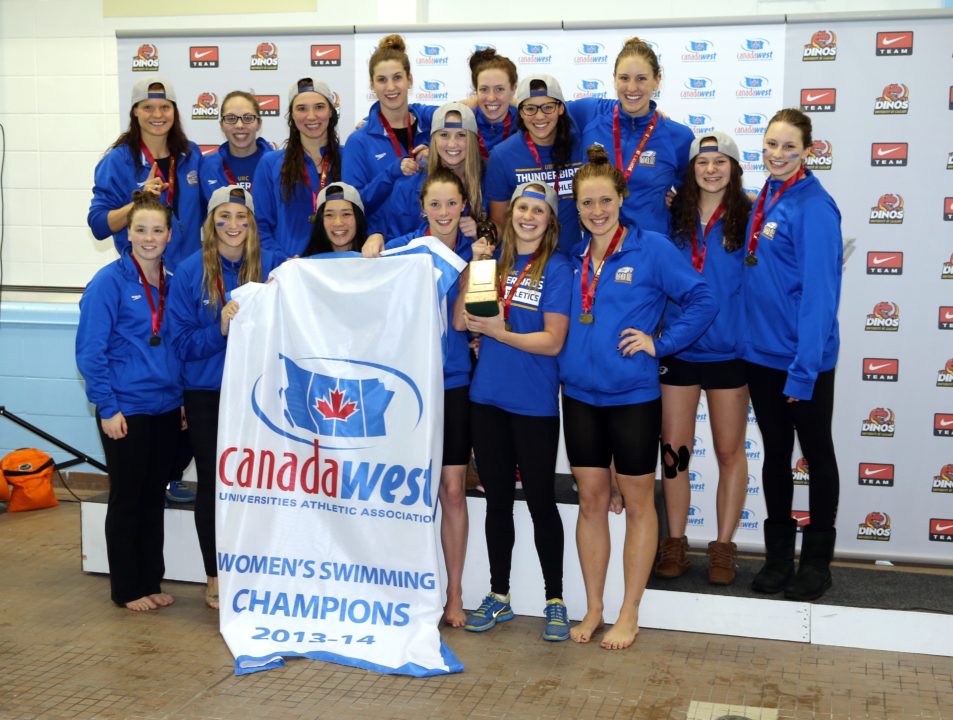 The UBC Thunderbirds men and women both came home with a big win today after finishing first at the short course meters Canada West Swimming Championships. The women dominated in every which way on their way to winning the team title with 1071 points (a new Canada West record) ahead of second place University of Calgary Dinos who had 574. The men won in a less yet still impressive 941 over Calgary’s 755. The conference win was the 25th all time for the women and 14th for the men.

UBC’s Coleman Allen set his third Canada West record tonight en route to completing a gold medal sweep of the fly events. Allen swam a 1:57.59 to reset the record and win the gold medal. Allen’s looking as though he could be a multi-gold-medal threat at the CIS Championships in Toronto which are now less than a month away. Allen’s outstanding performances earned him the Canada West Swimmer of the Year title.

Olympian Heather MacLean took the gold medal in the 100m freestyle in a 55.62. Her teammates Fionnuala Pierse and Rebecca Terejko finished second and third respectively to give UBC both the gold, silver, and bronze in the event.

The men’s 100m freestyle had three swimmers dropping below the 50 second barrier; ultimately Thunderbird Luke Peddie stepped up to take the gold in a swift 49.82 just barely out-touching Calgary’s David Woodman who touched in at 49.84. UBC freshman Stefan Milosevic finished third in 49.97.

The mens 200m IM was won by University of Calgary’s Russell Wood who grabbed the gold in 2:00.91. The 200m IM win was Wood’s third gold of the meet. Wood wasn’t finished and added another gold to his medal tally slightly after in the 100m backstroke with a time of 53.85.

The women’s 100m backstroke was won by UBC’s Erin Stamp who took home her second gold of the meet in 1:01.33 after winning the 100m breaststroke last night.

Olympian Tera Van Beilen came close to Martha McCabe’s Canada West mark in the 200m breaststroke by touching the wall in 2:24.35. Calgary’s Fiona Doyle finished behind Van Beilen in 2:25.86 followed by her teammate Tianna Rissling in 2:28.27. The three swimmers finished in that exact order at least year’s CIS Championships in the 200m breaststroke suggesting a repeat top three could be in order.

Olympian and UBC swimmer Savannah King dominated the 400m freestyle, taking home the gold in 4:08.39. King is currently the top ranked female distance swimmer in Canadian college swimming and won the 800m freestyle on night one. With that win it gave King her fourth individual gold of the meet. King was named Canada West Swimmer of the Year for the third season in a row with her outstanding performance.

The men’s 400m freestyle featured University of Calgary freshman standout Tristan Cote who finished second to UBC freshman Johnathan Brown. Brown won the event in 3:52.92 followed by Cote in 3:54.48. Cote is currently ranked higher than Brown on the total university rankings for the 3:49.72 (currently ranked fourth) that he posted in Toronto in November.

On night one the UBC Thunderbirds swept both the men’s and women’s 800m freestyle relays. On night two they did it again in the 400m freestyle relay. Tonight they held off all advances from the Dinos to take both 400m medley relays as well to complete a total domination of relay events at the meet.

After this finish at Canada West, the UBC Thunderbirds are looking like the favourites in the women’s team rankings heading into the CIS Championships, and quite possibly a first place contender in the men’s category as well. The CIS Championships will start in Toronto on February 20th.