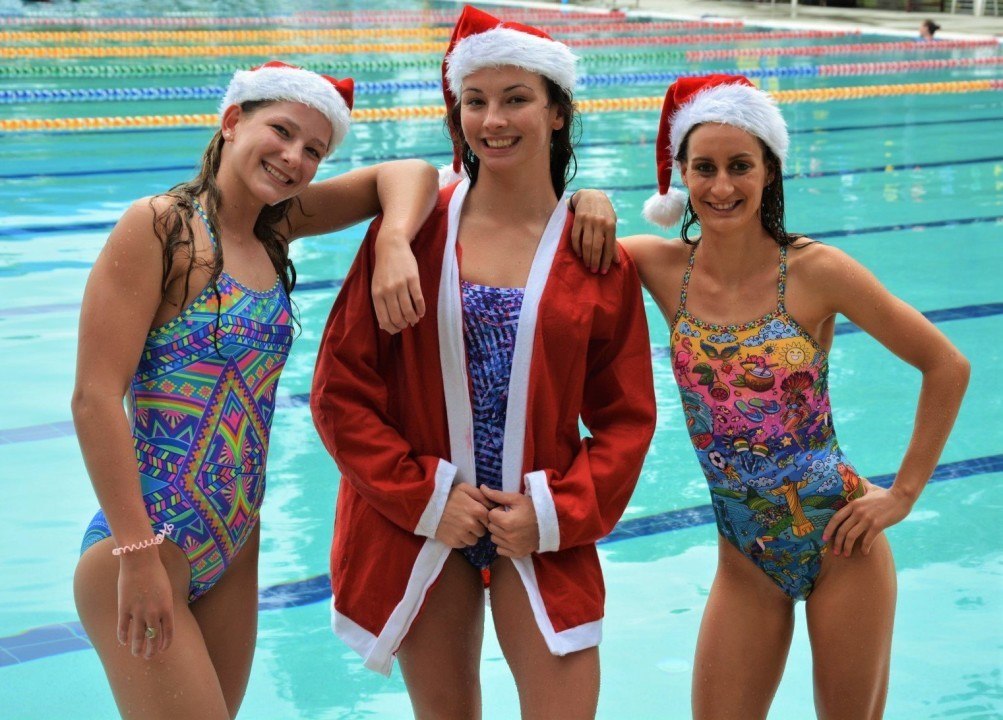 Celebrate the Holidays: SwimSwam style with a swimmer's take on the classic Charles Dickens poem "Twas the Night Before Christmas". Archive photo via Amanzi Swimwear

‘Twas the night before Christmas, when all through the house

Not a creature was stirring, not even a mouse;

The medals were hung by the podium with care,

In hopes that Caeleb Dressel soon would be there;

The coaches were nestled all snug in their beds;

While visions of test sets danced in their heads;

And Ledecky in her goggles, and I in my cap,

Had just settled our brains for a post-practice nap,

When out on the deck there arose such a clatter,

I sprang from my bed to see what was the matter.

Away to the blocks, I dove like a flash,

Tore off my goggles and took off my cap.

The moon on the breast of the now frozen pool,

Gave a lustre of midday to objects below,

When what to my wondering eyes did appear,

But a miniature trophy and eight fast Olympians,

With a coach who showed he was sure though,

I knew in a moment he must be Todd DeSorbo.

More rapid than Gators his swimmers they came,

And he whistled, and shouted, and called them by name:

On, Douglass! On, Finke! on, Smith and Bacon!

To the top of the blocks! to the push off the wall!

As leaves that before the wild hurricane fly,

When they meet with an obstacle, mount to the sky;

So into the pool the swimmers they flew

With mesh bags full of equipment, and Caeleb Dressel too—

And then, in a twinkling, I heard by the pool

The splishing and splashing of each little stroke.

As I drew in my head, and was turning around,

On the deck, Coach DeSorbo came with a bound.

He was dressed in red, white, and blue, from his head to his foot,

And his clothes were all wet with water it was put;

A whole bunch of sets he had written on his board,

And he looked like a man ready to win an award.

His eyes—how they twinkled! his dimples, how merry!

His stern mouth was drawn up in a smirk,

And the paper in his hands was as white as snow;

The tip of a marker he held tight in his teeth,

And the main set, encircled on the board like a wreath;

He had a broad face and a very large trophy

He was loud and commanding, a good swim coach,

And I laughed when I saw him, in spite of myself;

A wink of his eye and a twist of his head

Soon gave me to know I had nothing to dread;

He spoke not a word, but went straight to his work,

And gave the swimmers their set; then turned with a jerk,

And putting his hat on top of his head,

And giving a nod, across the deck he went;

He spoke to his swimmers, to his team gave a whistle,

And away they all flew like the down of a thistle.

But I heard him exclaim, ere they dove out of sight—

“Happy Christmas to all, and to all a good night!”

Just say no to eggnog.

Half of this is about DeSorbo yet it doesn’t even mention his ears??

The DeSorbo parts are cringe

I had a stroke reading this