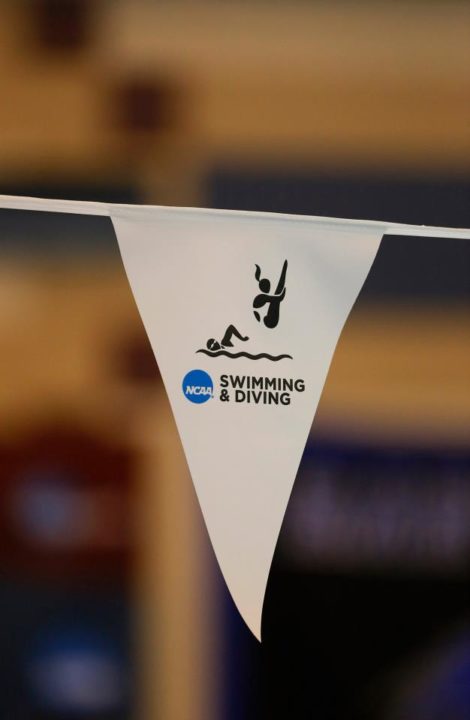 The Total Performance Invite hosted by Kenyon College in the James A. Steen Aquatic Center got its start tonight. There were only two events in this first session - the 800 freestyle relay and the 1650. Men and women from seven different Division I and Division III teams collected to compete. Current photo via Kenyon Athletics

The Total Performance Invite hosted by Kenyon College in the James A. Steen Aquatic Center got its start tonight. There were only two events in this first session – the 800 freestyle relay and the 1650. Men and women from seven different Division I and Division III teams collected to compete.

The night began with the women’s 800 freestyle relay, and Johns Hopkins’ women’s team made sure that everyone knew they were in the house. The quartet of Sarah Rinsma, Taylor Kitayama, Samantha Fox and Ana Bogdanovski stopped the clock at 7:22.44, over six seconds ahead of the second place team from the University of Pennsylvania. While everyone swam well, Kitayama and Bogdanovski’s splits are definitely eye-catching: Kitayama split a 1:49.83 on the second leg, and Bogdanovski anchored with a 1:48.26. These ladies will definitely be two to watch in the 200 freestyle come tomorrow!

JHU also fielded a B relay that took fifth – the team of Ellen Marcus, Alex Ladd, Sean McGrath and Emily Lubin, touching in at 7:34.24. Rounding out the top eight DIII relays was the team from DePauw University who took sixth, in 7:38.33. That relay was composed of swimmers Angela Newlon, Emily Weber, Kirsten Olson and Caroline Bridges.

The men’s mile followed. Chris Swanson of Penn won the event, breaking the meet and pool record in 15:06.86. Kenyon swimmer Harrison Curley took the runner up position, touching in 15:17.83. He was almost five seconds ahead of third place teammate Arthur Conover, finishing at 15:21.62. JHU’s Andrew Greenhalgh (15:24.21) and Kenyon’s Andrew Chevalier (15:31.25) rounded out the top eight DIII swimmers, taking fourth and fifth, respectively. The rest of the top heat went to Penn.

The women’s mile saw three Kenyon Ladies in the top eight. Mariah Williamson out touched a Davidson athlete by .16 to finish second behind a Penn swimmer, taking the silver with a 16:53.61. Teammate Syd Lindblom was fourth in 16:54.41, and Emma Stewart-Bates took seventh, also scoring the victory on a touch out to beat another Penn athlete by .05.

The final event of the session was the men’s 800 freestyle relay. Penn’s quartet of Dillon McHugh, Eric Schultz, Kevin Su and Rhoads Worster broke the pool and meet record by touching in at 6:32.64. JHU showed their speed again, and their men’s squad – the team of Evan Holder, Will Kimball, Patrick Flynn and Anthony Lordi – notched a second place spot in the event, finishing in 6:36.06. Three of the four were convincingly sub 1:40. The JHU B squad also made top eight; Joseph Acquaviva, Ryan Cunningham, Greg Kogut and Jeremy Bauchwitz combined forces to take over seventh, finishing in 6:47.63.

The action resumes tomorrow morning at 9:30 am with finals to follow at 5:30 pm. For live streaming of the event click here. For day one’s results, click here.