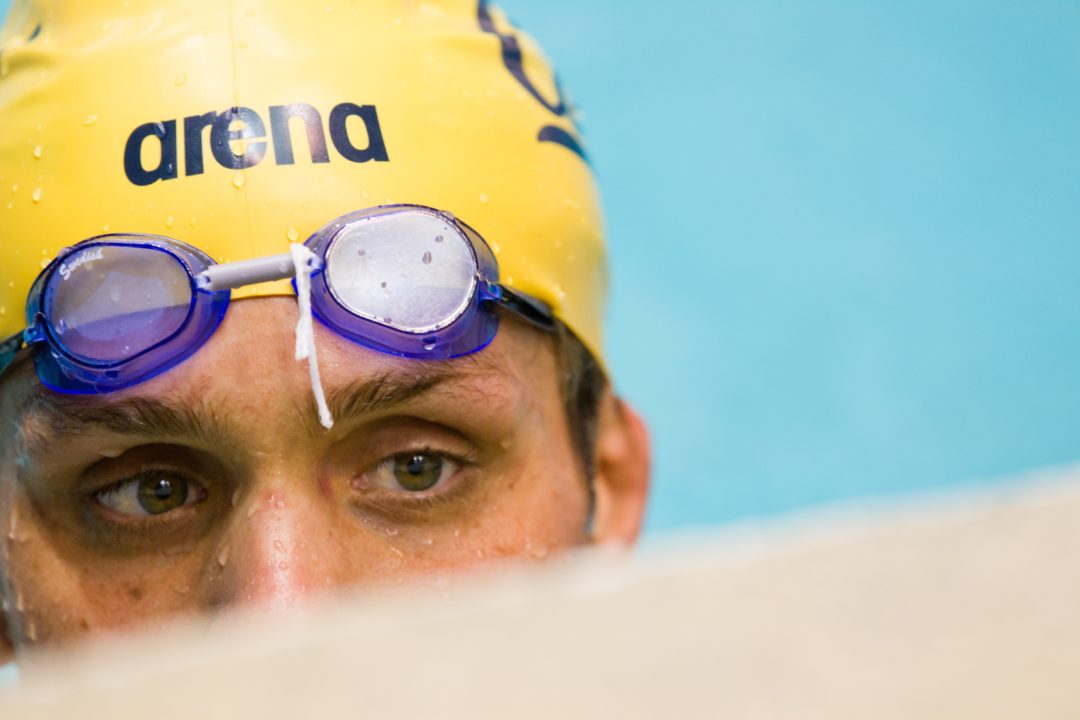 American swimmer Tom Shields was noticeably absent from Friday’s opening day of the 2018 FINA World Cup Series in Kazan, Russia, where he was entered to race. Shields says that he isn’t in Kazan.

“I’m collecting myself after a bit of a disappointment and trying to plan a return to high level competition soon,” Shields said of his absence. He didn’t put a specific timeline on his return, saying that he’s regrouping after Nationals.

Shields finished 4th at the 2017 FINA World Cup Series in the overall standings, including a win in the 200 fly at the Hong Kong stop of the series (which was the only butterfly race Chad Le Clos in the entire series). In Friday’s 100 fly in Kazan (a long course meet, as will be  Doha next week before the series reverts to its traditional short course meters), American Michael Andrew beat Le Clos 51.96 to 52.00 Russia’s Egor Kuimov tied Le Clos for 2nd place. Shields was entered in that event at the meet.

While there are lots of moving parts still, our most current projections have Shields qualifying to swim on the 2019 Pan American Games team.

The 27-year old Shields swam collegiately at Cal, and has been experimenting with self-training as he works his way back from a missed training block due to some health-related surgeries (deviated septum, tonsillectomy). He was a member of the 2016 U.S. Olympic Team, where he won gold as Michael Phelps’ butterfly understudy on the 400 medley relay. He earned the same medal in the same event at the 2015 World Championships, and also has 15 Short Course World Championship medals and 3 World University Games medals to his name.

Retire. You had a great swimming career.

He can retire when he wants to

agree with swim, he should retire.

As long as he enjoys the sport, then he should swim. Times aren’t the sole part of swimming, and his times are still very elite.

swimming is an interesting sport, in that you can be past your prime and still do it as your career, whereas in other sports like football or basketball, when you’re past your prime you’re done (or I guess you could go play basketball in China)

…it’s your insinuation that every football and basketball player ‘past their prime’ retires?

I’d actually argue that the complete opposite is true. Most swimmers retire the minute they come to terms with the fact that they’re past their prime (the financial opportunities in this sport dry up very quickly when you can’t win medals at international meets). Though, this mentality is certainly changing a little.

What about Marathon running or some open water distance swimming. There was a woman that made nationals in Marathon running at 50. You hear of Lynn Cox or Diane Nyland swimming in their 60’s. In Masters you have Laurie Val whose time in 100 meter freestyle would have placed bronze in the 1956 Olympics.

I agree. In games or ball sports, post prime athletes can “hide” their loss of skill through becoming a niche player, picking their spots, or becoming more crafty. Like an aging hitter laying off pitches outside his preferred spot, or a football receiver becoming a slot receiver rather than a deep threat. But Swimmers and runners have nowhere to hide; either you are fast enough or you aren’t.

That said, i seriously doubt Shields is weakening due to old age. Most likely just sub optimal training.

That reminds me the conversation with my cousin who ran couple of times the NY marathon and who hates cyclists and skaters because they can do pausing to get some rest during long race. The runner has to stop moving in order to do so.

Vote Up00Vote Down Reply
MY MOM!

50% of MLB players are past their prime (according to Elias Sports Bureau).

1 upvote to 26 downvotes, I think that’s a new record for me!

I would say it is exactly the opposite of that. There’s a lot more room in pro sports with big teams for a past-your-prime contributor, than there is for a non-medaling swimmer. Of course anyone who’s enjoying themself can keep going, but it’s tough to sustain financially.

There’s no reason for him to retire if he’s still enjoying it. His times this summer were not quite his best, but not that far off.

Arguably, Dara Torres was “past her prime” after 1992, but got an Olympic silver medal 16 years later.

Missed gold by .02 as well behind Brita Steffen.

Thought there would be a joke about recovering from surgery due to numerous pianos been dropped on his back during multiple 200flys.
He should keep swimming, find what he wants to, focus the 100 and do World Cup short course and enjoy.

Shields should go all in until at least 2021. He is probably going to short course worlds where he had quite the sucess. Altough it doesnt pay as much, being world short course medalist still can get you some money and for sure legacy. I long course wise, shields need to get another trainning group. I think his best options to make Tokyo a reality are 200 butterfly because its a weak event nowadays for the US team, and maybe if he focus a little in the 100 free he can sneek in a top 6, because that event alternates good results and average results in the US. So the relay maybe a possible. The 100 butterfly i think even… Read more »

I think 2fly is his only chance. And he really needs to review whether he need to find a different training group or his commitment on training itself.

I agree. I think power/speed is probably the last thing he needs right now.