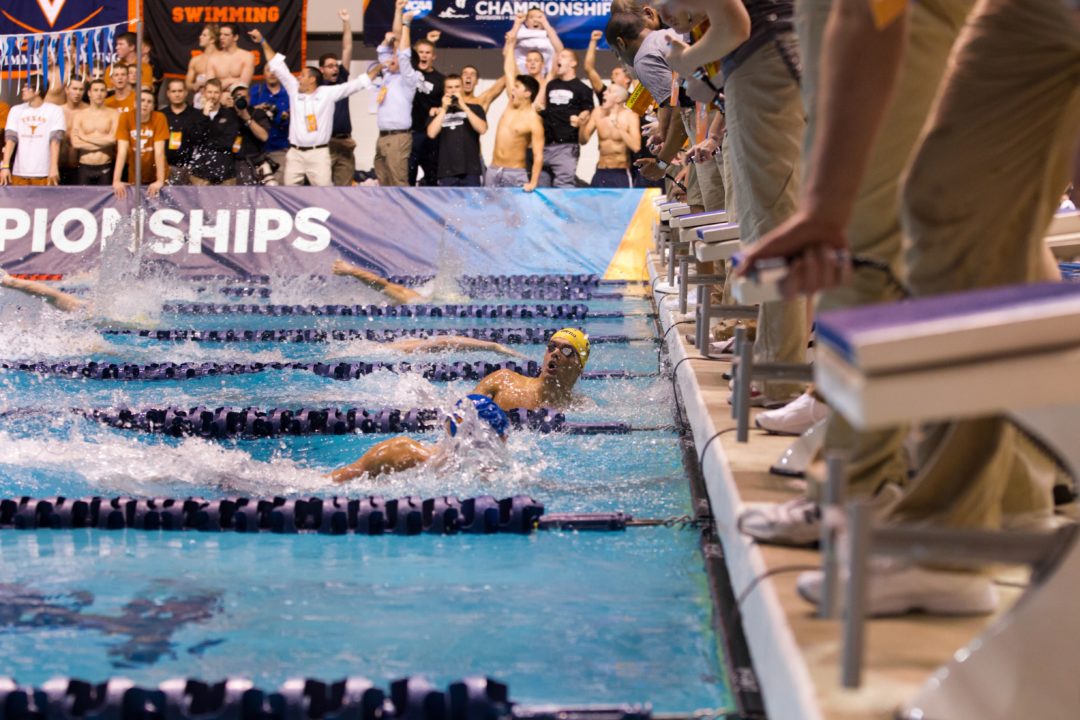 When the 84th Men’s NCAA Swimming and Diving Championships take place this week, more ambitious swim coaches will envision leading their charges to a team title someday. Perhaps one of them will be you?

The NCAAs are a coaching challenge like no other competition in the world. The qualifying standards are so difficult that for a coach to be able to assist his or her athletes to get to the meet, and then get faster at it, is more of an art than a science. To win a team championship, of course, means having a large number of athletes all prepared to excel at the right moment in time, which is a much more complex task.

The traditional training to coach a championship team might be thought of as being a successful swimmer in the NCAA system and then apprenticing as an assistant coach in a high-powered program.  But those are far from the road two of the greatest NCAA coaches of all time travelled.

Coach Matt Mann continues to hold the record for coaching the most men’s team championships at 13, while at the University of Michigan. Mann’s record has been approached by legendary coaches such as Ohio State’s Mike Peppe and Texas’ Eddie Reese, but the mark has never been equaled.

Mann was a British born age-group swimming champion, who immigrated to Canada before entering the United States as a young man. His passion for coaching was so great that in one season he coached the New York Athletic Club, Yale, Brooklyn’s Poly Prep, Lawrenceville, and Navy. Every team was a winner. His Michigan teams reeled off eight NCAA Championships in a row on their way to the eventual record of 13.

Coach Skip Kenney’s path to his run of success at Stanford was curious. Skip grew up as a diver. He did apprentice under a great coach, in Hall of Famer Don Gambril, who was actually a former football coach himself.  But Skip had little college experience having started his work with Gambril as an age-group coach at the Long Beach Swim Club and having only a short stint as Coach Gambril’s assistant at Harvard. Skip made the leap from being a club coach to college when he went from the Cincinnati Pepsi Marlins to becoming the head coach at Stanford. While coaching the Cardinal his teams not only brought home seven NCAA titles, but they also won a mind boggling record of 31 consecutive Pac-10 Championships.

The psychology of winning and managing a team was common to both these coaches, even though their manner wasn’t always what one would expect. Coach Mann became famous for never knowing a swimmer’s name. Each boy was “son” and each girl was called “honey.” Coach Kenney knew names but could seldom remember times. Skip could tell you how each swimmer performed, but just didn’t put a number to it.

The unique attributes of these two coaches helped make them successful. Skip learned the importance of the mind by serving in the military and spending some time as a sniper. Coach Mann seemed to understand the importance of tone, body language and caring, even if names escaped him. Coach Kenney and Coach Mann were unique, and so are you.

Each person that coaches swimming, or any sport, is welcome to steal like any artist does ─ ideas, theories, principles and more ─ but the ultimate presentation of those concepts will be filtered through the individual’s own experience and should be presented through their own personality, making it their art form. The coach that tries to imitate another only becomes a pale copy of the original.

A great coach in swimming is a great coach in any sport, or so Matt Mann believed. He passed away at age 77 after a full day at poolside. His athletic director called him, “the greatest coach to ever live.” He notably never mentioned swimming.

Great idea Lucy. Perhaps the greatest mentor of assistant coaches that swimming has ever seen.

Thank you, Chuck Warner, for mentioning, “a great coach, in Hall of Famer Don Gambril,” my personal favorite. How about including “Coach” in your “Lessons from Legends” with a list of all current and former Head Coaches he has mentored, including of course, Skip Kenney, plus Rob Orr and Jay Fitzgerald to name just 3.