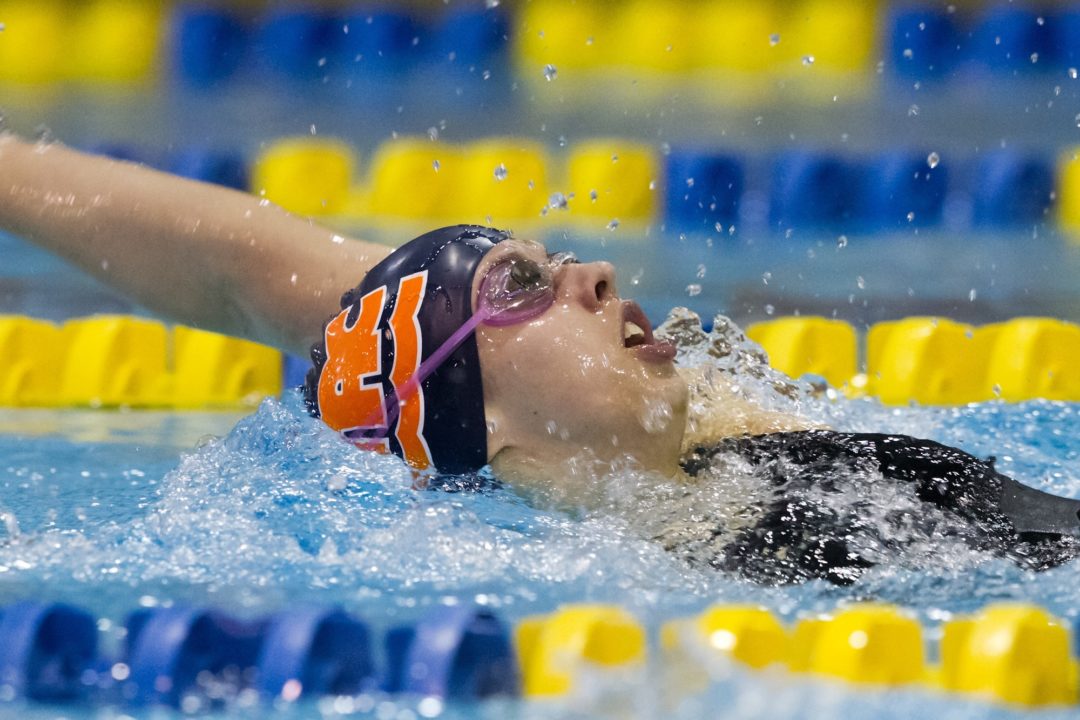 SwimMAC's Kathleen Baker is only 15 but could challenge the 15-16 100 fly NAG Record this weekend in Tennessee. (Photo Courtesy: ©Tim Binning/TheSwimPictures.com)

The Junior National Championships are a unique kind of meet. They are a championship, but at times are eschewed by the top junior swimmers, who would prefer to finish 8th or 9th at the senior championships than win a junior meet. Make no mistake, though: this meet is a crucial point of development for future American talent. That’s because it gives young athletes an experience of racing in an elite environment, but allows them to build confidence by racing against and interacting with their peers.

There are three different ways to follow Junior Nationals. The first is the most obvious: look at the top of the lineup, at the A-finals, the medalists, and see who is really fast. The other way is to scan down the results by age, and look for the first 13/14/15 year olds you come across, because these swimmers are the ones who next year will be at the top. The third is to look through prelims for the slowest seed times that made the A, B, or C finals. Swimmers at these meets are still in high school (and sometimes even in age groups) and there are still huge time drops to be had. Look for 16 and 17 year olds who drop two, three, four seconds; you know the college coaches will be.

Without further adieu, here are 6 stories to follow that will help guide you through this year’s Junior Nationals.

Click here to see the full psych sheets (note that they were updated on Tuesday).
Live Stream can be watched here.

1. Joseph Schooling Chasing History in 100 Fly – Ok, so there’s no official record for Bolles junior Joseph Schooling to chase in this 100 fly. Unofficially, however, the 17-year old is currently tied for 3rd on the all-time list of 18-and-unders in the 100 yard fly with former Stanford swimmer Matt McDonald. Any hint of a drop will move him into sole possession of third-place, which would leave only the legendary Ian Crocker (45.96) and Tom Shields (44.91) ahead of him, and both of those guys were only faster once they got to college. Either way, Schooling is easily the favorite to win this 100 fly and should do so in an impressive time. Watch for an impressive 200 fly as well; we saw his teammate Ryan Murphy put up a great 200 back at Winter Nationals last week after breaking a National High School Record in the 100 back; expect the same for Schooling and his top-seeded 1:45.0 in the 200 fly.

2. Kathleen Baker Has NAG Record Potential, Even at 15 – SwimMAC’s Kathleen Baker flirted with the 13-14 National Age Group Records last year in the 100 fly and actually broke the record in the 100 back. Now she’s aged up to 15-16’s, and despite being on the younger half of that age group could approach the new records already. Two years ago, with the times that Baker is swimming, and training at SwimMAC, already her name would be sung from the mountain tops in every corner of swimming. However, with so many stars in her events in the 16-18 age range (Franklin, Smoliga, Bootsma, now Janet Hu) recently, we haven’t been searching as young for that next big star. Baker, however, fits the mold with bests of 52.87 in the 100 back (top seed) and 53.46 in the 100 fly (2nd seed behind Nevadan Olivia Barker). The last time we saw her at a taper meet in yards, she dropped huge chunks of time, notably four seconds in the 100 fly. She’s only a second away from that NAG Record.

3. Horjesi and Poppe Battling in the 100 Breaststroke – This could be one of the really great races of the meet between two swimmers who are just barely starting to get noticed. Horjesi crushed the Minnesota State HS Record a few weeks ago at their State championship meet with a 1:00.16 as just a freshman (15); Poppe won the California North Coast Section Championship last year as just a sophomore in 1:00.91, and likewise holds the title as the fastest breaststroker of her class as well (she’s 16). Iowan Katharine Ross could pop up and join the party too. Poppe is the defending champion at this meet; we’ve only ever seen one swimmer break a minute at Winter Juniors (Mary Olsen), but could be looking for a 2nd this year. I certainly don’t think we’ve ever had a women’s breaststroke field this deep at the meet.

4. The Female David Nolan? – While it’s unlikely that Hershey swimmer Meaghan Raab will set national records at quite the level that her former teammate David Nolan did, the high school junior is certainly making every bit of the same impact on Pennsylvania High School Swimming. Through two years in the state’s biggest division (AAA), the junior has won four individual State Championships and three relay crowns. She holds the state records in both the 100 and 200 frees, anchored the fastest public school 400 free relay in the country last year. Despite all of that sprinting success, the 200 IM (where she’s the top seed in this meet) is arguably her best event. Her schedule will include the 100/200 free, the 100/200 fly, and the 200 IM.

5. The Youngest Trials Qualifiers Are Aged Up – The Phoenix Swim Club’s Keaton Blovad was the youngest swimmer at this summer’s Olympic Trials in Omaha, stepping in front of the bright lights and flames at only 13 years old. There, she swam to a respectable 63rd-place place out of 162 finishers in prelims of the 100 backstroke, her best event. Now she’s 14, though is only seeded 39th in the 100 back. Don’t expect that to hold, as she should fly up these rankings. Another baby of the Trials was Carmel Swim Club’s Claire Adams, who is also a backstroker. She’s been faster than Blovad in the 100 and will be seeded 12th heading into this meet in a 54.6.

6. Michael Andrew’s First National Championship – This meet will be the first National Championship event for the recently-turned-13 Michael Andrew out of Kansas. He tore up the 11-12 National Age Group Record books last year, and now his goals are higher: perhaps set on a senior nationals berth before he turns 14. His 20.94 freestyle is what qualified him for this meet, but he’ll use B-qualifying times to also enter the 100 fly, the 100 breast, and the 200 breast. Andrew hasn’t been all that fast this fall, as his efforts in the pool have been divided with football, but should be back in the pool full-time by now.

Im actually surprised Kathleen baker can’t put together a star studded 200 IM, or at least hasn’t (no offense). She is so good at every single 100 discipline- 49 free, 52 back, 53 fly, and 1:02 breastroke- and not to mention she is good in the 200 back breast and free, one would think she could at least go a 1:58 if not faster. Who know this may be her weekend for it!!!

Looks like the swimming gods have responded to you with a 1:58.02.

If they were fast, they would have been in Austin last week!

Also I’d say Ryan Murphy did a little better than 8th or 9th place. And Jack Conger always swims at Tom Dolan instead of Jrs.