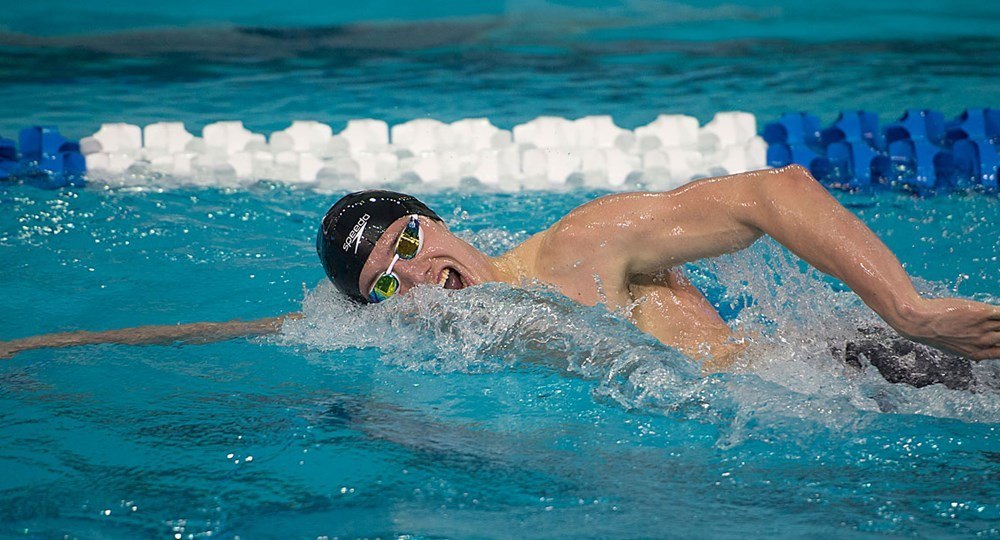 Sam Lewis kicked off the day for the Texas men with a dominant win in the 1000 free. Current photo via Texas Athletics

Bonnie Brandon, for Arizona, and Isabella Arcila, for SMU, each capped off day one of the meet with fantastic swims. Brandon kicked off her program with an otherworldly swim in the 1000 free to take down Texas distance star Kaitlin Pawlowicz. Brandon was out fast, in 4:50.70, however, this was just tenths ahead of Pawlowicz. Brandon turned on the jets and actually negative split the swim, coming back under 4:50 to touch in a blistering 9:39.03 to win the 1000. Pawlowicz had a mighty swim of her own, touching 2nd at 9:41.03. Brandon also took the 200 backstroke, edging Arcila 1:55.58 to 1:55.72, both very fast swims. Arcila’s big split in the 200 free relay of 21.78 on the second leg propelled the Mustangs to an upset win over both Texas and Arizona, and she also led off SMU’s 400 medley relay, which topped Arizona but fell to a Texas squad which was highlighted by a 1:00.27 breast split from Gretchen Jaques.

Arcila wasn’t the only one swimming fast for SMU, a team that has not been very impressive in dual meet season. At a meet hosted by Texas A&M only three weeks ago, Arcila was unable to break 2:00 in the 200 back, and Marne Erasmus, who placed third last year at NCAA’s in the 100 fly, couldn’t get under 58 seconds. Yet, the Mustangs certainly delivered today. Erasmus erased any doubts about her performance with a very solid 54.31 in the 100 fly to take the win and slip under the B cut. Joining her under the 55 second mark were Katja Hajdinjak (54.72) of Arizona and Kelsey LeNeave (54.77) and Brynne Wong (54.80) of Texas. Tallying a third win on the day for the Mustangs was Nathalie Lindborg, who rocketed to a 100 freestyle win in a time of 49.29, exactly one full second over 2nd place finisher Taylor Schick of Arizona.

The #1 Texas men flexed their muscles on day one, winning all but two events en route to garnering huge leads over both Arizona and SMU despite Joseph Schooling not swimming in any events. The Longhorns were off to a hot start, first with Sam Lewis owning the 1000 (9:02.18), touching over ten seconds ahead of Arizona’s Ty Fowler (9:13.89), who actually TIED with Longhorn Clay Youngquist, who usually swims the 200-500 free. Fowler was leading going into the final 50, but Youngquist couldn’t come back quite enough to eclipse the Wildcat for 2nd place.

The Longhorns rolled in the 200 free relay, led by a 19.52 split from freshman Brett Ringgold, touching at 1:19.32 after three of four legs broke 20 seconds (only Tripp Cooper was above 20 seconds, although we think a 20.09 is pretty darn close to being under). John Murray had a quick 19.88 to lead off. The Wildcats really slipped up here, as they DQ’d both their A and B relays, putting them in quite a deep hole for the rest of the meet.

SMU gave the Longhorns a scare in the 400 medley relay. The Mustangs held a slim lead after the breaststroke leg, and then, after trailing slightly going into the freestyle, sprinter Scherubl (who placed 2nd in the individual 100 free) nearly came back for the win. He split a 44.12 to Texas anchor Keith Murphy‘s 44.61, but Texas held on for the victory (3:16.88) over the upset-minded Mustangs (3:16.95).

These three teams will be back in action tomorrow at 10:00am CT for day two of the meet.

Cordes is the only man to break 1:51 as well IIRC