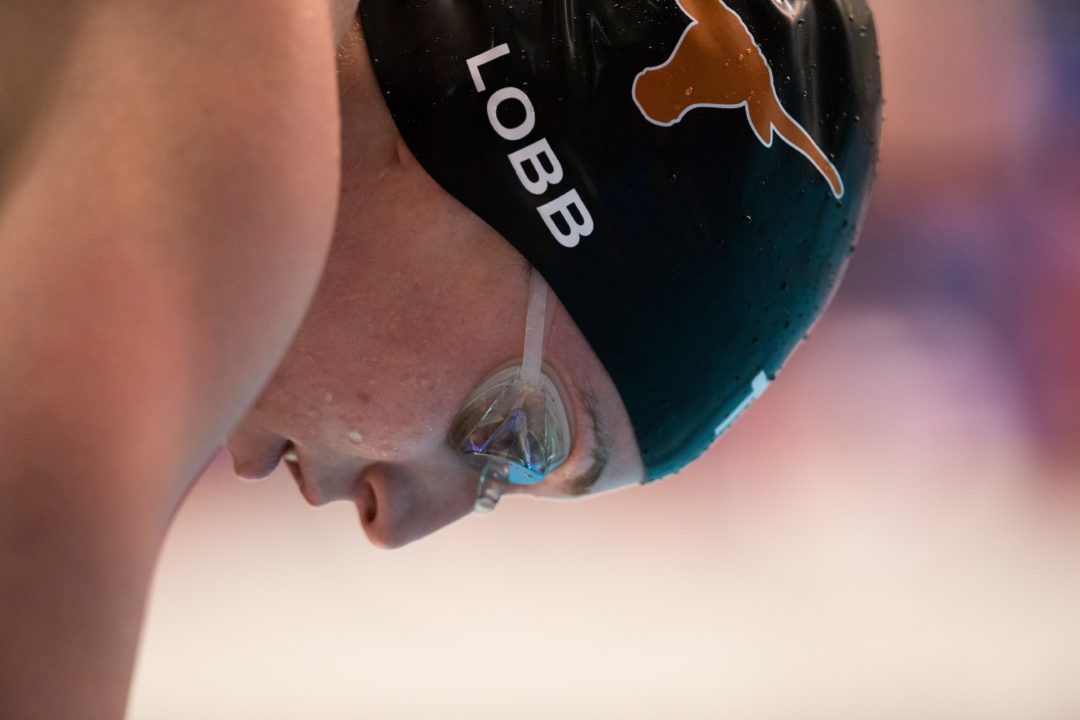 Texas' Ellen Lobb pulled off a big win in the 50 free over the defending NCAA Champion Margo Geer, Archive photo via Tim Binning/TheSwimPictures.com

There’s not a lot of drama at the top of the women’s Big 12, but the battle for bronze could be fierce between TCU, Iowa State and West Virginia.

We sat down with the Texas men’s assistant coach, Wyatt Collins, to pick his brain about the extremely storied Texas Tradition

The Texas Longhorns have swept the Arizona Wildcats in Tucson, finishing up a pair of forty point victories on Saturday.

The final score for the men was 194-153 in favor of Texas, with Arizona actually fighting Texas to about even on the second day of the meet with all of the diving completed on Friday; while the women’s final was 196-157 in favor of the Longhorns.

Though this score wasn’t as close as the meet between the two teams had been the last couple of years, it still felt like a close meet, as the Wildcat women won a whole lot of races in a losing effort.

In fact, Arizona kicked off the second day of the meet by winning the first two events. That started with a 1:41.54 – 1:41.74 win in the 200 medley relay. Aside from the 400 free relay at the end of Saturday’s session, all of the women’s relays at this meet were incredibly close and incredibly exciting.

This time, it was a match-up between captains Ellen Lobb (Texas) and Margo Geer (Arizona) on the anchor leg, and it was Geer’s 22.28 to Lobb’s 22.57 that took the win.

Texas has two more swimmers at 1:50.2 or better as well, as they rolled to four of the top 5 spots to stop Arizona’s momentum.

Lily Moldenhauer had a big swim for Texas with a 54.10 win in the 100 backstroke. She’s really coming through big for her senior season at Texas in a year where Sarah Denninghoff’s continued absence means that they need Moldenhauer’s speed in a big way. Brandon was 2nd in that 100 back in 55.49.

Texas showed off how they got the relay win on Friday in the 400 medley, their only relay win of the meet, by taking the next event as well: the 100 breaststroke. Gretchen Jaques took the win in easy fashion with a 1:01.67. Schoettmer, who was fabulous on Texas’ 200 medley relay and actually out-split Jaques there, was 2nd in 1:03.44.

The 200 fly went the way of the Arizona Wildcats with Ashley Evans winning in 2:00.25. Texas’ Kaitlin Pawlowicz was 2nd in 2:01.49, and Arizona’s Elizabeth Pepper was 3rd in 2:01.78. In terms of a group of swimmers whose really take the 200 fly as a specialty and focus event, Arizona has one of the best groups in the country, and that’s showed in their results this year.

Technically speaking, Arizona won the 2nd day of the meet by 18 points. Taking into account that Texas exhibitioned the last relay and individual event, the ‘true difference’ on this day was really more like Texas by 13 points on day two, but either way, there’s some takeaway for the Arizona men, in that they looked refocused and refreshed on the second day of this meet, and fought the Longhorns well.

The Arizona men started off with a win in the 200 medley relay in 1:29.07 to Texas’ 1:29.85. Texas was the better team for most of this relay, but a relay is done by four swimmers, and it just-so-happens that Arizona’s best leg is Texas’ worse. That made the difference, as Kevin Cordes (24.42) out split Charlie Moore (26.12) to give Arizona an insurmountable lead early.

Texas’ Clark Smith handled the 1000 free, which is quickly becoming a strong new event for him, in 9:11.94. Smith came out of high school as a great butterflier and freestyler, and Texas coach Eddie Reese has really been pulling some different races out of him in his freshman year. If Smith continues to work this distance angle, his sophomore year could be massive.

He sat it out, though, to swim the 200 fly instead, which he won in 1:46.59. This is a weak race for Arizona, at least in how they lined out for this meet, as their top finisher was almost 6 seconds back in 3rd place.

In between that 100 back and 200 fly was another Arizona win, and a no-doubter. Arizona junior Kevin Cordes was a 53.64 to win by over two-and-a-half seconds: a monstrous margin in a 100 yard breaststroke. Through all of the ups-and-downs of this season for the Wildcats, Cordes has been consistently the superstar that he is. That has been a big stabilizing force for the team’s performances, and one that they can always count on to “be there”.

Texas sophomore John Murray, who has been forced to take over that Jimmy Feigen sprint freestyle anchor role very early in his career, won the 50 in 20.51. Brian Stevens was 2nd in 20.63.

Arizona wrapped up the individual events with a good intrasquad battle between Eric Solis and Sam Rowan in the 200 IM. Solis came back from a big deficit (earned on the backstroke leg) to overtake Rowan on the freestyle leg 1:51.45-1:51.47.

Texas top finisher was an exhibitioned Austin Vacek in 3rd with a 1:53.16.

The Longhorns are now in ‘focus mode’ until the Big 12 Championships, with no more regular season meets left. Arizona still has a big rivalry meet with in-state foes Arizona State next Saturday before Pac 12’s.

Day 2 results only.
Full meet results in the same PDF.

Why is Denninghoff not swimming for Texas and where is Sam Pickens diving for Zona?

Denninghoff is taking a redshirt year this year due to injury.

Coach Carol is definitely heading this team in the right direction. Congrats to her and her team.